How Would You Make Act 1 Scene 5 of Romeo and Juliet an Effective piece of Drama?

For the whole play, I will have the Capulet’s as the main backdrop, but for Act 1 scene 5 it will be brought forward on the stage and will always be lit with the stage lighting.

At the beginning of the scene, I want the first two servants to come in to the hall and place the plates on the table. I want the ‘first servant’ to put the plates on the table with the feeling of frustration and say, “Where’s Potpan, that he helps not to take away? He (with an emphasis on the word ‘he’) shift a trencher! He scrape a trencher!” I would like the first servant to say this in a sarcastic manner.

Don't use plagiarized sources. Get your custom essay on
“ How Would You Make Act 1 Scene 5 of Romeo and Juliet an Effective piece of Drama? ”
Get custom paper
NEW! smart matching with writer

I then want the lighting made brighter on the second servant. I want him to say his line quickly but like an old wise man would. I want him to say, “When good manners shall lie all in one or two men’s hands, and they unwash’d too, ’tis a foul thing.

I would then make the lighting bright on all the stage so that everything on the stage becomes visible.

I now want the first servant to give orders to the other servant while doing other things as well. At this moment, I want the third servant to stroll in with no clue what so ever, of what he is doing. I want him to calmly say his line to the other two servants, “We cannot be here and there too, Cheerly, boys! Be brisk a while, and the longer liver take all.

At this point, I want the servants to walk off the stage and I want Capulet with all the guests to come up onto the stage form the other side. To make this entrance more dramatic, I would want the lighting to be focused on Capulet and the guests as they walk across the stage.

I would then like Capulet to give his big speech to his guests with the light brighter on him than on his guests, this way it will make Capulet seem more important to his guests and to the audience as well.

I now want Romeo to stand out in the crowd of guests and ask one of the servants about Juliet not knowing who she is.

I want Romeo to talk to himself aloud and say his speech to the audience as if he is in love. I want the lighting to be focused on Romeo this time and I also want his voice to be louder than everything else. This effect will give this particular part in the play a more dramatic feel that Romeo is in love.

Only at this point will I want Tybalt to be noticed. I want this recognition of Tybalt by the audience to be abrupt and I want Tybalt to now say in a quick, angry and sharp manner, “This by his voice should be a Montague.” I want Tybalt to then say in a hurried fashion to a servant, “Fetch me my rapier, boy.” I want Tybalt to carry on with his speech and progressively become angrier. I want his uncle to come in now and stop him. I want him and his uncle Capulet to be focused on by the light and sound around them. By this, I mean that I want the lighting to be focused on them and the sound around to be quietened, so that their voices are made louder and easier to hear by the audience. This will also show the audience what is happening in the play and who is more important.

I want Capulet to now have two sides to him. I want him to be very stern in telling Tybalt off and I also want him to have a kind side to him when he has to speak to his guests.

I want the nurse to come in between them now and disturb the calm between Romeo and Juliet.

I would like then for Romeo to ask the nurse, “What is her mother?” This question was because Romeo still did not know who Juliet was. When he finds out who she and her mother are, I want the lights to quickly close in on Romeo and for him to look very shocked and upset at the same time.

I would finally like Juliet to ask the Nurse who Romeo is and when she finds out, I want her to feel exactly the same way that Romeo felt when he found out who she was.

To close the scene, I want someone to call from within the house for Juliet and I want the scene lighting to fade away with Juliet walking into the house.

How Would You Make Act 1 Scene 5 of Romeo and Juliet an Effective piece of Drama?. (2020, Jun 02). Retrieved from http://studymoose.com/make-act-1-scene-5-romeo-juliet-effective-piece-drama-new-essay 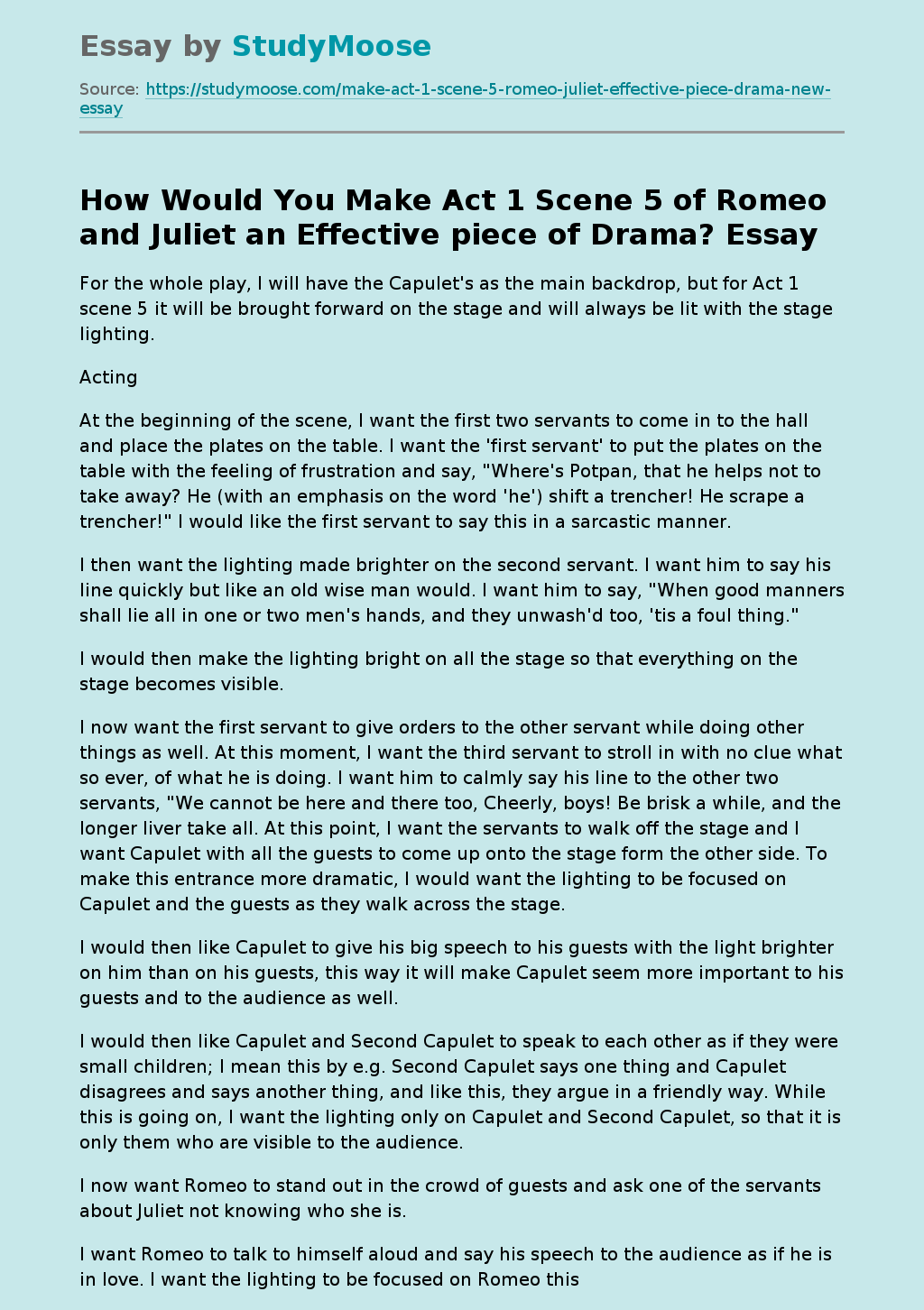