Majestica, a luxury hotel management service business began in 1970 in Western Europe. Majestica gradually expand to United Kingdom, United States, North America, Asia and so on. After a gradual expansion in Asia, Majestica become the world’s largest operators of luxury hotel and resort. Majestica earn by hotel ownership operation and hotel management but last five years they are concerning to managing hotel. All over the world, owner and developer of luxury hotels are attracted by Majestica because of their excellent quality.

Don't use plagiarized sources. Get your custom essay on
“ Majestica Hotel In Shanghai ”
Get custom paper
NEW! smart matching with writer

Their key success factor is management pointed to a service culture that they had fostered for decade. Moreover, their service culture is personal service oriented. Majestica’s try best to delight their customer by response to unusual request of the guest. This unique service culture leads Majestica to icon in hotel management business in the world.

They had two strategies to expand their business those are cautious to increase number of hotel and resort in their portfolio and operating philosophy.

In Asia pacific region Majestica didn’t take first moving advantage because of high cost to established new industry and they didn’t convince about political situation stability and existence of service culture. Majestica follow other major international luxury hotel chain and enter in Asian market. In 1990, Majestica changed its strategy to enter Asian market because it was the alarming time for them. China becoming the most competitive hotel industry and china’s economic develop and open door policy leads to china the second largest foreign direct investment recipient in the world. Finally, Majestica took the right decision to change strategy and enter in Asia’s largest competitive hotel business market.

China was sixth most popular destination for business and tourist and would be first positioned by 2020. In 2004, there were 423 hotels with 68000 rooms which expected to increase 11 percent by 2005. Shanghai Tourism Administrative Commission also forecast that tourist visiting will increase by 5 percent. Mid 1998 international luxury hotel chains took the advantage of changed government policy soon they took place in Shanghai. Shangri-la,
Hyatt international etc established and imbued thoroughly Shanghai luxury hotel market.

On that time Shanghai was the best location for Majestica because of market demand, future benefit, resource, competition as well as government policy. While CPS was publicly listed in Hong Kong gave Majestica more confidence about business transparency and independence from government influence. Majestica’s excellent performance and reputation attracted CPS and property owner to invest in Shanghai. As a result Majestica and CPS signed an intent and start negotiation. The challenging issue was the length of the contract and the control over the management of the hotel.

First of all, Majestica wants the agreement for 55 years while it was 10 years normal hotel management term in china. So both CPS and Majestica had to change their policy and agreed to 30 years operation period with a option to extend operation period. Secondly, Majestica expect to design and construct by their senior people while CPS interfere to take decision. Than Majestica convince CPS that it is important to take senior people to keep chain of consistency of a world class luxury hotel construction. Selecting the name of the hotel, Majestica don’t want to compromise. Then, Majestica want experienced person as general manager who will accountable for over all operation. CPS wants a Chinese person to be a general manager though there was not any enough experience Chinese person.

Then about expatriates, CPS wishes Majestica to train the local employees and eventually use them to replace the expatriates. Then CPS requested to Majestica to take a Deputy General Manager. In negotiation, CPS suggested to Majestica for purchasing all necessity from the local market. Majestica disagreed to CPS for allowing access to hotel rooms because of confusion. Finally, Majestica want to appoint a third party to resolve any condition but CPS didn’t agree to interfere of a third from outside China. For foreign investment law of China Majestica had to take 25 percent equity by the Majestica had to change the upper limit minority investment policy.

To increase the market share Majestica should relax its operating philosophy and take the opportunity to grave the leadership position in hotel industry in the world. If Majestica could change their philosophy and business practice than not only china but it could lead whole world and become global. To take this position Majestica need to change their management policy, market segmentation, human resource policy and aggressive expansion of hotel operating business. 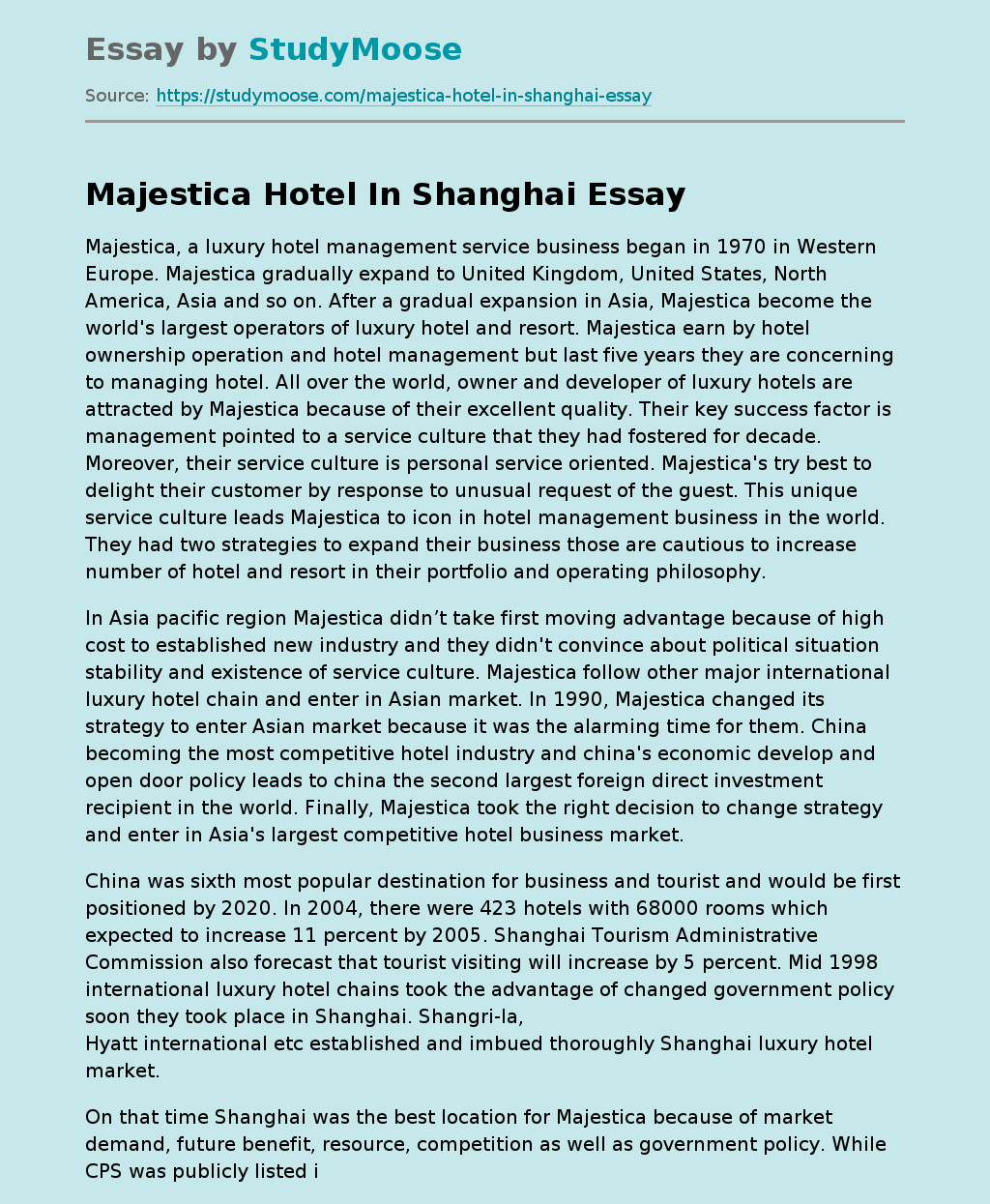