The Introduction in this book is almost as long as Frederick Douglass story, which I felt was a little unnecessary to be this long, but it did give me the chance to know a little more about Douglass, and the people he knew such as William Garrison a staunch abolitionist, who befriended Douglass. Next in the book come a couple of maps and a small preface which is written by William Garrison. I found this to be very interesting, especially the beginning when Garrison talks about the first time he met Douglass and the impression that he felt his from hearing him speak at an anti-slavery convention I feel this meeting strengthen Garrison’s beliefs in anti-slavery even more than before especially when he talks about his feelings of that moment.

Don't use plagiarized sources. Get your custom essay on
“ Main Theme in Frederick Douglass Story ”
Get custom paper
NEW! smart matching with writer

upon a crowed auditory , completely taken by surprise-the applause which

followed from the beginning to the end of his felicitous remarks.

never hated slavery so intensely as at that moment”(Preface 3).

When you finally get to Douglass’ narrative, my brain was bogged down with so much information, that I started to loose focus. At first Douglass story is very confusing because he seems to jump around a lot in the beginning especially when he talks about his early years with his mother and his owners. . There is so much information about his owner’s family and who the owner’s family works for that I lost focus.

For instance when he writes, “I have had two masters, my first masters name was Anthony. I do not remember his first name” (15). To me this did not make since especially when he talked about his belief that his father was his master, and than he starts talking about the overseer and how his master is another overseer. I think that his story would have been more successful if he could have written about his first owner in more detail before he started talking about the different people that were around him. All though I thoroughly enjoyed the book, I also did not think that the Historical Annotation at the end of the book was not necessary, because again I begin to get bogged down with facts that I believed were unnecessary to the book. I did however enjoy reading some of the reader response that were printed at the back of the book.

As far as my feelings of connection to Douglass’ story, I did get very emotional when I read his story, especially when he talked about the treatment of the Aunt by his first master. When Douglass talked about how he saw his aunt being beaten and the sounds he hear it broke my heart because I could picture him hiding, but not being able to drown out the sounds of the whip and his aunts cries and the feeling of being terrified that this could happen to him one day.

“He commenced to lay on the heavy cowskin, and soon the warm, red blood

(amid heart-rendering shrieks from her, and horrid oaths from him) came dripping

to the floor. I was so terrified and horror-stricken at the site that I hid myself in the

closet, and dared not venture out till long after the bloody transaction was over. 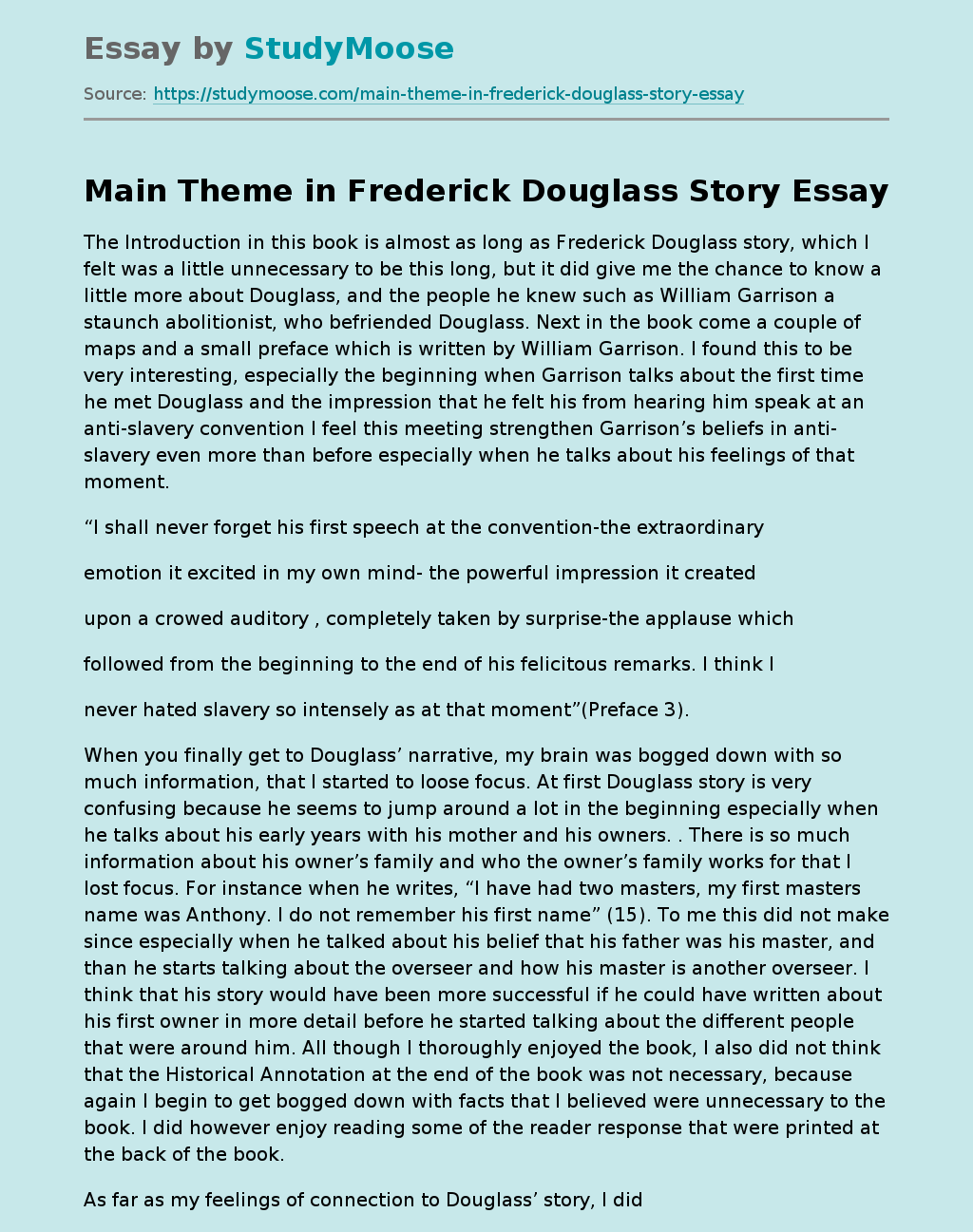