The first man was perfect, Made in the image of God and likeness (Genesis 1:26). Image in this case can not refer to the body; God is a spirit while man is earthly. Image here would mean the divine attributes that God endued man with, separating mankind from other animals. Short gives six God like qualities that man posses. These are language, creativity intellectual ability, dominion over the earth, love holiness, immortality and freedom (5). Some of these attributes are arguably not possible without including the body in the image.

Don't use plagiarized sources. Get your custom essay on
“ Main differences and similarities between God and human according to Hebrew Scriptures ”
Get custom paper
NEW! smart matching with writer

Man stands apart from all other living creatures because of his relationship with God. Grudem gives five aspects of our likeness to God. These aspects of human existence shows man to be more like God than the rest of creation. The aspects are: • Moral aspect: Human has an inner sense of right and wrong that set him part from animals. • Spiritual aspects: Man’s spiritual lives enable him to relate to God as persons, to pray and hear him speaking his word to him.

• Mental aspect: man has the ability to reason and think logically.

• Relational aspect: despite the fact that animal too relate to each other, the depth of interpersonal harmony in human relations; in marriage, church is much greater and function in accordance to God’s principles. • Man’s great dignity as bearers of God’s image. Despite the fact that man is in the image of God, God has no the physical form but is a spirit. b) Similarities and differences between the gods and humans, according to the Iliad Greek gods are not spiritual beings but are anthropomorphic.

They resemble human beings and tend to act in human ways.

They portray human emotions, virtues and vices. They further are organized into divine family, which imitates the patriarchy of human society. Iliad gods are much concerned with human affairs. Many goddesses would mate with human beings, sire children who would favor them in times of war. The Iliad presents an action on two planes, the human and the divine. The gods serves to emphasize the limitation of man, his short life, and the ultimate meaningless of human affairs. Work cited Short J. R, The image of God. Viewed on 09/07/10 from http://www.

answersingenesis. org/creation/v4/i1/man. asphttp://www. answersingenesis. org/creation/v4/i1/man. asp Dunkle R, classic origin of western culture. Viewed on 09/07/2010 from http://ablemedia. com/ctcweb/netshots/homer. htm Grudem. W, the Uniqueness of Human Beings: “In the Image of God viewed on 9/7/10 from http://www. creationbc. org/index. php? option=com_content&view=article&id=131&Itemid=5 Question 2: What is the covenant? (Gen: 12 and 15) The covenant refers to the Abraham covenant. Abraham is told to leave his people, take his wife and move to Canaan.

The covenant found in Genesis 12:1-3 reads: “and I will make you a great nation, and I will bless you, and make your name great and you shall be a blessing: And I will bless them that bless you, and curse them that curse you: and in you all families of the earth are blessed. ” Abraham would receive the seven physical blessings only if he would obey God. Nations in Abraham day would be blessed through Abraham .The covenant has four basic provisions, these are: • Special favor with God. • Land provision • Special favor to Abrahams physical offspring’s, and ,

• Special favor to Abraham’s spiritual seeds Relationship between Abraham Covenant and Mosaic Ten Commands of Exodus 20 The Mosaic Law was a bilateral covenant made specifically for Israel to govern her life in the Promised Land. From the Abrahamic covenant, Israel was a chosen nation, an instrument through which God would bless all other nations. Yahweh was her Theocratic king to rule and guide the nation to her destiny, protect the nation from pollution and contaminations by other nations hence fulfill the God’s intended purpose.

The Mosaic nation was hence instituted to direct Israel as a nation in all spheres of her life- morally, socially, politically, economically and religiously. Work cited Grudem. W, the Uniqueness of Human Beings: “In the on 9/7/10 from Image of God viewed http://www. creationbc. org/index. php? option=com_content&view=article&id=131&Itemid=5 Keathley H. j The Mosaic Law. Viewed on 09/07/10 from http://bible. org/article/mosaic-law-its-function-and-purpose-new-testament Question 3 The origin of evil and human suffering according to:

• Hebrew scriptures According to Rhodes, evil is something that is not an existence of its own: it rather is corruption of that which already exists. It is absence or privation of something good (3). Evil exist either as natural evil or moral evil. Moral evil is evil that we human beings originate: cruel, unjust, vicious and perverse thoughts and deeds. Natural evil is evil that originates independently human actions: in disease, earthquakes, storms, droughts etc. In Gen1:31, the original creation was very good. No sin, no evil and no death.

The turn down come after Adam and Eve choose to use their God given free will and violently chose to disobey him. Created in the image of God, man was given the risky gift of free will. Based on the above fact, it would be right to argue that God had the potential for evil, when he bestowed upon man the freedom of choice but the origin of evil came s result of man’s who disobeyed God for his own selfish personal desires. • Sayings of Buddha According to Buddha, craving is the root cause of all human suffering. To him craving is the central evil that reduced life into a bundle of painful despair.

As long as there were delightful and pleasurable things, the craving would persist. Craving takes root in the sense, in the eye, in the ear, in the nose, in the tongue in the mind and in the body. Sensuous craving causes accumulation of present and future suffering. These accumulated craving then leads people to various form of conflicts and quarrels or wicked acts like stealing robbery or seducing other men’s wives which results in deadly pain or death ( the noble truth of the origin of suffering). • Hesiod in Works and Days According to Hesiod, gods keep secretes of an easy life away from men.

From Hesiod’s work, Prometheus was able to snatch the gift of fire from man, pilfering it from the gods; this angered Zeus who vowed to curse men. He sent the evil seductress Pandora them “all gifts” like diseases, pain and evil. Hesiod believes that all women are wily, wiggling traps to lead men to destruction. God keep men helpless, men then live lives of toil to avoid starvation. Work cited Rhodes. R, Notes on the Problem of Evil. Viewed on 09/07/10 from http://ldolphin. org/evil. html Question 4 Meanings of the Hebrew words for prophet The common word for prophet in Hebrew is nabi and meaning spokesman.

Other Hebrew words associated with prophetic figures are hozeh and ro’eh, both meaning some one that sees. Nabi and Hozeh are close synonyms. The roles a prophet filled during the period of the Hebrew Kingdom, from Saul to the exile and return from Babylon Prophets played an important role in Israel political life. In the monarchy and rise to power of Saul, Samuel played an important role in the decision and action. Samuel was at the frontline in the appointment of David (1sam 8-12; 15-16). Even prophets who had a strong burden to correct false religious practice like Hosea addressed political issues strongly.

“Prophet’s reward” in Old Testament times In the Old Testament times, each prophet had to pass through pain of rejection, self doubt, persecution, and ultimately vindication only after the unfolding of history validates their prophetic utterances. Jeremiah, after many years of warning his people of unidentified evil coming from north, wearied by the non fulfillment of his prophecies, even his family members plotted against him to take his life in order to silence him.

Differences between visions and messages of the prophets Prophet in the bible were not were not primarily foretellers, they in addition seeing would criticize the present wrong doing, injustice, oppression, and rich , luxurious worship while the poor starved. Amos, for instance looked at the future often to warn. He warned against disobedience and its repercussions. Bible dictionary: Prophets, viewed on 11/07/10 from file:///C:/Documents%20and%20Settings/User/Desktop/prophets. htm

Main differences and similarities between God and human according to Hebrew Scriptures. (2016, Sep 08). Retrieved from https://studymoose.com/main-differences-and-similarities-between-god-and-human-according-to-hebrew-scriptures-essay 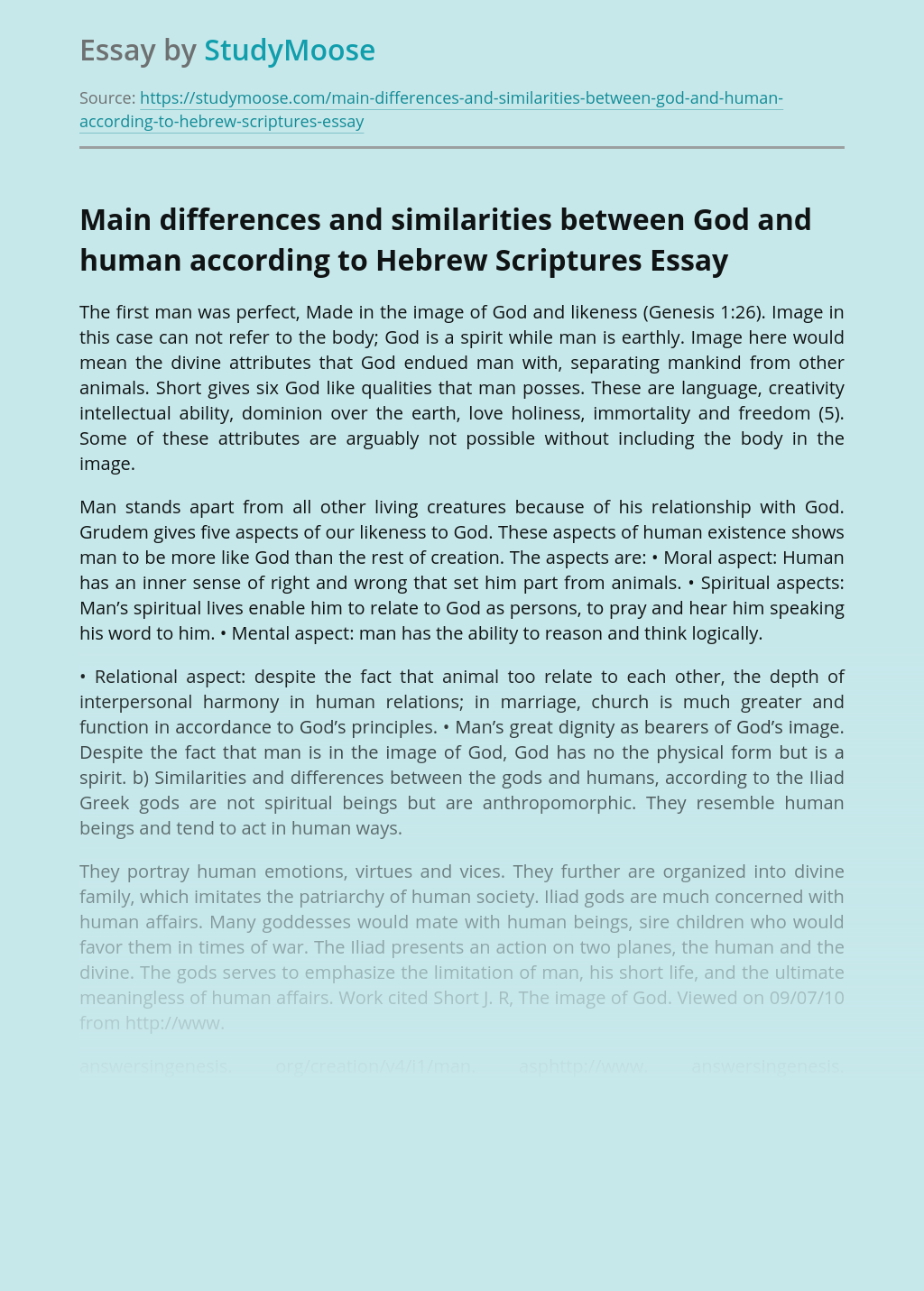