In Gustave Flaubert’s Madame Bovary, the story predominately follows how Emma Bovary becomes disenchanted with her lifestyle as the wife of Charles Bovary and seeks to find the unobtainable life she so desperately dreams of from the books she reads. However, before all of that, Charles Bovary has a history of his own with a previous marriage and a dreary childhood. In the passage describing a request for his services and his journey to a distance farm, the descriptive imagery and juxtaposition of his thoughts convey how static his character is.

Don't use plagiarized sources. Get your custom essay on
“ Madame Bovary Analysis ”
Get custom paper
NEW! smart matching with writer

Flaubert chooses to describe Charles Bovary’s demeanor and actions as easy going to illustrate to the audience how his personality is both average and carefree. When a man frantically comes to their home in the middle of the night with a letter requesting Charles to set a broken leg, he “lean[s] his elbow on the pillow to read it” (11). Disregarding the fact that the situation is considered to be an emergency to many, Charles leisurely takes his time in his own comfort.

This goes back to his growing up when chose to not prepare for his examination, resulting in his failure. He does not understand the gravity of circumstances and does everything as he pleases. This is further exemplified when he decides to leave “three hours later,” all “well wrapped” and moving in a “peaceful trot” (11-12).

Rather than trying to get there as fast as he can, he goes at a pace where he can even fall asleep.

He has little to no concern for the patient that is urgently waiting for him to put him out of excruciating pain. He has to make an attempt to “recall the broken leg” along with any knowledge he has on how to fix it during the journey (12). His lack of ambition is prevalent in this scene as it brings up his past apathy towards his schoolwork, which is catching up with him now, along with his currently indifference towards his work. He has no desire to excel in his job; he is perfectly content being an average man doing average work. This insight to his character shows how for a good portion of his life already, he has little to no goals in life and will most likely never strive to go above the ordinary. The description of Charles lethargically treating his job reveals his unchanging dispirited outlook on life.

Flaubert’s use of juxtaposition when Charles is confused between his memories from long ago and from now to elucidate the lack of development within his character. He becomes disoriented between his life as a “student and [a] married man” because of his similarities in them, leading back to the idea that he has not changed much within the past years (12). The way he goes about regarding any task, whether it be in school or in his current home, is very calm and passive. He is already a grown man with a job and a wife, yet his personality has remained unchanging. The reflection that he has unveils to us how, due to the stationary nature of his character, time has passed in a continuum such that he cannot distinguish when moments of his life have passed.

Comparing his life in medical school with the “iron rings of the bed curtains running on their rods” to his present life in a home with “his wife sleeping,” though most would think them to be vastly differing, the way he approaches them is the same—laid back to the point where he cannot distinguish between them anymore (12). By placing these two scenarios next to each other, Flaubert signals to the readers that, similar to how Charles has not changed from his childhood to now, he will continue to remain this mediocre man even in the future. Although we do not know why yet, this mindset of his seems to have importance towards the rest of the story. Altogether, the juxtaposition of Charles’ former and current self highlights the importance of his ordinary persona.

Flaubert’s use of language brings out Charles Bovary’s passive behavior, indicating a significance in his sedentary character for later chapters. Charles’ easy going demeanor, not laudable nor detrimental, seems to be a base off which other characters are compared to. Since he does not strive for much nor cause harm, he acts as a norm for people to relate to. 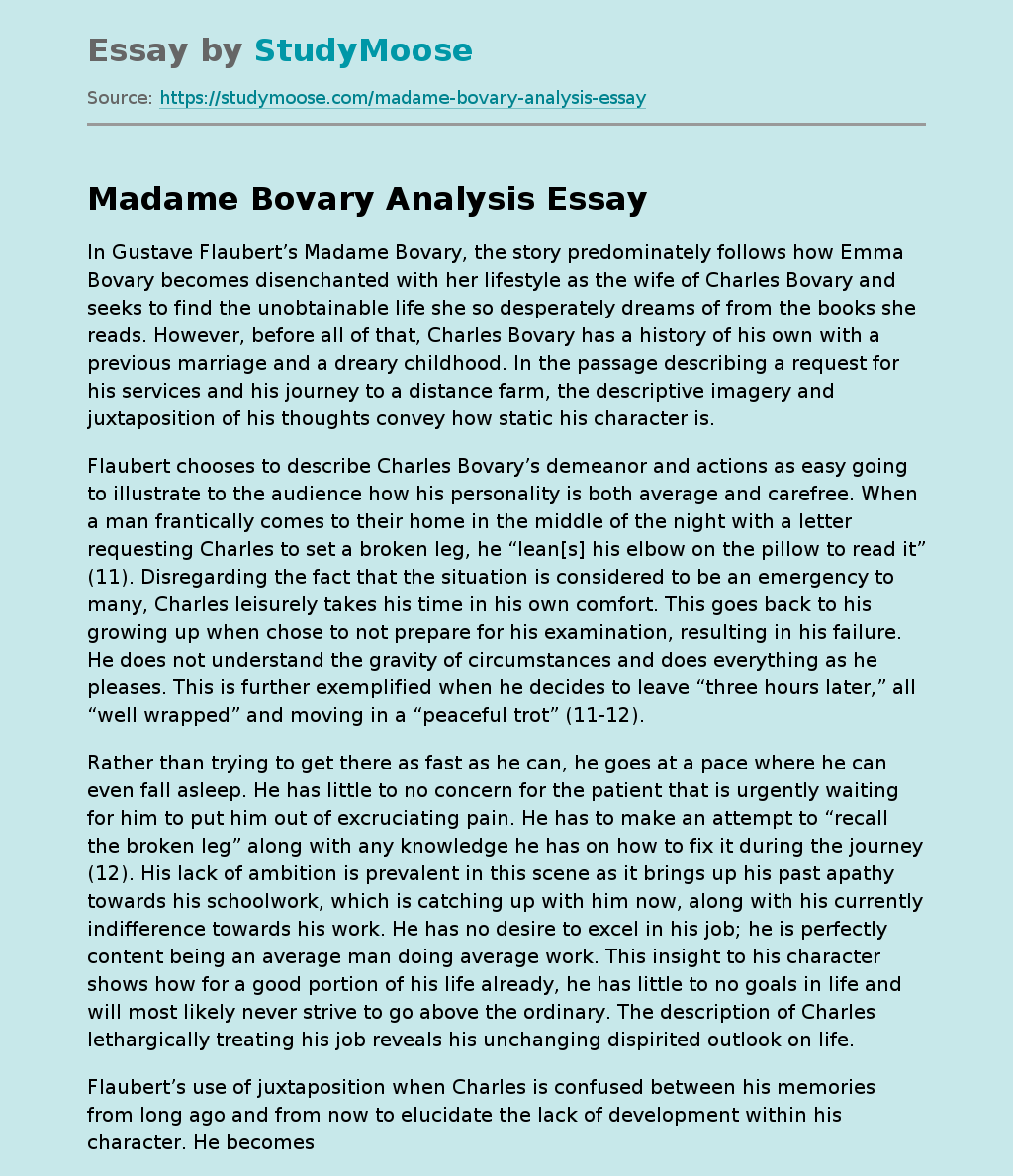