Unemployment is defined as “individuals who are actively seeking for a job but cannot find one.” The rate of unemployment however is the number of employed individuals expressed as a proportion of the labour force. During the recent 2010 recession, the United States (US) faced an incredibly large unemployment rate. Despite the fact that America has mostly recovered from the recession, some sectors of the American economy have not yet left the ‘recessionary zone.’ In this article, the dilemma of American teenagers and blacks discrimination is discussed.

The statistics given from the article demonstrate a decrease in the rate of unemployment within the American economy. This is illustrated in the graph below as we can see the aggregate supply of labour closing the gap between itself (in blue) and the aggregate demand in order to achieve market equilibrium.

Statistically, this improvement can be seen by the drop in unemployment figures from 9.4% in December 2009 to 9.4% one year later in December 2010. Analysing the situation, numerous factors could have resulted in this dip.

Primarily, gender discrepancy should be taken into respect. Females dominated industries have increased in size such as education and healthcare industries. Supporting my analysis, the rate of unemployment for women minimally fell by 0.1% unlike their male counterparts whom suffered greater losses. Males as a result saw a greater decrease in their unemployment percentages, falling by 0.8% in comparison to the female’s 0.1% probably due to discriminating reasons, academic motives or other social aspects.

Another yet the most principle core dispute raised in the article is the fact that blacks and teenagers are being discriminated suffering from the highest rates of unemployment.

Teens topped a high unemployment percentage of 25.4% whilst blacks a little lower tallied at 15.8%. Logically this makes sense for teenagers (assuming they are in the job searching range of 16 to 19 years old), in this age group most teenagers have had little professional experience as emphasis is placed on completing their high school diploma, meaning that the labour force is fundamentally less productive as these teenagers would have no or relatively no real previous real work experience in comparison to an elder person making them less appealing to employers. A growing number of teenagers choose to work as servers/waiters as a consequence of preference and taste for the job yet more importantly, due to their lack in qualifications to work in offices and large firms.

As laws enforcing compulsory education up to a certain age become stricter and a higher number of adolescent individuals choosing to complete their studies exists, these individuals are not counted in the ‘pool of unemployment’ as they do not wish to have a job at that moment in time. By estimating, blacks who seem to comprise largely of adults seem however to be facing discriminatory reasons resulting in their rather high unemployment rate.

America could modify a few of its structural policies in order to circumvent such dramatic results if a recession were to occur again. Firstly, better and wider training programmes in all academic fields should be offered to students at schools. If the education became more flexible, offering courses in a wider range of subjects, the creation of a possibly more productive workforce is probable and more importantly, having acquired many skills and talents, these teenagers would be capable of finding new jobs in case of a structural change in the economy that demands different skills.

Another policy could be to fundamentally ensure that every teenager is granted some type of access to good education/training programme. Lastly, as teenagers in school are not recorded as part of the unemployment rate, the rate of unemployment could be reduced if the government were to provide some type of incentive for teenagers to go back to/attend school. Not only would this reduce unemployment figures in the short run, it would mean that these same teenagers will be capable to offer society much more as they would have gained professional qualifications

According to Alicia Robb,”Asians are the most educated, so when you have the largest pool of workers, employers are going to pick the most qualified” Robb’s statement explains the situation of the Asian race, having suffered the lowest increase in unemployment yet highest fall un unemployment figures from 8.4% in December 2009 to 7.2% a year later.

Recently, a voluminous amount of Asians have flocked to the United States. Not only do they usually obtain higher qualified or greater work experience but Asian labour has been branded to be relatively cheap lowering a firm’s total costs, increasing profits.

The later generation of these Asians (20 – 30 years old) are thus already qualified enough due to the development in America after 1980s and most of them are employed in good companies and are very well paid now. The young generation of Asians, which are contributed to the teenagers are now concentrating on education in America and most of them would go back to their countries after graduating. 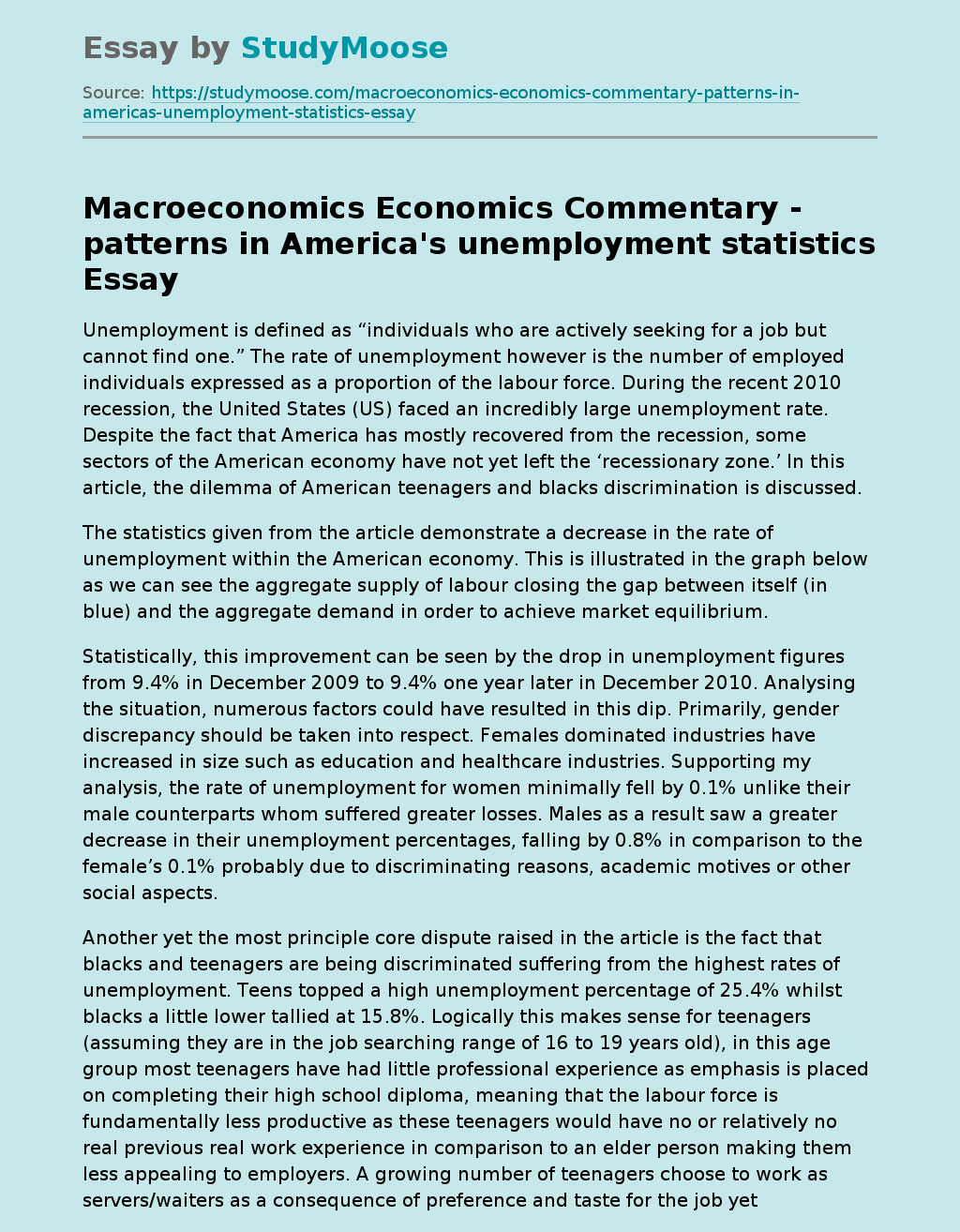