Age is the main demographic factor affecting the market for video game consoles although common misconceptions are that the market is mainly comprised of teenagers. Recent Studies shows that the largest market sector of video game console purchases are teenagers or young adults. ESA demographic data shows that America’s average game player’s age is 34 and the average age of game purchasers is 40 (see article x) Generational factors play a big role in the market sector of gamers who purchase more than one game console, buy the latest version and buy games into adulthood.

Turn in your highest-quality paper
Get a qualified writer to help you with
“ Macro Economic Factors Affecting the Video Game Console ”
Get high-quality paper
NEW! AI matching with writer

In 2010 26% of gamers were over 50. There is a definite generational factor as many of the consumers were in their teens when the mass video gaming culture began and now are in their 40s or 50s and have retained their gamer status, therefore are also ready to adopt new products. Gender is another factor that should be noted. Female gamers are a large portion of the video console market although significantly less than their online gaming counterparts.

ESA research predicts that 40% of video game players are females. Economic Factors: Household income ± studies have shown that video games in the toys and games market are able to gain a significant share of the market the larger the average household incomes are of a given market segment or particular region. For video games to comprise of 15% market share in toys and games of a given country, 60% of the population must earn incomes above US $15,000 (see figure x).

The sale of consumer electronics andnovelty products are influencedby macroeconomic factors of a country. If there are recessionary or inflationary pressures, sales are likely to be affected sincechanges in consumers behaviour is determined by the perceived increase or decrease in the level of disposable income. This is, however, likely to have a short term impact and in the long run will have negligible changes on the sales of video game consoles, as business cycles return to a favourable position for higher consumer spending.

Video Game consoles have a price elastic demand (for a portion of the consumer market) and combined with a high substitutability factors creates susceptibility to changes in competitor’s prices or quality hence impacting the size and share of the market for our product. Factors that change the cross price elasticity of our product need to be considered and addressed.

Innovation R&D- Technology, particularly technological innovation is a critical factor in the video game console market, and the leading competitors Microsoft, Sony, Nintendo have significant R&D invested in technology improvements. If our product development lifecycle does not include product improvements that are comparable to the leading competitor’s product, future success will not be guaranteed. Compatibility – Hardware issues include compatibility with existing hardware and the ease and cost of switching to the use of new hardware.

Our product has the benefit of not requiring additional video output devices, i. e. television sets and monitors. Software Development -Technological developments in the software developing industries with which we have partnerships and licencing contracts will affect the attractiveness of our virtual video game console and hence indirectly affect sales generated. Also revenues generated from licencing and subcontracting are dependent on the success of game software publishers; a tactic to reduce risk would be to diversify the scope and use of our product, i. . develop a large partner relation database.

Industry Regulation plays an important role in the success and growth of any technology specific product. It will invariably depend on the industry regulations specified the country code of regulatory law when production and manufacture will be conducted but also within the countries where target market segments reside. Ownership of manufacturing, distribution, and exporting firms also vary in different countries and will need to be considered before launching a worldwide market strategy.

The trade and product specification restrictions on use of certain technology and/or products as well as licencing and exporting costs of the distribution and sale of various product categoriesdiffer between countries/regions and will have a large impact on the competitiveness of the virtual video game console. This can be in the form of trade barriers or indirect barriers through the use of health and safety standards, product labelling and advertising laws and restrictions.

Legal issues in country of sale, aside from aforementioned industry regulations, include trademarks, copyrights, licensing, patent applications, online ownership, and revenue recognition. Piracy and counterfeiting issues will need to be considered. It has become an accepted practice for the console manufacturers to lose money on the hardware and to recover the loss by charging high licensing fees to game publishers and developers.

IPR standards are weakly enforced in many emerging markets with large market potential such as China, Brazil, and Russia. Environmental Factors: Raw Materials ± The Video Game industry uses a lot of plastic resources and requires the use of scarce metals for its hardware. Given the negative public view on large amounts of non-biodegradable waste product, manufacturing processes and the use of valuable raw materials in the virtual video game console need to be carefully considered.

The National Resources Defense Council (NRDC) recently published a study on American energy usage with specific regard to game consoles and found that game consoles consume roughly 16 billion kilowatt hours annually(see figure x). These finding were based on the assumption that half of the consoles are left on or on standby after use. A console that has timed automatic shutdown, as the virtual gaming console does, reduces this energy wastage.

There is a general perception that frequent video gaming has a negative impact on a person health. However this perception may subject to change as research shows contrasting outcomes that there is the view that considers such side-effects to be ‘relatively minor or temporary’ (Griffiths 2002) and that finds playing computer games is comparable to a mild intensity exercise: with normal use, playing may neither improve nor harm physical fitness (Emes 1997)? Cultural Factors: Fashion Trends: Video Game console purchases are often made according to similar purchases made in a consumer’s social reference groups.

Word of mouth and peer reference can play a crucial role in the choice of video game consoles.

the ability to connect to a large number of players online through a portable console has a definite cultural factor as the popular use of online networks determine the success of the addition of these features. Recreational Alternatives- changes in the demand for video game console may be created through a shifting trend in choice of recreational methods. Advances in the market for other toys and games could play an important role. 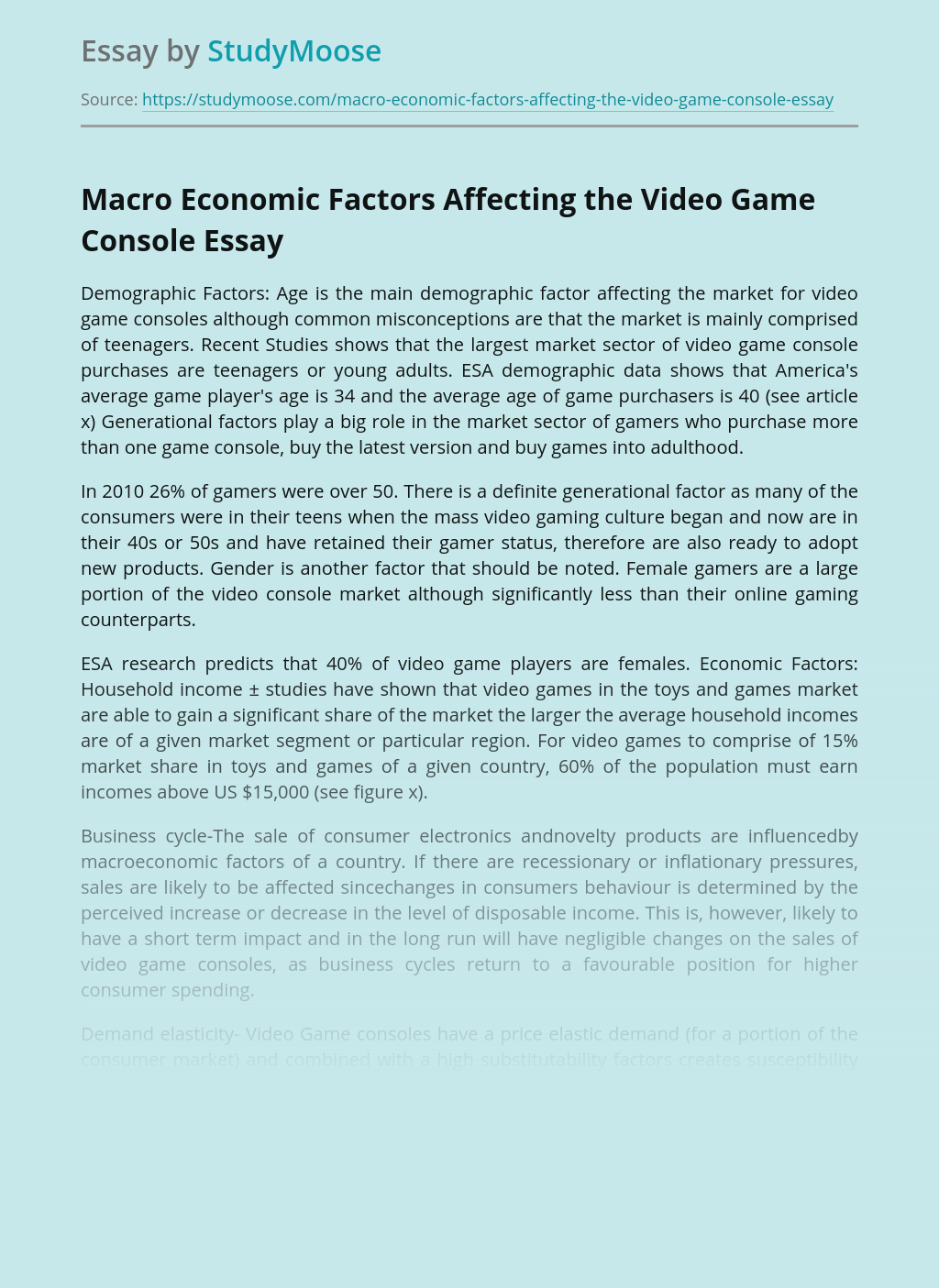 Turn in your highest-quality paper
Get a qualified writer to help you with
“ Macro Economic Factors Affecting the Video Game Console ”
Get high-quality paper
Helping students since 2015
Stay Safe, Stay Original