Machiavelli’s view was that cruelties could be good or bad depending on how they were being used. He stated that well used cruelties are ‘cruelties that are carried out in a single stroke, done out of necessity to protect oneself… [and] are converted into greatest possible benefits for the subjects’. While cruelties that are badly used, are those that are ‘few at the outset’ but ‘grow with the passing of time instead of disappearing’ (Machiavelli, 1998, 32).

Though condemned as immoral, it is undeniable that practising cruelty is a practical and effective way for one to stay securely in power.

Don't use plagiarized sources. Get your custom essay on
“ Is Machiavelli’s realism an accurate account of politics? ”
Get custom paper
NEW! smart matching with writer

In this context I can think of a recent incident that cruelty can be considered well used, that is the internationally well-known event Tiananmen Incident. Since the Fifteenth of April 1989 students had been holding demonstrations at the Tiananmen Square. The situation escalated to a point that the government might be overthrown if it was allowed to continue. Martial law was declared.

After six weeks of chaos, on Fourth of June 1989, the People Liberation Army finally crack down on the prolong protest which was spreading to other parts of China.

Once the protestors were dispersed, the army immediately cease committing any more acts violence. With order restored China progress rapidly. Now the once backward country was viewed by most as an emerging superpower that might one day challenge America’s dominance. Although the Chinese government, out of necessity to protect itself, unleashed cruelties on its people, it ensured that they were done in a single stroke and ‘converted [them] into greatest possible benefits for the subjects’ (Machiavelli, 1998, 32). Hence presenting a good case of cruelties could be good if well used.

Conversely how the Israelis suppressed the Palestinians uprisings was a classic case of badly used cruelties. Since the start of Second Intifada, cruelties inflicted on the Palestinians had ‘grown with the passing of time instead of disappearing’ (Machiavelli, 1998, 32). Whenever the Palestinians carried out a suicide attack, the Israelis would retaliate with target assassinations using helicopter attacks (which were deemed cowardly), imposing blockades on the Palestinian territories and sending its army to demolish the home of the attacker.

Although much of Machiavelli’s writings were not discussed but just by going through his views on military, the appearance of leader and the usage cruelties we can see that his realism did give an largely accurate account of modern world politics. His methods might be deplorable; but politics has always been full of intrigues anyway. Moreover his methods were common during his time. Hence once moral standards are placed aside; objective analysis and comparisons of his writings with events around world would show you that his realism is indeed an accurate account of politics.

Is Machiavelli's realism an accurate account of politics?. (2020, Jun 02). Retrieved from https://studymoose.com/machiavellis-realism-accurate-account-politics-11781-new-essay 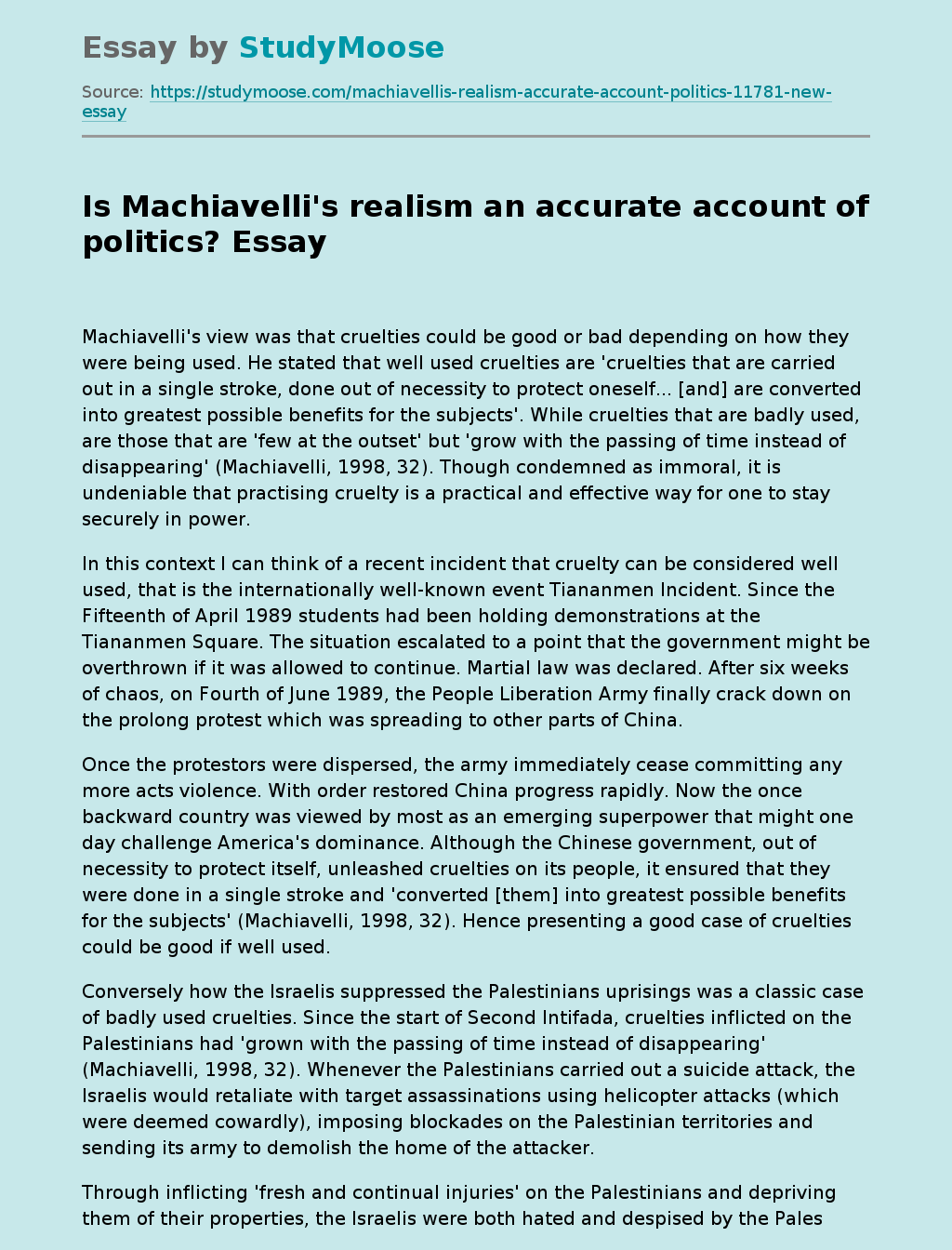