Writing one of the most acclaimed books of all time must not have been easy; not one bit. Stating that, the fact that Frederick Douglas, among many others, is capable of criticizing Machiavelli and his genius work on The Prince, really infuriates me. Unconsciously, Niccolo Machiavelli became one of the first and most important philosophical leaders of all time after writing The Prince. Although The Prince is considered one of the greatest pieces of political theory in history, it is not always looked upon favorably, and a clear example of this comes from Frederick the Great.

Don't use plagiarized sources. Get your custom essay on
“ Machiavelli: Hero or Villain? ”
Get custom paper
NEW! smart matching with writer

In 1739, Frederick the Great wrote a severe critique of The Prince entitled Refutation of The Prince of Machiavelli in which he expressed that he thought “Machiavelli corrupted politics, and in doing so hoped to destroy the very percepts of sound morality”.

This is an idea with which I don’t particularly side with. In his critique of The Prince, Frederick the Great talks about how this book is one of the most dangerous pieces of literature that has ever been released to the world.

He describes how if this book were to fall into the hands of young, naive princes whose judgment hasn’t fully developed, their perspectives would be corrupted. Honestly, Frederick has this all wrong. The Prince is meant to be looked at as a type of “handbook” or “guide” which Machiavelli created in order for the current prince to have a successful career as commander in chief. He is hoping to help and facilitate the journey the person who is the acting prince, which in that case was de Medici.

It is clear that Frederick the Great thought that Machiavelli’s intentions in writing the story were to corrupt the mind of young princes, but the wise words on the guide had only one unique function; to ease the roll of the being a prince.

This is why Frederick is certainly “wide of the mark” concerning his opinions. In the midst of Frederick’s severe evaluation of The Prince, he mentions a quote made by Machiavelli which appears in the book. The citation went as following, “Since all men are villainous and will not keep their word with you, there is no obligation for you to keep faith with them.” Frederick the Great then goes on to critiquing Machiavelli by saying that he is implying that the prince should act without mercy and be a cruel ruler of his people. He then goes on to complain about how Machiavelli is of evil influence and that he is out to corrupt politics and in doing so “hoped to destroy the very percepts of sound morality”. Honestly, this quote mad by Niccolo is one which needs to be looked at figuratively. Machiavelli is trying to convince the prince to become a powerful, significant figure with his people, who doesn’t let himself get pushed over.

He’s is implying that the prince be one who is firm in his decisions and but is also feared by his people. He explains why this should be; reasoning that being feared is the equivalent of being respected. Machiavelli strongly recommended a leader with no remorse meaning the certain respect from the people he ruled over. Near the end of the critique, Frederick the Great points out how Machiavelli thought that the, “people would be more impressed by the show of devotion, than revolted by the bad treatment they have received from the prince”. There is no room for doubt concerning this matter. Machiavelli is very clear concerning his perspective. A prince who wishes to be respected and looked well upon must be a demanding one who shows his commitment and dedication to his duties.

Frederick is completely wrong in believing that Machiavelli wishes the prince to treat his people incorrectly. All that Machiavelli is implying is that the prince must not be one who doesn’t show his presence as a leader. He must be demanding and at times harsh. This will make him seem as a leader who doesn’t care about his people, but in reality, he is just doing what is best for them. Machiavelli also previously stated that it is better for a prince to be feared than loved because of the amount of respect received when he is feared. This does not mean that the prince be a diabolical one, it means he must be devoted to all he sets mind to without caring for anything else but his people.

All in all, the prince must not be a push over in the eyes of the public; and this is all that Machiavelli meant to say. Although The Prince is considered one of the greatest pieces of political theory in history, naturally, it is not always looked upon favorably. It is clear that not all will see eye to eye concerning this piece of literature, as is the case with Frederick the Great. This being said, this book is not a list of what princes actually do, moreover, it is a guide to help a man become a prince looked up to by the people he governs over. This is clearly what Machiavelli wanted to get through, and it is how Machiavelli and his work on The Prince should be remembered for many years to come. 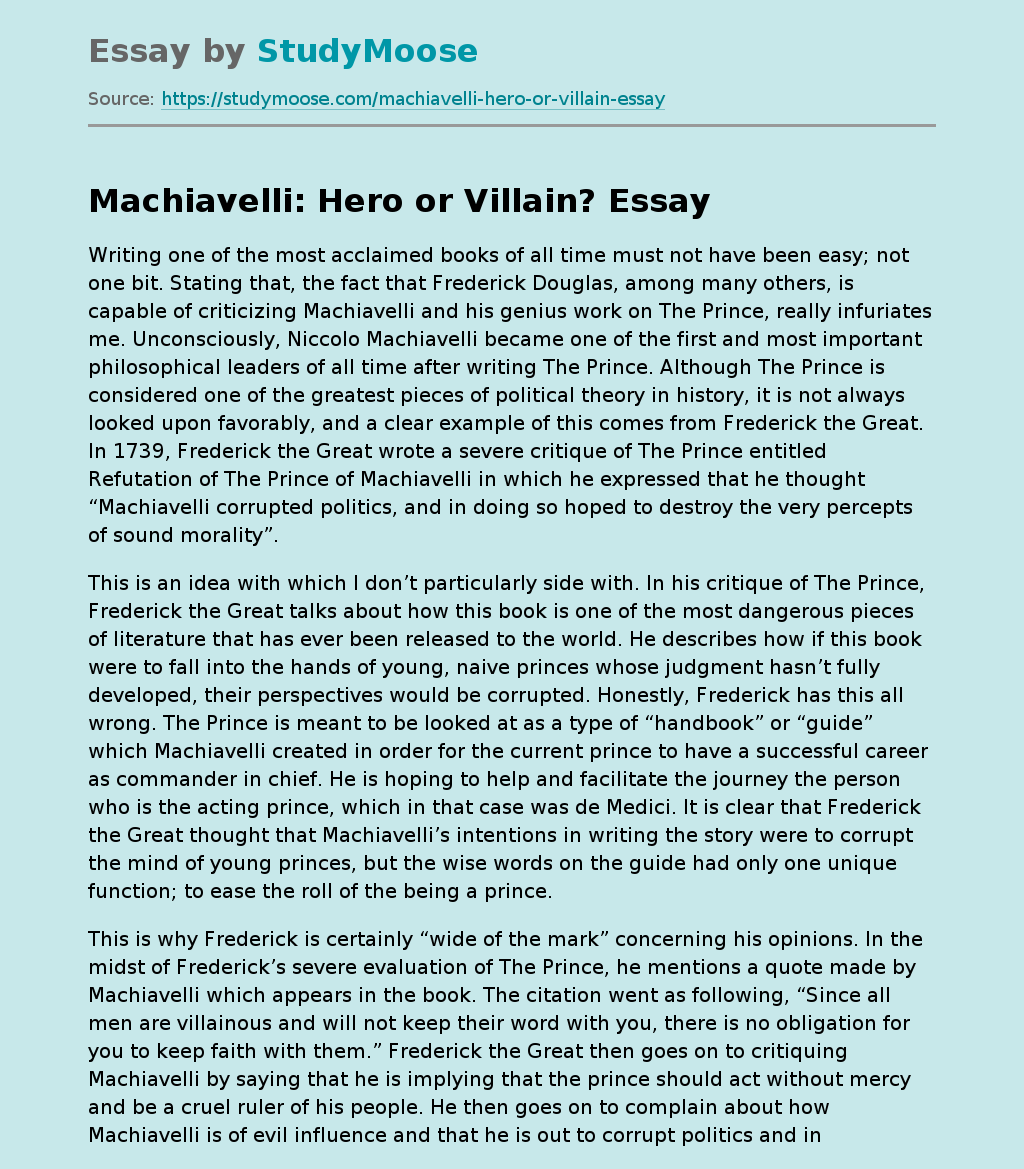