Macbeth Where Events Are Shaped by Ambition and Madness

Of the many William Shakespeare’s famous playwright, Macbeth is one that challenges characters sanity with their ambition for power. Ambition is a theme that is early established in the play where the desire for power and status consumes Macbeth upon hearing the witches’ prophecy. Lady Macbeth, too, desires for power alongside her husband. However, her wrongdoing overcomes her with fear and guilt, which strips her away from her sanity. This also destroys the close relationship that both Lady Macbeth and Macbeth had as their lives are dictated by fear.

Don't use plagiarized sources. Get your custom essay on
“ Macbeth Where Events Are Shaped by Ambition and Madness ”
Get custom paper
NEW! smart matching with writer

Therefore, the events in this play are shaped by the characters whose ambition leads them to lose their morality, and later to be imprisoned in their own madness.

Macbeth is an ambitious man by nature, and was known to be “valiant” and “brave”, however, he is later referred to as a “tyrant” as his crave for power overcomes his sense of morality. Macbeth’s ambition is apparent when he hears the witches’ prophecy, “all hail Macbeth, thou shalt be king hereafter”, to which he later commands “stay you imperfect speakers, tell me more”.

This change in Macbeth’s personality sparks the first signs of ambition he has to become king, and Banquo notices this, quoting “Look, how our partner’s rapt.” This in effect can be said to be the catalyst to Macbeth murdering Duncan for his title of King of Scotland. Because of this, Macbeth lives in constant fear of being overthrown, and his madness to hold power over everyone else is illustrated through the spying of every lord.

“There’s not one but in his house, I keep a servant fee’d.” Consequently, Lady Macbeth also suffers her wrongdoings, and in her madness, she leads herself to her own tragedy.

Lady Macbeth can be said to be even more ambitious than her husband in the beginning, but as the guilt of her actions overcomes her, she takes her own life in defeat. In the first few scenes of introduction to Lady Macbeth, she can be seen to long for status and wills for her emotions to be unnerved for what crime she is to commit. “Come, you spirits that tend on mortal thoughts, unsex me here, and fill me from the crown to the toe top-full of direst cruelty!” This desperation in Lady Macbeth goes to show the immense greed she has for power and can also be seen when she advices Macbeth, “To beguile the time, look like the time. Bear welcome in your eye, your hand, your tongue. Look like th’ innocent flower, but be the serpent under’t.” Although Lady Macbeth acts so spitefully, her conscience still prevails in that she is unable to sleep at night but relives the nightmare the murder. “Here’s the smell of blood still. All the perfumes of Arabia will not sweeten this little hand.” The fear that has consumed Lady Macbeth influenced the event in which she takes her own life.

Ambition and madness enclosed on both Macbeth and Lady Macbeth is the cause for their drifting relationship, to the point where they are incapable of showing emotion towards each other. On the night of the murder, madness seeps into Lady Macbeth as she imagines sounds of the night. “I heard the owl scream and the crickets cry.” Macbeth, on the other hand imagines voices, “One cried “God bless us!” and “Amen” the other, as they had seen me with these hangman’s hands”, marking one of the many occasions in which the killing has affected his and his wife’s mental state. In the progression of the play, Macbeth quotes ‘Direness, familiar to my slaughterous thoughts cannot once start me” implying that he has feared too much to fear anything at all.

This lack of emotion is also seen when he discovers about Lady Macbeth’s death, responding with no sense of care or love towards his wife. “She should have died hereafter; there would have been a time for such a word.” All this contrasts with the relationship Macbeth and Lady Macbeth had at the start where they regarded each other as “My dearest love”. Their relationship had been bound to suffer as their ambition was too great for their ability to cope with guilt and fear, shaping many unfortunate events in the play.

Macbeth Where Events Are Shaped by Ambition and Madness. (2017, Feb 02). Retrieved from https://studymoose.com/macbeth-where-events-are-shaped-by-ambition-and-madness-essay 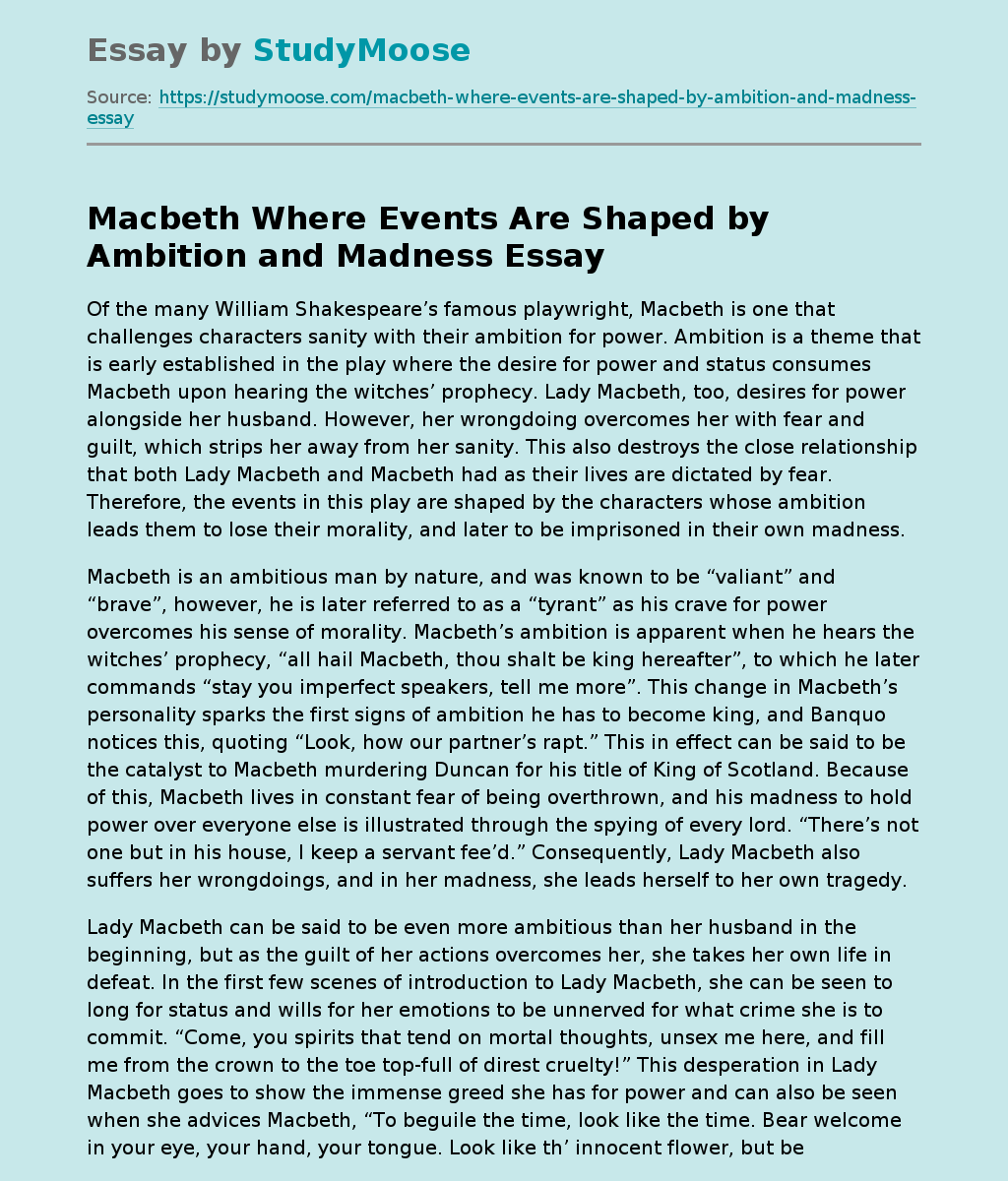