The longest journey, is the journey of self discovery.

Don't use plagiarized sources. Get your custom essay on
“ Macbeth vs. Holden Caulfield ”
Get custom paper
NEW! smart matching with writer

To discover ones self, a person must confront things they would rather not and be truthful to themselves. Both characters, Macbeth from William Shakespeare’s The Tragedy of Macbeth, and Holden from J.D. Salinger’s The Catcher in the Rye, embarked on a inward journey of self discovery.Through being emotionally unstable, having contradicting morals, and discovering who they truly are, it is evident that though two different outcomes, they both had a journey of self discovery.

Unlike Holden, Macbeth was very emotionally stable at the beginning. He was respected, a devoted husband and a loyal subject to his king. Despite the fact he was so stable at the beginning, Macbeth quickly lost control of his emotions when the three witches confronted him with the three prophecies, which ultimately let the emotions of greed and guilt come over him from the immoral actions he committed

In comparison, Holden’s emotional stability was very flaky during the beginning of the novel, but gradually improved during his journey.

Holden was very depressed because of the loneliness and isolation he felt, which was ultimately is own fault. From his journey, he slowly started to gain control of his emotions and accepted the truth of his mental illness. He transformed himself completely, and ultimately gained control of himself by finally reaching out for professional help. Holden went from being very angry and upset to accepting his faults and changing his life around. Holden and Macbeth both had morals, but where Holden’s stayed genuine and true, Macbeth’s fell apart.

At the beginning, Macbeth was repulsed by the thought of killing the King, but by the end, he was murdering everyone his way. It was LM who first triggered Macbeth’s moral down fall, but Macbeth was the one to completely diregard them. Macbeth had control of his morals but ultimately chose to go against them to get what he wanted, power. His disregard is clear when he made the decision to kill Banquo because he didn’t want to lose his power to Banquo’s descendants and he was starting to become suspicious.

Unlike MB Holden’s morals were challenged multiple times but he over came the obstacles. Yet the driving force behind much of his decision making is a sense of morals that is at times twisted but is always present. One of Holden’s main concerns is the fact that the world around him appears to be losing its morality and the people are all phony, all incapable of following the moral code that Holden insists on placing on those around him. He is worried about even the smallest things like the foul language scrawled on the walls at the museum. The title of the book reflects his desire to be the catcher in the rye, to prevent children from running over the edge of the field and hurting themselves. So despite his inability to recognize morality in others, like Mr. Antolini, somewhere inside Holden there is a deep sense of morals and a strong desire not just to follow them but to have others follow them as well.

Macbeth and Holden both embarked on a journey of self discovery, where they discovered who they truly were. Macbeth discovered the horror of the crimes he comitted and that the power he was once thought was everything, actually meant nothing.Macbeth started off with an abundance of friends, however, he ended with a whole bunch of enemies. Though he only came to realize it at the end of the play, his actions destroyed his respect and honour and led to his death bed. Before he was killed, Macbeth had reflected on his life, and he started to understand the full extent of what he did and the consequences his actions were going to have.Unlike Macbeth, Holden’s journey lead to a positive ending where he accepted himself and started on the road to recovery.

Throughout the entire novel, it was evident that Holden was very depressed. He had no hope for his future, as he expressed to his history teaher Mr. Spencer, and he believed he was headed no where in life. Holden was kicked out of numerous schools and it was not until after his New York adventure that he went on an unitentional road of self-discovery. Holden was clearly in pain over his brothers death, pain that he was yet to deal with. As the book progressed, Holden gradually matured into a strong and indepent individual. He developed stronger relationships with Phoebe, his brother DB and a few others like Jane, and he finally allowed himself to accept his faults and accept the reality that no one is perfect. His breakdown turned into a major breakthrough, which changed his life in a positive way. Macbeth and Holden both discovered who they truly were, one greedy and power seeking, and the other a strong and indepent person who had to deal with a great loss.

Both The Tradgey of Macbeth and The Catcher in the Rye tell a story of great self discovery. Macbeth from good to evil, and Holden bad to good. Through their emoitional stability, contradicting their moral values, and discovering who they truly are, shows the way Holden and Macbeth changed through both the novels. 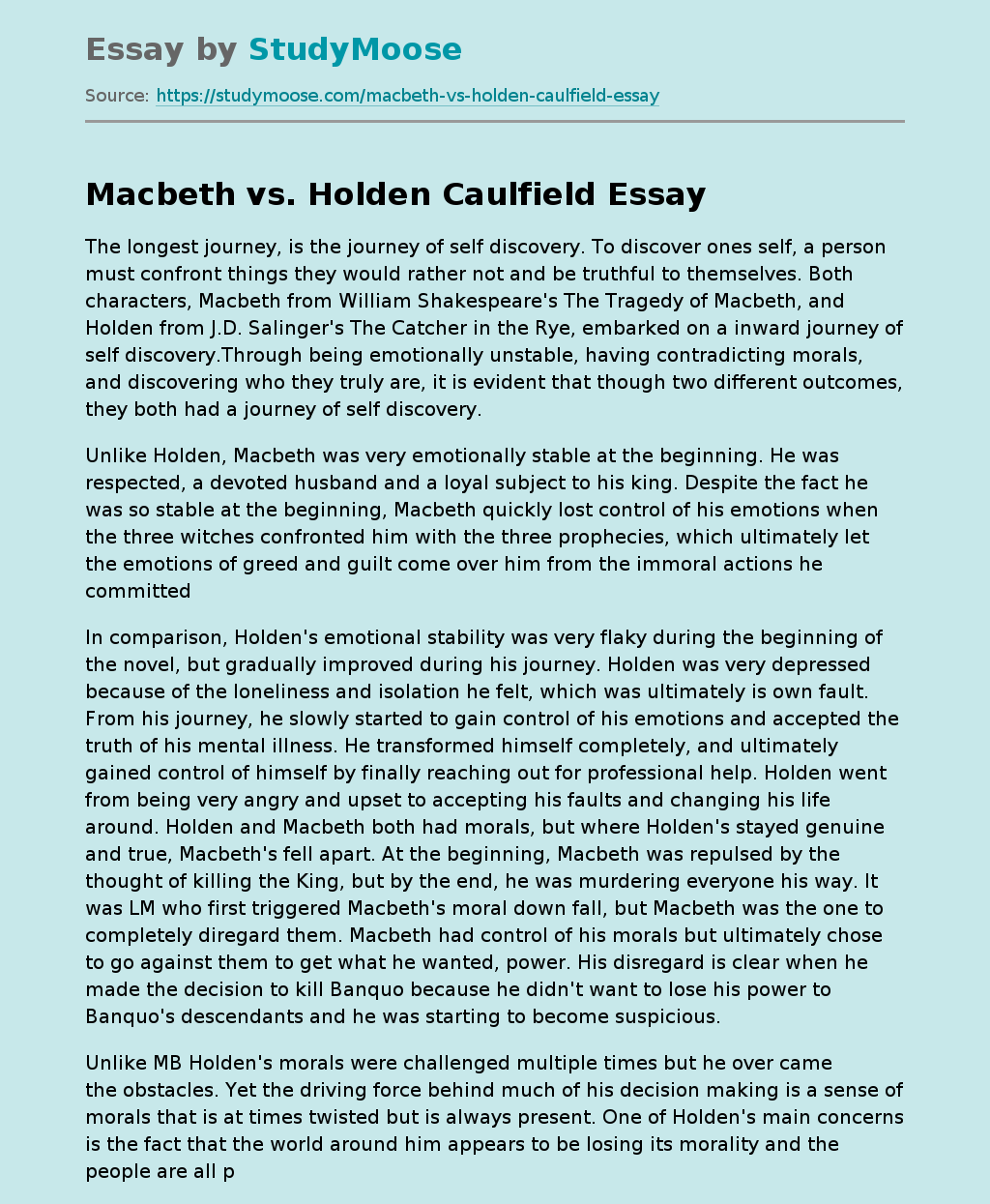