Macbeth is both a victim and villain. He was victimized by his wife and the three witches. Macbeth chooses to follow the path of the witches. Macbeth is either a victim or a villain, but I think he is both. Macbeth is a villain, because he has the power to choose if he wants to listen to the witches encouraging him, but something inside Macbeth makes him want to listen. He is a villain, because when the three sisters are making their last prediction ‘all hail Macbeth, that shalt be king hereafter’ he started thinking of the possibilities of becoming king.

Don't use plagiarized sources. Get your custom essay on
“ Macbeth: Villian or Victim? ”
Get custom paper
NEW! smart matching with writer

He is a villain, because he chooses to follow the path of the witches and decided to kill people even after Lady Macbeth told him not to. Macbeth is a victim, because he was tricked by the witches into murdering many kings such as Duncan. He was pressured into killing the king by his wife. At first Macbeth didn’t want to kill King Duncan, but then Lady Macbeth influenced him into doing it.

Lady Macbeth victimizes Macbeth and intentionality said that Macbeth wasn’t a man to get him to kill the king. The predictions of the witches made Macbeth turn evil.

Macbeth declares that he no longer intends to kill Duncan. Lady Macbeth, outraged, calls him a coward and questions his manhood: ‘When you durst do it, ‘ she says, ‘then you were a man’ (1.7.49). ‘ Have plucked my nipple from his boneless gums, and dashed the brains out, had I so sworn as you have done to this.’ She says this to make him angry and feel ashamed of lacking masculinity, so in order to prove to himself and to Lady Macbeth that he is manly, he becomes determined and does the deed.

Lady Macbeth is well aware of the discrepancy between their respective resolves and understands that she will have to manipulate her husband into acting on the witches’ prophecy. Her soliloquy in Act 1, scene 5, begins the play’s exploration of gender roles, particularly of the value and nature of masculinity. In the soliloquy, she spurns her feminine characteristics, crying out ‘unsex me here’ and wishing that the milk in her breasts would be exchanged for ‘gall’ so that she could murder Duncan herself. These remarks manifest Lady Macbeth’s belief that manhood is defined by murder. When, in Act 1, scene 7, her husband is hesitant to murder Duncan, she goads him by questioning his manhood and by implicitly comparing his willingness to carry through on his intention of killing Duncan with his ability to carry out a sexual act (1.7.3841). Throughout the play, whenever Macbeth shows signs of faltering, Lady Macbeth implies that he is less than a man. Lady Macbeth spurs Macbeth to treason, by disregarding his rational, moral arguments and challenging his manhood. Basically, she dares him to commit the murder, using words that taunt rather than persuade. Under her spell, all of Macbeth’s objections seem to evaporate and he is left only with a weak ‘If we should fail?’ to set against her passionate challenge (1.7.59).

Lady Macbeth urges Macbeth to hurry home so she can persuade him to do so, since fate seems to want him to become king. ‘Glamis thou art, and Cawdor; and shalt be What thou art promised. Yet do I fear thy nature; It is to full o’ th’ milk of human kindness To catch the nearest way: thou wouldst be great, Art not without ambition, but without The illness should attend it. What thou wouldst highly That wouldst thou holily; wouldst not play false, And yet wouldst wrongly win. Thou’ld’st have, great Glamis, That which cries ‘Thus thou must do, ‘ if thou have it, And that which rather thou dost fear to do, Than wishes should be undone. Hie thee hither, That I may pour my spirits in thine ear And chastise with the valor of my tongue All that impedes thee from the golden round, Which fate and metaphysical aid doth seem To have thee crowned withal.

After reading her husband’s letter bringing news of his new title and the Witches’ prophecy, this was Lady Macbeth’s soliloquy (1-5). She’s overjoyed that her husband will become king, but worried that Macbeth will prove to be too weak to murder Duncan himself. She urges Macbeth to hurry home so she can persuade him to do so, since fate seems to want him to become king. Macbeth was also under the influence of the three witches; because they appeared so inhuman and magical, ‘ Speak if you can what are you?’ The predictions of the witches made Macbeth turn evil. The witches first prediction, ‘ All hail Macbeth, hail to thee Thane of Glamis’., and the second prediction ‘ All hail Macbeth, hail to thee Thane of Cawdor, ‘ both came true, so Macbeth thought why wouldn’t the third ‘ All hail Macbeth, that shalt be king hereafter!’ This made Macbeth think about being king and having all this power.

In order to have all this power he now has to kill all these people. Did not the witches speak words of wisdom before with the other two predictions? Macbeth was a victim to the witches throughout the play, thinking about their encounter. If the witches and Macbeth hadn’t met, Macbeth wouldn’t have killed Duncan, Banquo and not would he have committed all the bad deeds he did.

Macbeth became a villain by choice, because he decided to kill people even after Lady Macbeth told him not to. I believe Macbeth is a villain because he killed people even when his wife told him not to. ‘Out, damned spot! Out, I say! One; two: why, it’s time to do t. Hell is murky! Fie, my Lord, fie! A soldier, and afraid? What need we fear who knows it, when none can call our power to account? Yet who would have thought the old man to have had so much blood in him?’ (5-1-30-35). I believe that Macbeth became a villain by choice because of this quote, ‘Will it not be received, When we have marked with blood those sleepy two Of his own chamber and used their very daggers, That they have done ’t? (1.7.8588). He asks who would possibly fail to believe them when they’ve used the daggers belonging to Duncan’s chamberlains to kill the king as well as smeared the chamberlains with Duncan’s blood. 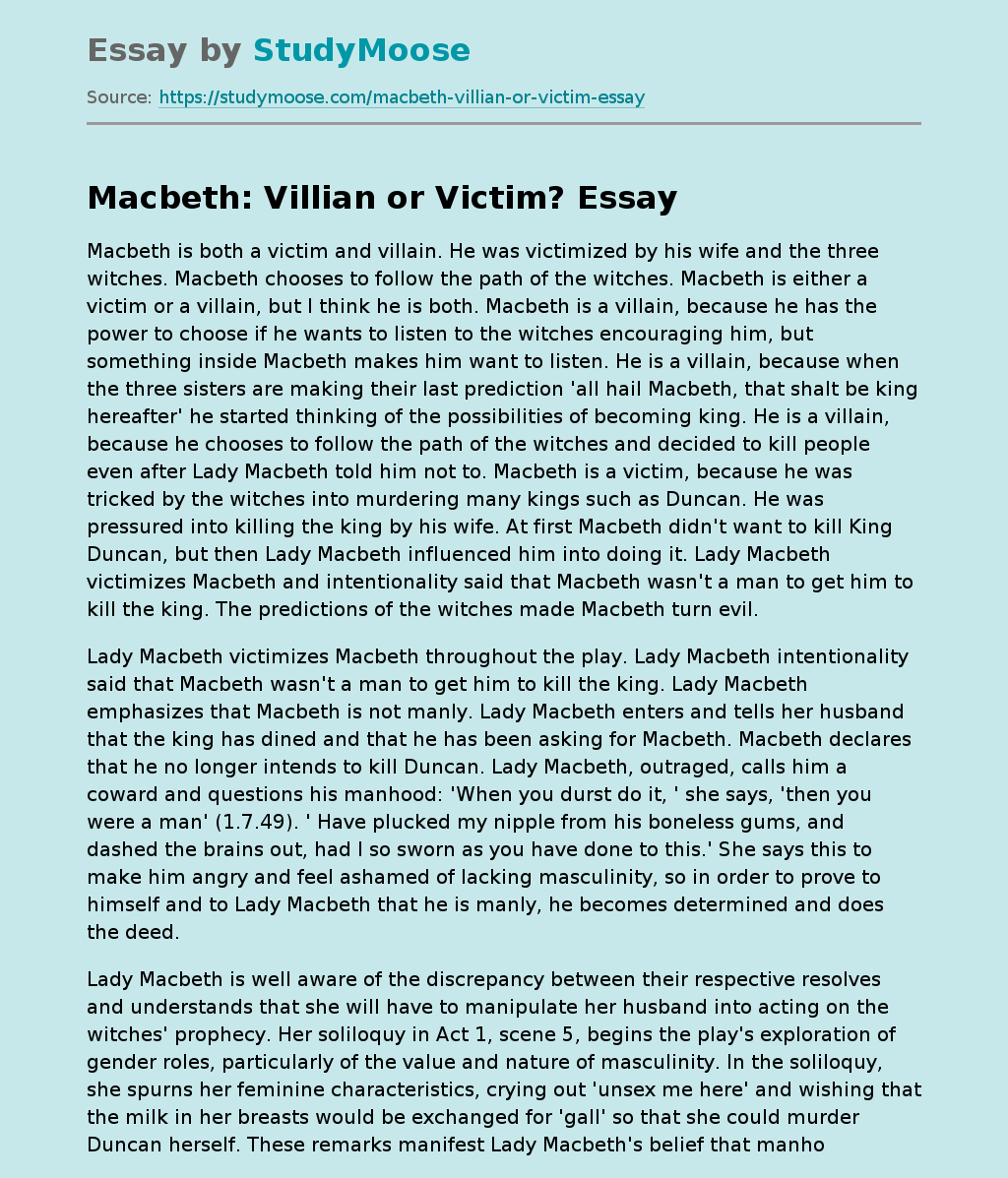