Don't use plagiarized sources. Get your custom essay on
“ Macbeth Outline ”
Get custom paper
NEW! smart matching with writer

decides against or at least wavers…. ”I have no spur To prick the sides of my intent,”… nter Lady Macbeth, Macbeth decides against regicide, Lady Macbeth argues against him, questions his love, honour, manhood, Macbeth reluctantly commits to regicide. ACT 2, Scene 1 – Castle courtyard, Banquo and son Fleance, Banquo hands Fleance his sword then as Macbeth enters requests it back, Macbeth and Banquo discuss their meet with the witches. Banquo states that he does not wish to aid Macbeth in becoming King. He does agree to discuss the matter further. Banquo confirms his allegiance to King but is inwardly struggling. Banquo and Fleance exit. Macbeth bids servant to tell mistress to strike bell when drink is ready (murder signal).

Servant exits, Macbeth 2nd soliloquy, dagger apparition/phantasm, horrified by thoughts of coming ordeal but is not dissuaded, bell rings, goes to kill Duncan and now less sure of Duncan’s virtue … ”Duncan; for it is a knell / That summons thee to heaven or to hell. ” ACT 2, Scene 2 – Lady Macbeth alone, Owl shrieks, recounts the way she has drugged the Kings guards. Macbeth enters … ”I have done the deed… ”. He has guard’s daggers with him. Raving about not being able to say “Amen”. Lady Macbeth takes charge, dominant, takes daggers back to room and bloodies guards.

ACT 3, Scene 1 – Room in palace, Banquo contemplates events, suspicious of Macbeth foul play. Enter King Macbeth and Lady Macbeth, Lennox, Ross etc, Macbeth mentions Duncan’s sons “… not confessing / Their cruel parricide… ”. Banquo tells Macbeth he must take a trip and return that evening. Exit Banquo. Macbeth tells all to rest. Exit all. Macbeth calls in two Murderers and persuades them to assassinate Banquo on his return. ACT 3, Scene 2 – Room in Palace. Lady Macbeth and servant. She acknowledges that they have not gained happiness. Macbeth enters.

She thinks he is brooding on the past evil acts but he is planning new ones. She can no longer read him. He no longer involves her in his plans … ”… Be innocent of the knowledge, dearest chuck / Till thou applaud the deed. ” she has lost dominance. ACT 3, Scene 3 – Road to Palace, Murderers joined by 3rd murderer (Macbeth’s paranoia/distrust), enter Banquo and Fleance, Banquo murdered but Fleance escapes (Macbeth’s plan to defy the witches’ prophecy fails). ACT 3, Scene 4 – Palace Banquet Hall, Macbeth, Lady Macbeth, Ross, Lennox, Lords etc. Welcome to guests.

Hecate annoyed with Witches for interference ? Maybe? Hecate informs witches of a plan to use illusions to fool Macbeth in to a false sense of security that will be his downfall. ACT 3, Scene 6 – Room in Palace. Lennox and a Lord. Discussion political situation, Lennox suspicious of Macbeth, scorns idea of Malcolm and Donalbain killing their father the king, refers to Macbeth as a tyrant. Also discuss Macduff’s lack of attendance at the feast and his disgrace and the fact he has gone to Malcolm who has sanctuary at the English court. Lennox not loyal to Macbeth, impending rebellion. Discontinuity as Macbeth knows of Macduff’s rebellious actions but later learns again from witches in Act 4? ACT 4, Scene 1 – A Cavern, cauldron boiling. Witches brewing, Hecate present, encouraging. Enter Macbeth, requests prediction from witches’ “masters”. Three apparitions in succession each with prophesies (equivocal prophesies) Apparition 1 – Armed Head – Beware Macduff .. ”.. beware Macduff; / Beware the Thane of Fife. Dismiss me. Enough. ” Apparition 2 – A Bloody Child – “… none of woman born / Shall harm Macbeth. ”. reassured, still resolves to kill Macduff. Apparition 3 – Crowned Child with tree in hand – “…

Macbeth shall never vanquish’d be until / Great Birnam Wood to high Dunsinane Hill / Shall came against him. ” , reassured further .. ”Sweet bodements! ”. Witches urge Macbeth to .. ”Seek to know no more. ”. However he presses for more and is shown a further phantasm of Eight Kings and Banquo’s ghost. Macbeth distressed. Witches gloat and tease then vanish. Enter Lennox, news … ”Macduff is fled to England. ” ? Discontinuity as Macduff’s rebellious actions are described in Act 3? ACT 4, Scene 2 – Fife, Macduff’s Castle – Lady Macduff, her son, Ross. Lady Macduff distressed that Macduff has gone to England, distressed. 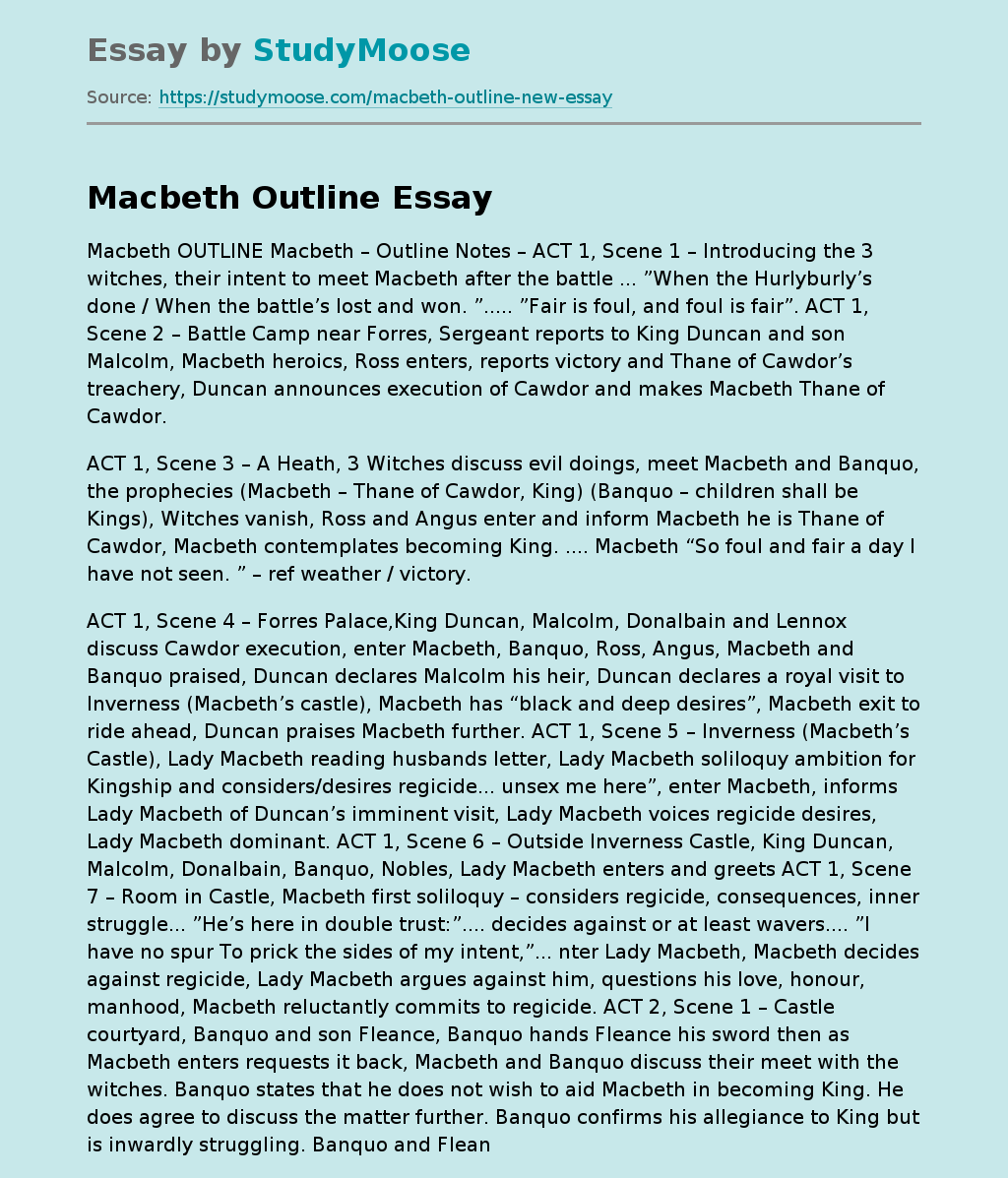