The notorious Shakespearean play Macbeth illustrates a natural evil and greed for power present in the human race. Even in modern times, society relates to Macbeth as people are consistently striving for a higher rank and power. Sometimes, people are even prepared to get into difficult situations to achieve their goals, and this gives rise to conflicts. There are three main types of conflict present in the Macbeth play: man vs man, man vs nature, and man vs self. The most prominent form of conflict in Macbeth is man vs man.

Throughout most scenes, there are several conflicts between multiple characters. After Macbeth takes the throne, there are many people who are suspicious of him and want to do him harm. In response to these conflicts, Macbeth plots murders to kill anyone who gets in his way or threatens his power.

Macbeth plans the murder of Macduff’s family purely because the Weird Sisters told him “Beware, Macduff!” (Shakespeare IV, i, 81). Macbeth’s logic in this plan is difficult to understand, but possibly by harming Macduff’s family, Macduff will be harmed through pain and despair. Macbeth also kills Banquo, who used to be a very good friend, just because he was worried that he might suspect something. “Safe in a ditch he bides, / With twenty trenches gashes on his head, / The least a death to nature” (Shakespeare III, iv, 28-30).

The evil acts Macbeth commits causes several of the characters to become anxious and gain suspicion of Macbeth. Apart from struggles with other people, Macbeth also has a hard time figuring out what he wants to do with his multiple situations. The man vs self conflict is most notably seen with Macbeth. He is easily influenced by his wife Lady Macbeth, and it seems as thought his character transforms and becomes more evil as the murders continue. Macbeth is very frustrated on what to do, as he discusses; “First, as I am his kinsmen and his subject / Strong both against the deed; then, as his host, / Who should against his murder shut the door, / Not bear the knife myself” (Shakespeare I, vii, 13-16). Macbeth is confused as he is arguing with himself on what he should do. He states reasons not to kill Duncan, because Macbeth is his noble kinsmen and the act would bring dishonor.

However, he also states reason why he should kill him, because Macbeth will then become king and fulfill the witches’ fortune. Lady Macbeth, who appears in the beginning as the driving force for the murder of King Duncan, also develops internal conflict. At first, Lady Macbeth seems to be a woman of extreme confidence and will. But, as situations become more and more unstable in the play, guilt develops inside her. For instance, she exclaims; “Wash your hands. Put on your nightgown. / Look not so pale. I tell you again, Banquo’s / Burried; he cannot come out on ‘s grave” (Shakespeare V, ii, 65-67). Lady Macbeth sleepwalks and frets about her evil wrongdoings because she is extremely guilty of her influence on Macbeth to commit the murder.

Lady Macbeth reacts emotionally and dwells on her actions as guilt eats at her soul. The final conflict seen in Macbeth is man vs nature. This conflict is not as well shown as the others but is still present. For example, when Macbeth commits his first unjustifiable murder of King Duncan, the land rebels. Huge storms arise, the grey clouds come out, and the animals even start eating each other. Traditionally, kings are directly related to their land and vice versa. When the king dies, the land gets upset and gloomy, as seen with the weather. The well known scandalous Shakespearean play Macbeth demonstrates an innate maliciousness and gluttony for authority existing in our human race. Even in present-day, the population connects with Macbeth as they are consistently working for a better position in society. Every now and then, individuals are even willing to put themselves into odd circumstances to reach their target, and this gives rise to disputes and conflict. Eventually, all is resolved with the death of Macbeth and the rise of Malcolm as King. The overall reason people study conflict is because conflict teaches everyone morals and life lessons. Through difficult and troublesome struggles, humans can learn and adapt to become more honorable and good people. 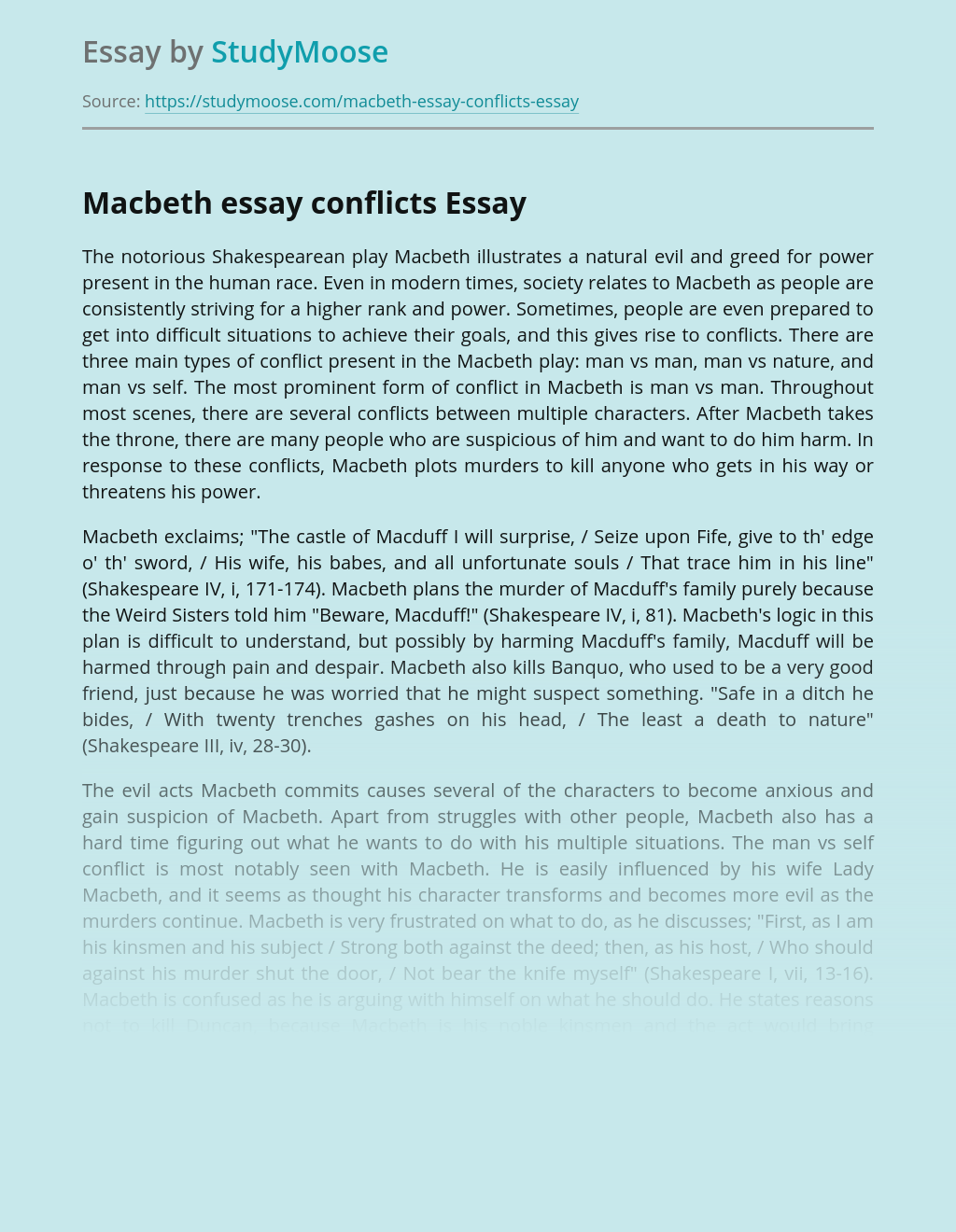