Macbeth as an Object of Criticism

The play I chose to write my critique about is none other than Shakespeare’s shortest and most intense drama known as “Macbeth”. I personally never seen the play Macbeth but heard a lot about it throughout my high school. Shakespeare is a great playwright known for writing the very famous Romeo and Juliet and also for Macbeth. Since I knew how great of a play Romeo and Juliet was, I knew Macbeth was going to be right up there with it.

Don't use plagiarized sources. Get your custom essay on
“ Macbeth as an Object of Criticism ”
Get custom paper
NEW! smart matching with writer

I watched Macbeth on youtube and what a play it was.

I actually enjoyed it and that surprised me. It was a very well-written play where a once-loyal soldier gets a message from some witches that he would be the King of Scotland one day and would rule Scotland. He and his impatient wife could not wait for that and took matters into their own hands and killed their king and took over and blamed the killing on some guards.

When Macbeth saw that what the witch said came true, he went back to them for more information and was told that he should lookout for an enemy “not born of woman” and he believed that was nonsense. Until he was sneak attacked by Malcolm and his army and when he was about to get murdered he was told by Malcolm that Malcolm was born by c-section and that he was not precisely speaking “born of woman”. So it was a very intense play for sure.

The play about Macbeth that I had watched was a more modernized one it had some very grateful theatrical elements.

First off since the play had witches in them, the director had to come up with a way to make the witches disappear from time to time. So the director had to have a gauze curtain that was transparent. And for sound design, there were voiceovers used for the witches so that it could look like they are actually talking. And the lightning was designed really well, where the goal was to inject a natural light setting. Lightning poles were set to create visual effects for the audience. As for costumes go, most of the characters at the start were wearing informs since they were in a war. The King of Scotland was wearing his silky robe which assures of how wealthy he is. Macbeth’s costumes changed since he went from a soldier to a self-appointed King. But mostly costumes were like they were from the old medieval days.

In conclusion, Macbeth was a very well-written play that had everything. And since I watched a modernized version, the director did very well with the theatrical elements to make it very entertaining for the audience to watch. It was a great action play that I would love to watch in a real live play.

Macbeth as an Object of Criticism. (2021, Dec 02). Retrieved from http://studymoose.com/macbeth-as-an-object-of-criticism-essay 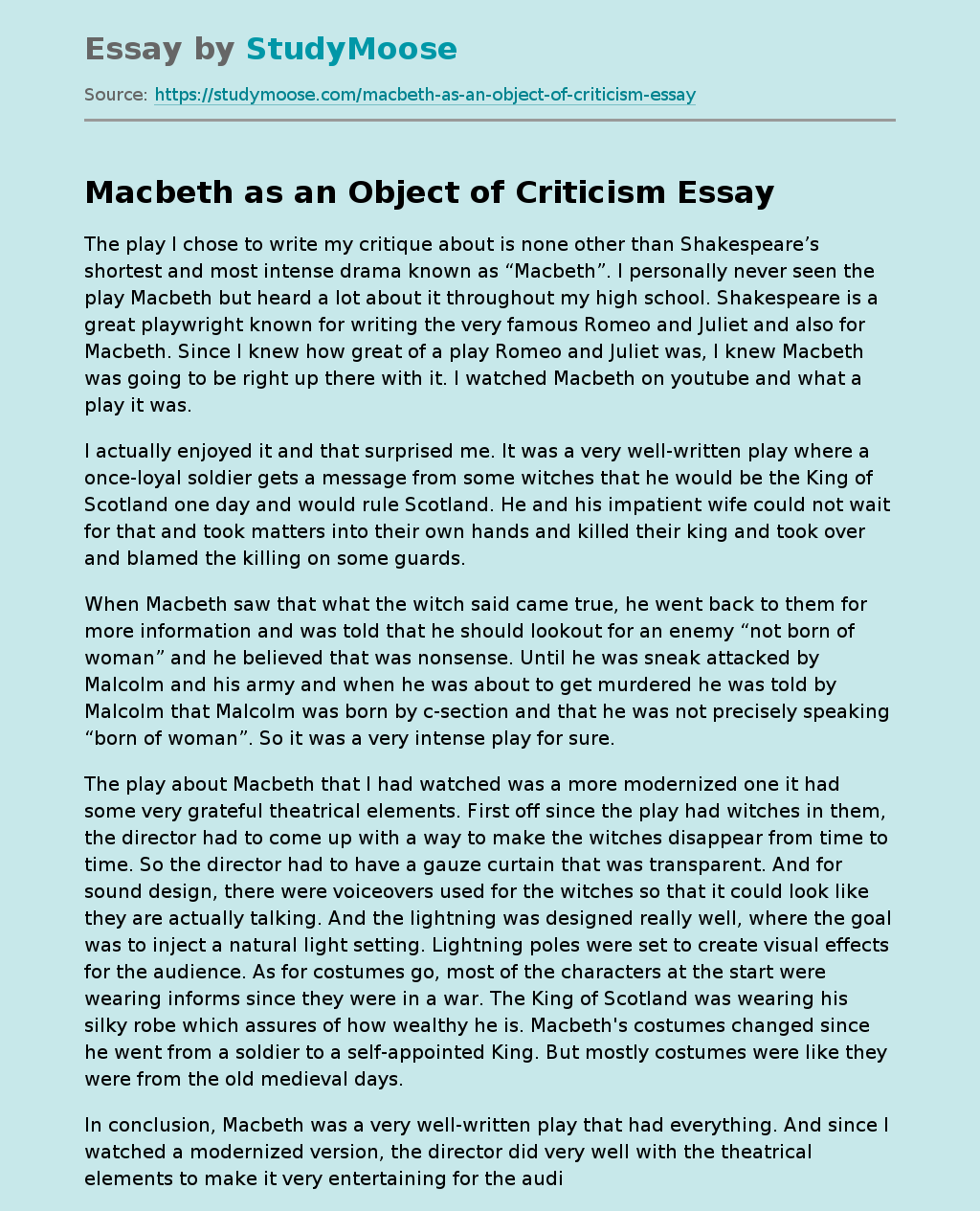