A discussion of the imagery of animals in William Shakespeare’s “Macbeth”.

In Macbeth, the imagery of animals behavior and class status advances the theme of animals in relation to human characteristics. The examples discussed in my paper will make it quite clear that this imagery is evident, throughout the play. In Act 1 sc. 3 line 8, the first witch chants and says that the sailor is the master of the Tiger. The witch is comparing the man to a Tiger. The tiger is a very good animal and is near the top of the Elizabethan World Picture.

Don't use plagiarized sources. Get your custom essay on
“ Animals In Macbeth ”
Get custom paper
NEW! smart matching with writer

Hence the man is good. Furthermore the witch say’s that she herself is like a rat without a tail. Thus she is missing something important. The witch is incomplete, just like the rat. Furthermore I believe she is hiding something because when you are missing something you are apt to be very self conscious and hide it. In addition the rat is veer low on the chain of being.

The next passage is Act 1 sc. 7 line 49. In this passage Lady Macbeth is quoted saying “like the poor cat I ‘th’ adage” (1, vii., 49). That means “the cat who eats fish but will not get his feet wet ” (Folgers, p 40). Lady Macbeth is telling Macbeth that he is like the cat because he wants to become king but he won’t get his hands bloody. However Lady Macbeth would find someone else to get their feet wet, someone to do her dirty work. In act 2 scene 4 line 15, the old man and Ross talk about the recent murder.

The old man says that the killer, an owl made sure no one was looking and attacked the falcon and killed it. The owl, lower then the falcon on the chain of being usually eats mice, which is low on the hierarchy. But this time the owl eats the falcon whom is usually on the top of the hierarchy. Later in the play during act 3 Macbeth talks bout the list of dogs and the list of men. On line 140 in sc.1 Macbeth compares the murders with the lowliest of dogs. In the next act, Act 4 three witches use very lowly animals to describe Macbeths kingship. In sc. 1 lines 1-30 the witches say that Macbeths is very similar to the hedgehog, toads and lizards. These animals describe Macbeth in different ways. The hedge hog shows that Macbeth is as greedy as a pig. The lizard shows that he is as slippery and slimy as a lizard. Finally the toad might be symbolic of Macbeths soul, his soul is as ugly as a toad. Throughout the play the animals behavior and status relate to human characteristics. Sometimes these relationships are very abstract and sometimes they are quite evident. To conclude the animals represent human characteristics very accurately. 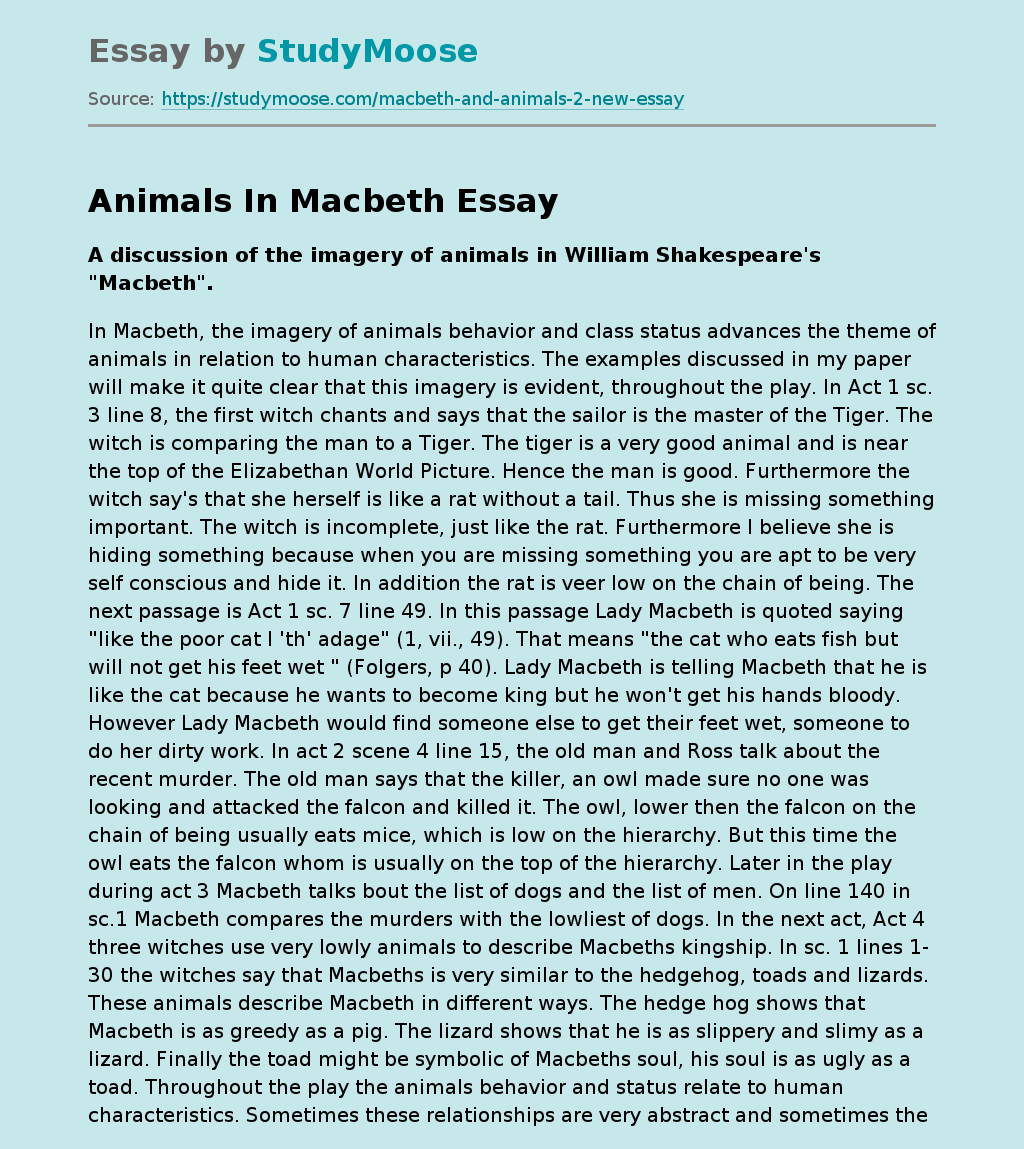