At the beginning of “Macbeth”, Macbeth is a true soldier who has no guilt within himself and he is proud of killing people fighting in battles. Once he has murdered King Duncan, his is haunted with guilt, he cannot sleep, enter a room and he is full with agony. This leads him to further consequences. But surly, no one can murder some without pay the consequences.

Macbeth guilt starts to develop after the killing of Duncan. Macbeth says to Lady Macbeth shortly after the killing of Duncan on Act 3 scene 2; “O full of scorpions is my mind, dear wife” This metaphor suggests an image is his mind which is currently full if evil deeds which torture his mind because of his actions which he had killed a totally innocent person because king Duncan did not do any evil deeds to Macbeth so why should Duncan suffer? He is also full of agony of guilt because he is new to this feeling because he didn’t experience this “guilt” when he was killing other innocent people in battle.

Don't use plagiarized sources. Get your custom essay on
“ Developing of Macbeth guilt ”
Get custom paper
NEW! smart matching with writer

This image of guilt shows to me that Macbeth has made a foolish decision, which he has made by killing Banquo.

Because He already got away with the 1st murder he probably thought that he could get away with it this time as well. I think this encourages him to commit more violence and murder even though he knows what he has done is wrong and now he is left with a harmful emotive feeling – guilt.

In Act 2 scene 2 , Macbeth says to himself, “I have supped full with horrors”, This metaphor show the feeling of guilt because the word “full” shows me that he knows what he has done is wrong and he has lost his appetite for killing and wants to stop .

Macbeth intends to sit down while he see Banqou’s ghost in his seat and says
Thou canst not say I did it; never shakes
they gory locks at me

Show that completely devastated by fear and guilt and he again realises what he has done was wrong. He says this in presence of Ross, Lenox and other Lord. This shows that due to the over powered guilt he cannot keep what he has done wrong inside and keep it a secret.

In Act 5, Scene 1, Lady Macbeth is sleepwalking and hallucinating blood on her hand and says

Here’s the smell of the blood still; all the perfumes of Arabia will not sweeten this little hand

This suggests to me that Lady Macbeth’s guilt leads to a deterioration of mental health and lack of sleep. Lady Macbeth could is worried and constantly thinking and could be also stressed about Macbeth’s murder.

Out, out, brief candle!
Life but a walking shadow, a poor player
That struts and frets his hour upon stage,
And then is heard no more.

Suggest to me that he meant that, before when he was king he was the boss and can do whatever he wants without consequences and now, that no one is with him, he is small as a candle. The words “walking shadow” suggest to me that he lives in a world with no faith and god, so if he died it wouldn’t matter to him. This possibly could be that the presence of guilt at the maximum level where it has shattered him and his feeling. This is the point where guilt is at its highest peak. 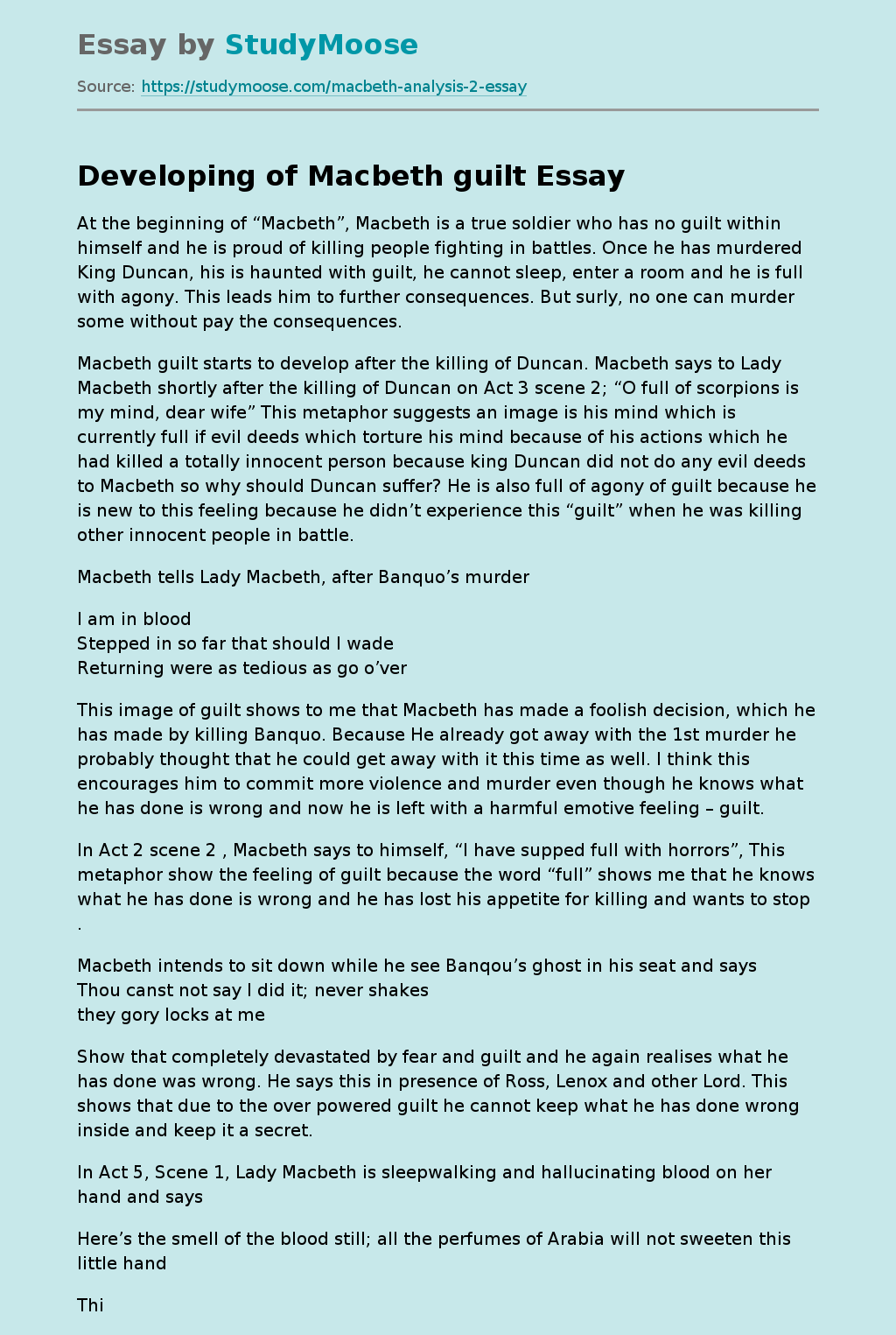