A discussion of Shakespeare’s “Macbeth”, portraying the protagonist, Macbeth, as the tragic hero.

Macbeth: A Tragic Hero “(Sometimes a tragic hero is created, not through his own villainy), but rather through some flaw in him, he being one of those who are in high station and good fortune, like Oedipus and Thyestes and the famous men of such families as those.” (Poetics, Aristotle). Every great tragedy is dominated by a protagonist who has within himself a tragic flaw, too much or too little of one of Aristotle’s twelve virtues.

Don't use plagiarized sources. Get your custom essay on
“ Macbeth: A Tragic Hero ”
Get custom paper
NEW! smart matching with writer

In Macbeth, by William Shakespeare, Macbeth, a great Scottish general and thane of Glamis, has just won an important battle, when he is told by three witches that he will become thane of Cawdor and then king of Scotland. After Macbeth is given Cawdor by King Duncan, he takes the witches words for truth and conspires against Duncan with his wife. When Duncan comes to Macbeth’s castle that night, Macbeth kills him and takes the crown for himself after Duncan’s sons flee from Scotland.

Then Macbeth reigns for a while, has several people killed, and is eventually slain by Macduff when he and Malcolm return leading the armies of England. Often people read the play and automatically conclude that Macbeth’s tragic flaw is his ambition; that he is compelled to commit so many acts of violence by his lust for power. However, by carefully examining the first act, one can determine the defect in Macbeth’s character that creates his ambition; his true tragic flaw.

Macbeth’s tragic flaw is not his ambition as most people believe, but rather his trust in the words of the witches and in his wife’s decisions. At the beginning of the play Macbeth has no designs on the throne, and he does not start plotting until his wife comes up with a plan. When first faced with the witches’ words, Macbeth expresses astonishment and disbelief rather than welcoming them when he says, “…to be King stands not within the prospect of belief, no more than to be Cawdor….”(1.3.73-75). When confronted with the witches’ proclamation that he is to be king, Macbeth responds as a loyal subject would; not as a man with secret aspirations in his heart. He has no reason to hide his true feelings at this point so therefore it can be assumed that Macbeth has not yet truly considered killing the king. Even after the first of the witches’ predictions comes true, Macbeth does not plot against the king but instead decides to leave it to chance. “(Aside) If chance will have me King, why, chance may crown me, Without my stir.”(1.3.143-144). Macbeth has already been granted the title of thane of Cawdor, but still he acts as though a loyal subject would. His lack of ambition is stressed here by the fact that the actor is speaking the thoughts of the character rather than words that the character says aloud. It is Macbeth’s wife that decides to convince her husband to kill Duncan after she has learned what has happened, “Glamis thou art, and Cawdor, and shalt be what thou art promised. Yet do I fear thy nature; It is too full o’ the milk of human kindness to catch the nearest way.”(1.5.14-17) Lady Macbeth is saying that her husband is too kind to kill the king but that he will get what has been promised to him. She goes on to say that she will bring him around to her way of thinking. So obviously, Macbeth himself is not excessively ambitious, he has no desire to kill Duncan until Lady Macbeth plants the thought within his heart. Macbeth’s true tragic flaw, the force behind his ambition, is his gullibility, his willingness to trust the witches and his wife; no matter how terrible their ideas may be. By the end of the fourth scene Macbeth is already beginning to acknowledge the witches’ words as truth after Malcolm becomes Prince of Cumberland, the heir to throne, “(Aside) The Prince of Cumberland! That is a step on which I must fall down or else o’erleap, for in my way it lies.”(1.4.48-50) Less than a day has passed, and already Macbeth is beginning to believe in the words of the witches, Satan’s representatives on Earth. Despite centuries of tradition that tells Macbeth that witches are evil, and therefore lie, he is already thinking that what they say is true. While talking with his wife about her plans, Macbeth says, “We will proceed no further in this business…”(1.7.31), and then, less than fifty lines later, they are working out the details of their nefarious scheme. Macbeth quickly accedes to his wife’s wishes, displaying his willingness to trust his destiny in the hands of others. If Macbeth had not placed so much trust in his wife and in the witches, perhaps he would not have become ambitious and killed a man he loved and admired. His gullibility is his true tragic flaw as it is the cause of his ambition and the weakness that allows evil to take root in his soul. Macbeth’s ambition is not the fatal flaw within his character, but rather that which leads to his ambition; his trustful nature. This is evident in that he does not desire the throne until after he finally accepts the predictions of the witches as truth; and he does not want to kill the king until after his wife convinces him that he should. If Macbeth had not trusted the emissaries of Satan, then he never would have considered killing Duncan and would have been satisfied with being thane of Glamis and Cawdor. And if he had not trusted his wife, Macbeth would not have killed a man he loved and revered, an act that eventually led to his downfall. Not everybody in this world can be trusted, there are too many people who are only looking out for their own best interests. While one should not become paranoid and trust nobody, lest they become cut off from society, safeguards must be established against these fraudulent people so that they cannot take advantage of an unprepared populace. 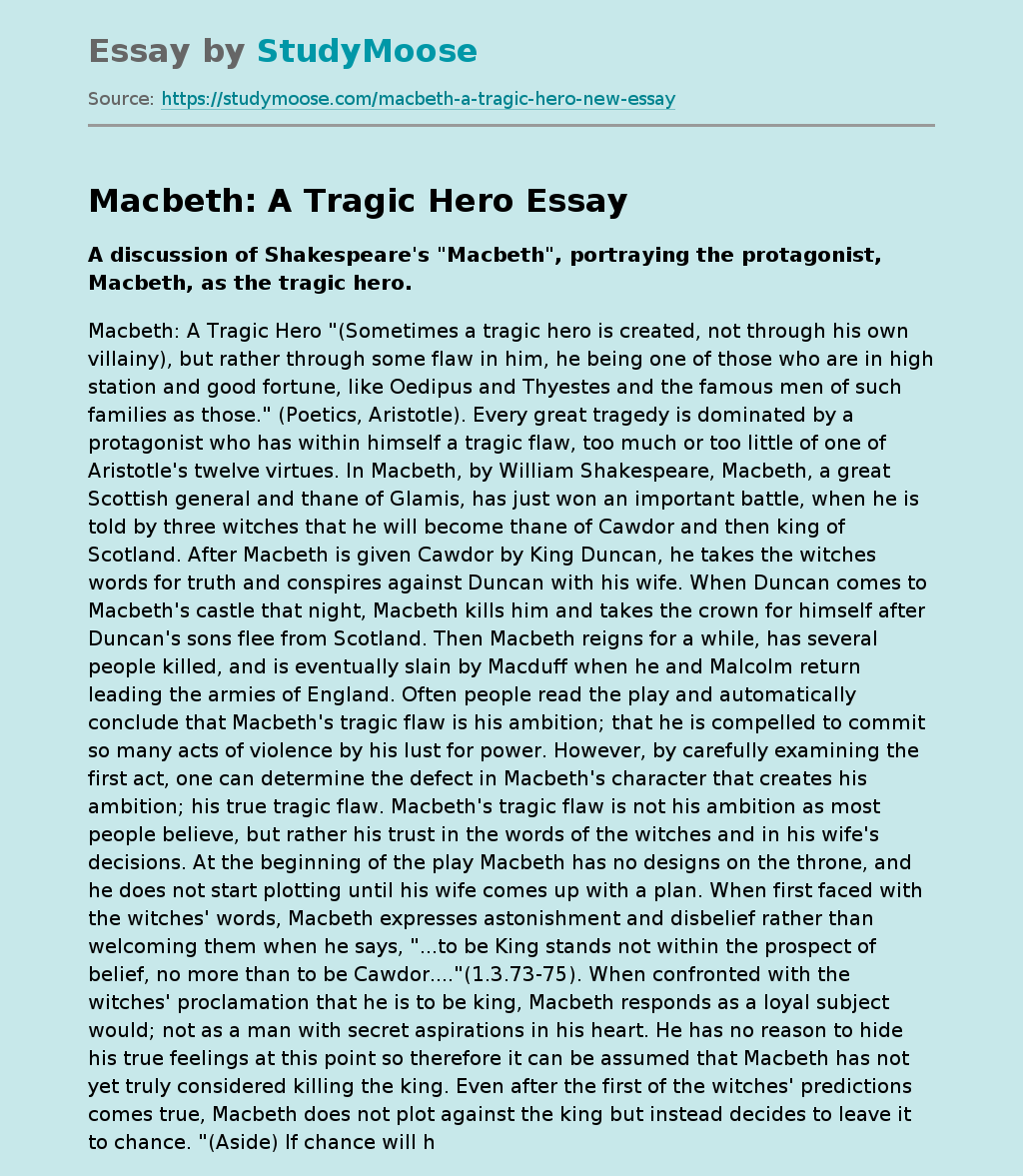