What Crimes Did Macbeth Commit?

A discussion of why Macbeth is guiltier by his actions than Lady Macbeth is from her’s in William Shakespeare’s “Macbeth”.

Macbeth is a very exciting story containing all kinds of plots and murders. The characters that are killing and are planning murders are all very deceiving and treacherous. Two of the most dangerous criminals in this play are Lady Macbeth and her husband. Together they commit the most dreadful murder by killing the King; Duncan. This is why it is difficult to determine which one of these two is more guilty, because they each do their own part in committing the crime.

Don't use plagiarized sources. Get your custom essay on
“ What Crimes Did Macbeth Commit? ”
Get custom paper
NEW! smart matching with writer

Lady Macbeth would prepare the plan and then encourage Macbeth to go through with it. Macbeth did the actual murdering, he was also the first person who thought about killing Duncan. Furthermore he did some killing on his own. Lady Macbeth did not have any involvement in these cases. Based on these facts, Macbeth would be found more guilty than Lady Macbeth.

The very first murder in this story was committed on Duncan. This crime was planned by both Macbeth and Lady Macbeth. The actual murder was done by Macbeth, making him more guilty of the crime. Lady Macbeth just talked about committing the crime, but she never actually went through with it nor would she ever, and that is all that counts. Talking about committing the incident is very different from actually doing it. Lady Macbeth did a little more than just talk about it though.

She also urged Macbeth into doing it and that is what makes her part of this crime, but she is not as guilty as Macbeth. He really didn’t have to listen to what his wife said. Macbeth had a mind of his own and he could make his own decision. The other murders that Macbeth was involved in were not committed by him, but were ordered by him. The people who did the killing had no choice, they had to do it, because they worked for Macbeth. Macbeth knew this and was a bit more guilty in these murders then lady Macbeth was when she urged him. The idea of killing Duncan first came from Macbeth. Macbeth listened to the witches prophecies that said he would become King. Macbeth did not want to wait any longer and he thought the only way to become King was to kill the present King; Duncan. Macbeth later told Lady Macbeth about this and she just wanted to help him and do whatever she could for him, so that he would be happy and be King. She was also excited about becoming a Queen so she pushed Macbeth forward and did not let him back down from doing what he said he’d do. Macbeth had a good chance of becoming King if Duncan was out of the picture, so Lady Macbeth helped stage a plan so that Macbeth could kill him without being caught. Lady Macbeth wanted to do this for herself as well but she was mostly doing this for Macbeth because she loved him so much. Macbeth is a regular murderer throughout the play and is involved in a lot more murders then Lady Macbeth is. She was only involved in the murder of the King while Macbeth was killing people throughout the whole story. He killed lots of men fighting for the King, and later on he killed the King. After killing the King he ordered some of his men to murder Banquo and Fleance, Fleance got away though. Later on through the story when Macduff went to join Malcolm, Macbeth had Macduff’s family killed. Macbeth was a man that murdered far more people then his wife did. So he was a more guilty person then she was. Through the story Macbeth got obsessed with killing others and he wanted to kill more, while Lady Macbeth became so self conscience that she went crazy and killed herself. Throughout the course of the story it is tough to decide who is a more guilty person, but if you look at it through the eye’s of today’s law you will see that Macbeth is more guilty of murder. This is because he had killed a lot people before he killed the King, and when he did kill the King by himself Lady Macbeth had nothing to do with it. She only made a plan and told him to do it and that isn’t as bad as actually committing the crime unless Macbeth was mentally ill. Macbeth was not considered mentally ill though because he went on to become King where he made decisions on his own and ordered even more people to be murdered, and Lady Macbeth had nothing to do with those murders at all. 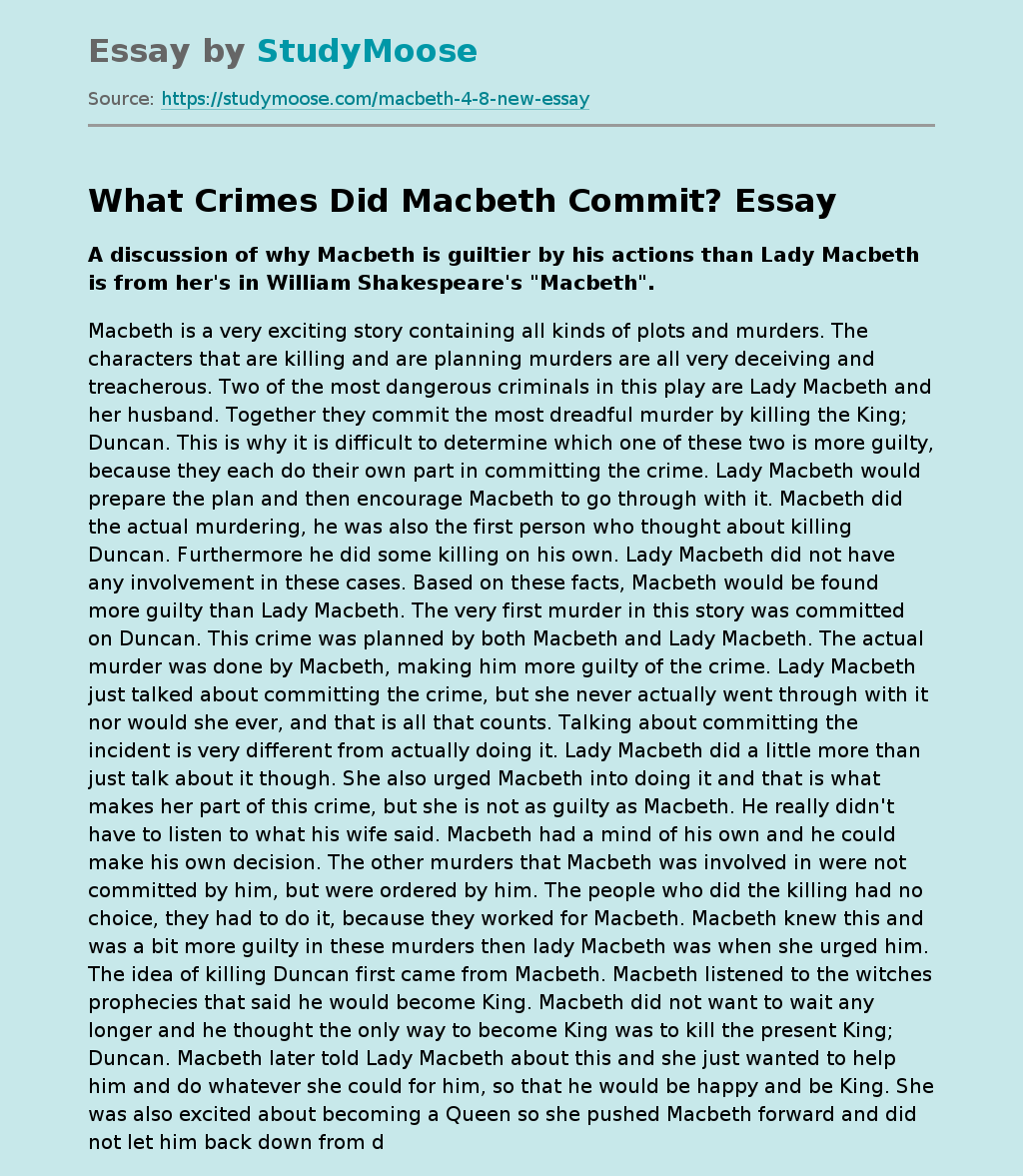