+84 relevant experts are online
Hire writer
Conduct me to mine host. We love him highly and shall continue our graces towards him.
This quote is said by King Duncan and when he says host he is referring to Macbeth. This quote is significant because it shows the trust King Duncan has in Macbeth.
We will proceed no further in this business. He hath honored me of late, and I have bought golden opinions from all sorts of people, which would be worn now in their newest gloss, not cast aside so soon.
This quote which is mentioned by Macbeth, he is honored by the way the King trusts him and doesn’t want the plan to go on.
Get to Know The Price Estimate For Your Paper
Topic
Number of pages
Email Invalid email

The plan is to assassinate King Duncan so he becomes King.

I am settled, and bend up
Each corporal agent to this terrible feat.
This quote which is said by Macbeth he has finally decided that he will carry on with his deed and he would do anything to kill Duncan.
Is this a dagger which I see before me,
The handle toward my hand? Come, let me clutch thee.
This is said by Macbeth, where he is going to kill Duncan but just before that he sees an illusionary dagger in front of him with its handle pointing towards me.
I have thee not, and yet I see thee still.
This is also Macbeth and in this he is saying that i have you but i still don’t have you.
I go, and it is done. The bell invites me.
Hear it not, Duncan, for it is a knell
That summons thee to heaven or to hell.
In this dialogue which is said by Macbeth he is saying that the bell summons him to kill Duncan. Wether Duncan will go to Hell or Heaven.
That which hath made them drunk hath made me bold. What hath quenched them hath given me fire.
This sentence which is mentioned by Lady Macb eth is actually meaning that the drink which she has made the guards drink has quenched their thirst but it has fired her up in her very deadle ambition.
Had he not resembled
My father as he slept, I had done ‘t.
This is also said by Lady Macbeth in which she is saying that if Duncan did not resemble her father’s looks then she would have done the deed by herself.
(looking at his hands) This is a sorry sight.
This is Macbeth in which he is looking at his hands and crying over the disgusting and sorry sight.
But wherefore could not I pronounce “Amen”? I had most need of blessing, and “Amen” stuck in my throat.
This is Macbeth again in which he is mentioning that when he needed to say Amen the word got stuck in his throat.
I’ll go no more: I am afraid to think what I have done; Look on ‘t again I dare not.
This dialogue is said by Macbeth. In this dialogue he saying that he will go no more to the place where he has gone and commited the murder. He wont even think of what he has done.
What hands are here? Ha! They pluck out mine eyes. Will all great Neptune’s ocean wash this blood clean from my hand? No, this my hand will rather the multitudinous seas incarnadine, making the green one red.
This is Macbeth in which he is saying that these hands which he has are plucking his eyes out. He also mentions that not even Great Neptunes oceans will wash this blood from his hands, instead these hands will rather colour the green seas making them red.
Wake Duncan with thy knocking. I would thou couldst.
In this dialogue which is said by Macbeth he is felling extremely sorry about what he has done and he wished that Duncan could wake up with his knocking.
Had I but died an hour before this chance,
I had lived a blessèd time, for from this instant there’s nothing serious in mortality.
All is but toys
This quote which is said by Macbeth he is deeply remorseful and is saying that he wanted to die just before an hour of the killing of Duncan. He also mentions that from now on nothing is serious and all is just a sick joke.
Hannah Valdez
Share 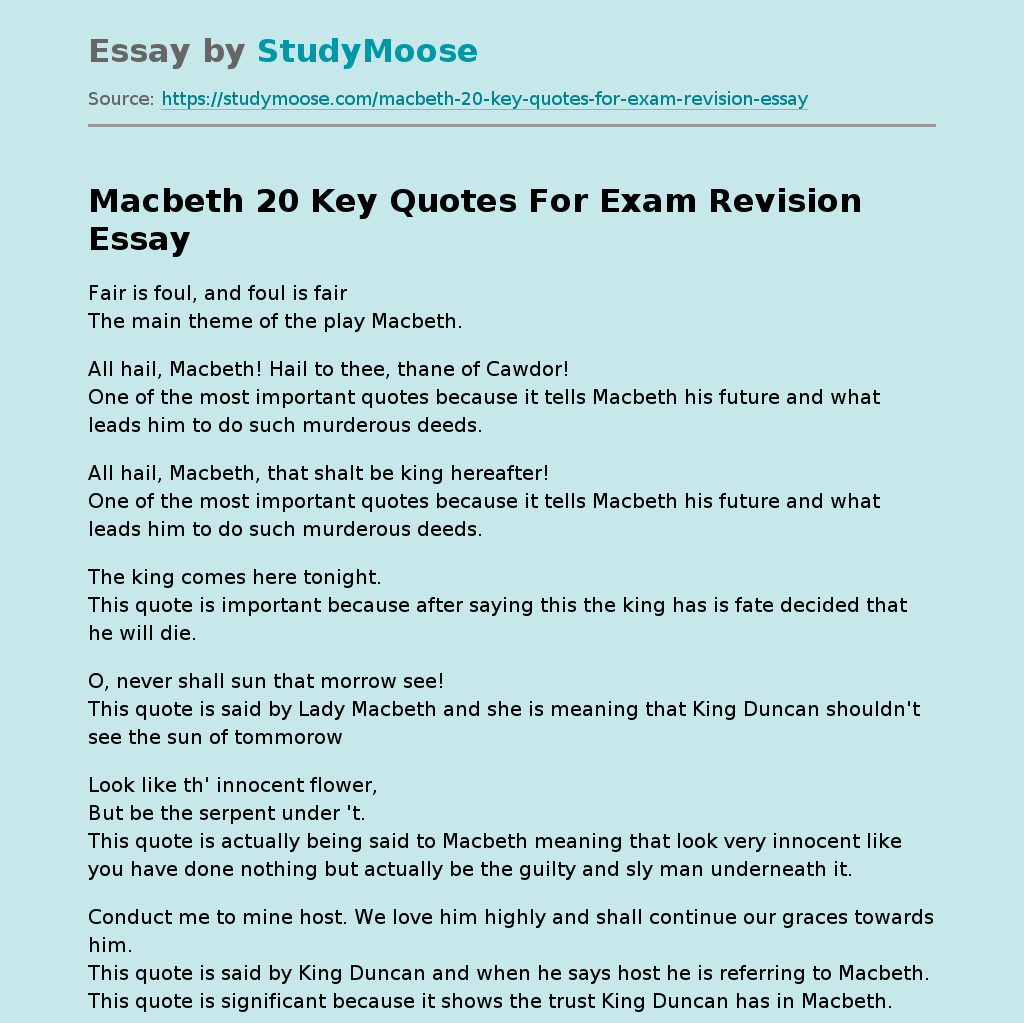