Lytton Strachey’s excerpt depicts the popular misconceptions and the actual reality of who Florence Nightingale was. Strachey’s euphemism of calling Nightingale “the Lady with the Lamp” as opposed to the “agitations of her soul” portrays the idea that her reality was much more different than her false perceptions. Though he admires Nightingale with awe, he conveys his opinion by using dark and tainted diction – “morbid”, “Demon possessed her”. Though this might suggest into the thinking that Nightingale was evil and beyond human capabilities, it manifests that she was an extraordinary human with suffrages that make her a stronger individual.

Don't use plagiarized sources. Get your custom essay on
“ Lytton Strachey’s excerpt on Florence Nightingale ”
Get custom paper
NEW! smart matching with writer

Strachey’s syntactical style enables the reader to dilute a clear view of Nightingale’s life. His creative tone in using rhetorical questions eradicates Nightingale’s courageous endeavor and capabilities. From lines 20 to 22, Strachey exhibits the truth that even when her sister had shown a “healthy pleasure” in tearing up her dolls, she should a “morbid one” sewing them back up.

This idea seems particularly demonic and malevolent (the feeling she expresses while sewing her dolls) because she feels a sense of guilty enjoyment in fixing something that is not perfect. Her gratification is that of healing and “herself as matron moving about among the beds”. Continuously, these rhetorical questions delineate a fact and expound it further enhancing the reader to fully understand the structure of Nightingale’s motivations and drive.

Another strategy that Strachey uses is the use of long and ornate sentences that are broken off by telegraphic ones.

This technique enables the audience to feel an utmost sincere admiration for Nightingale (line 2 through 12). With the reader’s emotions at a peak, Strachey quickly halts your train of thought and hits you with a complete opposite idea. This makes the reader more vulnerable to what the author has to say because it catches them at their weakest moment (overflowing with sentiment). Strachey further commends in making Nightingale look like a legendary women who has undergone apotheosis causing the story to become an epic one.

By living in the era of the Victorian age, Florence Nightingale’s story is an even more honorable one. This period came with the discrimination of women and their societal roles which intervened with Nightingale’s bourgeoisie life. Opposing all the luxuries and dealing with the struggle pushed upon her makes her an immense figure in time. She fought for what she wanted: she opposed her family, the elite society, and the status quo that women didn’t work. With this, she possessed the energy to collect knowledge and achieve what she had “determined she would do in the end”: – gain her independence. Unlike the myths that casted Nightingale to a simple life, she “was not as facile fancy painted her”. She was a courageous woman who fought for what she believed in, even if it was morbid.

In the last paragraph, Strachey defies a quote that her mother gives about Miss Nightingale. In this, she mockingly states that “We are ducks… who have hatched a wild swan”. This quote, though given by Mrs. Nightingale, represents Florence Nightingale’s perception of her family (taken from the mother viewpoint). In reality she is blind that the idea that Florence has a different path to follow which involves helping the ill-fated humans. It is as if Mrs. Nightingale is embarrassed that she has done something with her life. In reality, Miss Nightingale is “an eagle”. She casts a brave, bold and independent shadow that wants to soar above the limitations of her family and social class.

Florence Nightingale’s strive is marked with accomplishments and greatness because she surpassed all her obstacles, “held firm, and fought her way to victory”. This suffrage has made her stronger which is one of the reasons Strachey admires her. She did not get her life job on a silver platter; she worked for it, and passed through much hardship, making the prize the more rewarding. His via from the popular perceptions to reality permits the reader to comprehend the illusion and see that the reality was even superior and audacious; “in the real Miss Nightingale there was more than was interesting than in the legendary one”. Even his melancholic tone and diction towards Nightingale renders the stance that she was an amazing woman and worked her way out of the “tortures of regret and remorse” that were compelled deep inside her mind. 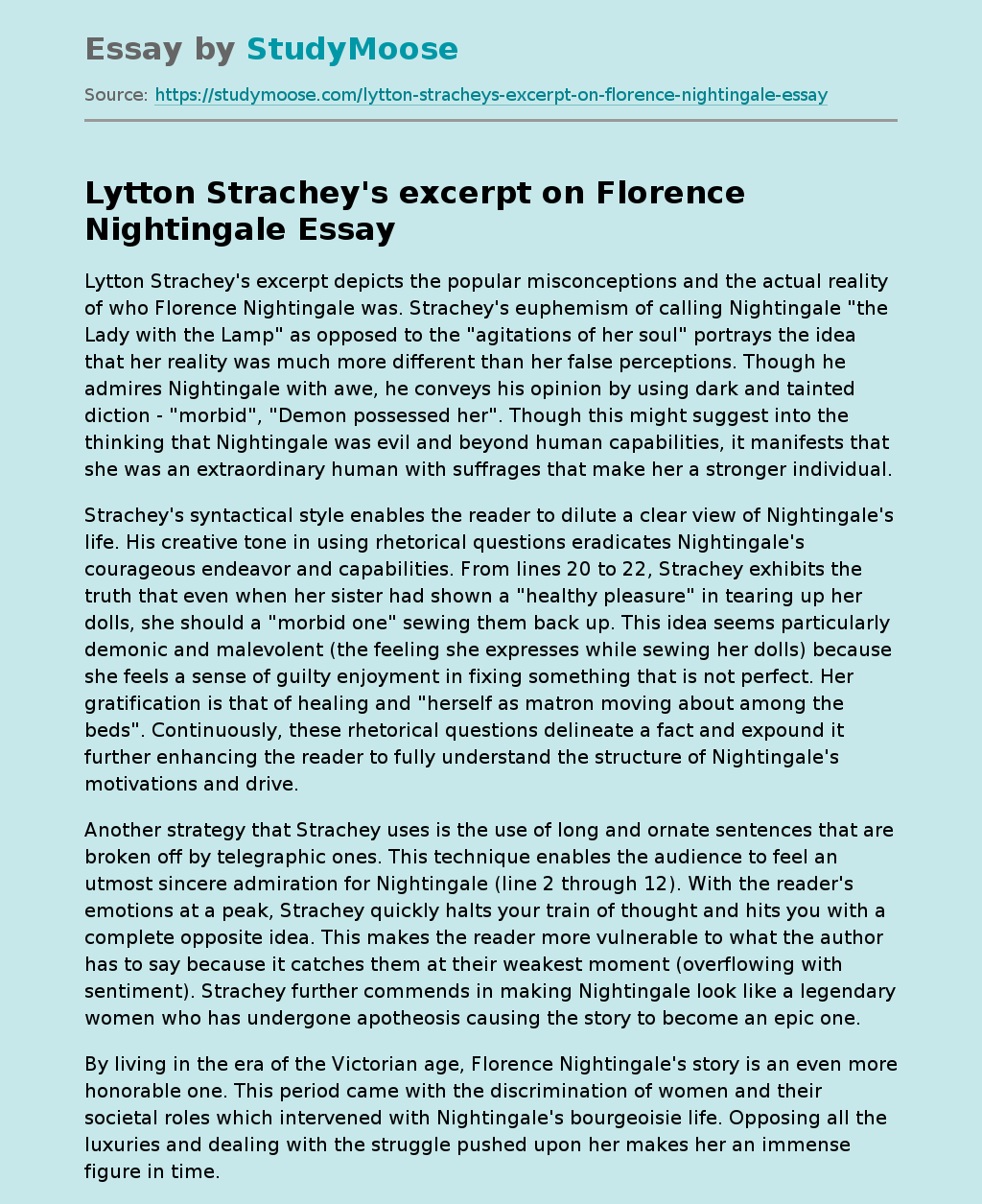