Ludwig Van Beethoven is a composer that has an ascendant musical figure in the period between the 18th-century classical era styles that he admire sand the 19 th-century romantic styles that his music would come to anthropomorphize .In classical music, Beethoven remains as one of the most famous and creative composers that makes everyone acknowledge his talent.

His father, Johann who is a musician that loved to taught young Ludwig to play piano and other musical instruments.

Moreover, Johann is also an alcoholic that loves to drink every day. Sometimes, young Ludwig is forced to woke up in the middle of the night just to perform for his father’s colleagues. Unfortunately, Ludwig was always getting beaten by his father, Johann ifhe tries to refuse.

With the passion for piano playing, he began to try composing music when he is just twelve years old.

As Ludwig grows up, he decided to moves to Vienna, Australia for better education of playing the piano but he is forced to go back Bonn to took care of his ill mother, who died after afew months later. In 1972, the year that his father passes away, he went back to Vienna and study piano with Haydn. After that, he stays in Vienna and never went back to his hometown ever again.

Furthermore, Ludwig is having a good life in Vienna without getting married and did not have any children of his own.

Because of this reason he became too competitive with getting custody of his nephew till he did not compose music for two years. In 1801, Ludwig slowly starts to lose his hearing as he is being more and more popular as a musician and composer. Even though, Ludwig did not give up on his career and keep going to perform in the public.

He did not want to reveal his condition because he knew that all his effort and career will be ruined by the time he reveals his deafness.By1817, Ludwig is completely deaf but that is the time that makes him started a period of amazing and glorious composition. Ludwig tries many kinds of ways to treat his deafness such as special hearing trumpets like the figure 2below.

Despite all of this, Ludwig continues to compose more of the famous compositions.Many people will think that how can a deaf person  compose music without hearing anything? The fact is, Ludwig has already been listening to music for half of his life since he was young. And so, he knew the sound of instruments and voices when they are played together.

When he was younger, he composes music that has a higher note but looking at his condition, he started to compose music that has a lower note so that he could hear more clearly. Yes, of course, he still trying his best to perform on the stage but unfortunately, he ended up destroying the piano with banging his head to listen of clearer notes.

Therefore, in the age of 45, Ludwig completely loses his hearing, he gave up performing and public appearances. His complete deafness has been changing Ludwig to avery quiet and private person until he can only communicate through writing on a notebook with his friends. From that onward, Ludwig’s music style changed. He changed from classical music to romantic music which has a darker tone.

Lastly, Ludwig dies on March 26, 1827, when he was just 56 years old. Due to his alcoholism that has caused him liver and kidney failure. With this in mind, no matter what the causes, Ludwig Van Beethoven legacy will remain through his music. In this, we also learn that people with disabilities  do not ever give up your dream like Ludwig that set us a very good example References of nationality and background:

In conclusion, Ludwig Van Beethoven is one of the most popular and outstanding composers of the western art music tradition. He moderates his music style which is Classical style, full of equilibrium and balance to the Romantic style which has more emotion and impression.

Moreover, every composition that composes by Ludwig Van Beethoven has its own story and meaning behind it which makes the song more meaningful and worthwhile. He constantly compose music into new areas and he could take a simple story of ideas to make a song that  impressed everyone. 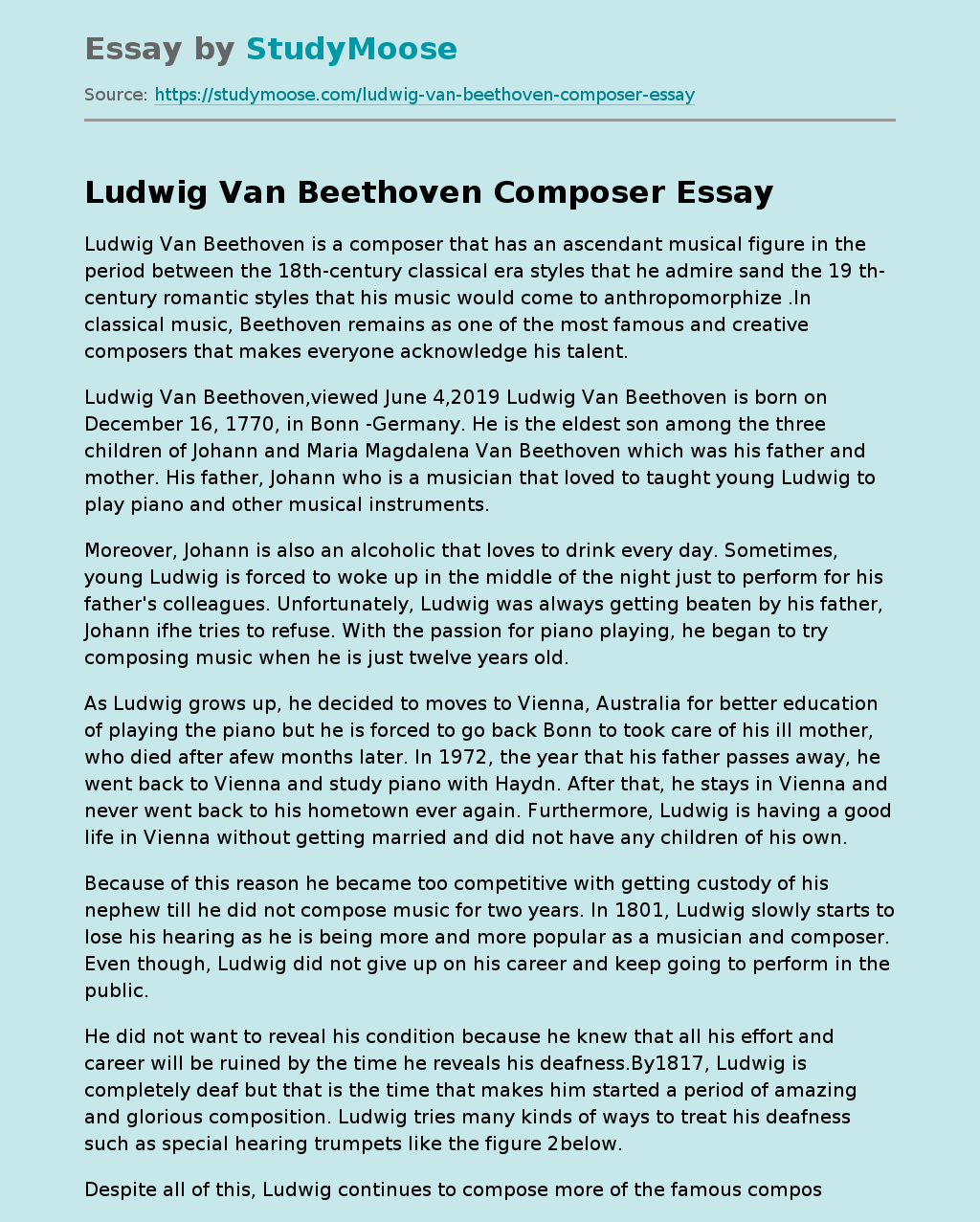