Love and Marriage through Success

Daisy’s struggling marriage, Tom’s affair, and Gatsby’s unfulfilled heart represent the truth of how no matter how perfect someone’s life may seem, there are always imperfections kept as secrets. While Tom and Daisy put on a front of a loving, successful marriage, both spouses were having affairs. Tom was a devious womanizer with a temper while Daisy was bored with her life and enthralled with money. The biggest misperceived life was Jay Gatsby’s. Gatsby “invented just the sort of Jay Gatsby that a seventeen year old boy would be likely to invent, and to this conception he was faithful to the end” (Fitzgerald 105).

Don't use plagiarized sources. Get your custom essay on
“ Love and Marriage through Success ”
Get custom paper
NEW! smart matching with writer

His wealth and charm turned him into a local celebrity that many adored. However, Gatsby’s wealth was gained through illegal activity and he was never truly happy without Daisy. From his youth, Gatsby longed for wealth. He even dropped out of school because he couldn’t stand the janitorial job he needed to pay tuition (Fitzgerald 104).

Though Gatsby has always wanted to be rich, his main motivation in acquiring his fortune was his love for Daisy, whom he met lied to about his supposedly wealthy background to earn her admiration. When Daisy married Tom, Gatsby dedicated himself to winning Daisy back. Myrtle and Daisy’s portrayal of wealthy, fabulous women who are in fact yearning women of amoral values provide perfect examples of how often times the way someone’s life is perceived is simply a mask and a delusion. Throughout the entire story, Gatsby views Daisy as woman of perfection, charm, wealth, and grace.

In reality, Daisy falls short of Gatsby’s ideals. She is beautiful and charming, but also shallow and bored. Daisy proves her nature when she chooses Tom over Gatsby, then allows Gatsby to take the blame for killing Myrtle Wilson even though she was driving the car. Daisy is in love with money, ease, and luxury, much like Myrtle Wilson. Myrtle is provided an apartment and many luxurious items from Tom, Daisy’s husband and the man she is having an affair with. At one point in the book, she refers to her one nice dress as if it were just an article of clothing she wore around the house to impress her house guests (Fitzgerald 31).

In front of Tom and Myrtle’s friends, she acts as if her everyday life is one of wealth, when she is actually married and poor.The prominent secrecy and deceiving intentions found in Nick’s group of friends are proof that nobody’s heart and intentions are ever as pure as they seem. While Nick is attracted to the fast-paced, fun-driven lifestyle of New York, he finds the lifestyle of his friends grotesque and damaging. After a day spent with Tom and his mistress, he said “I was within and without, simultaneously enchanted and repelled by the inexhaustible variety of life.” (Fitzgerald 35).

This inner conflict is seen in Nick’s romantic affair with Jordan Baker. He is attracted to her boldness and sophistication, but also finds himself repelled by her dishonesty and her lack of consideration for other people. Throughout the entire book, Nick and his friends do not only withhold their own secrets and intentions, but keep each other’s harmful secrets as well. Jordan and Nick are both aware that Tom is cheating on Daisy, yet neither of them tell her. Nick and Jordan also help Gatsby and Daisy meet and begin their affair. Gatsby’s true intentions in building a friendship with Nick are not built on a true desire for friendship, but in his need for Nick to reconnect him to Daisy.

Love and Marriage through Success. (2021, Apr 26). Retrieved from https://studymoose.com/love-and-marriage-through-success-essay?post 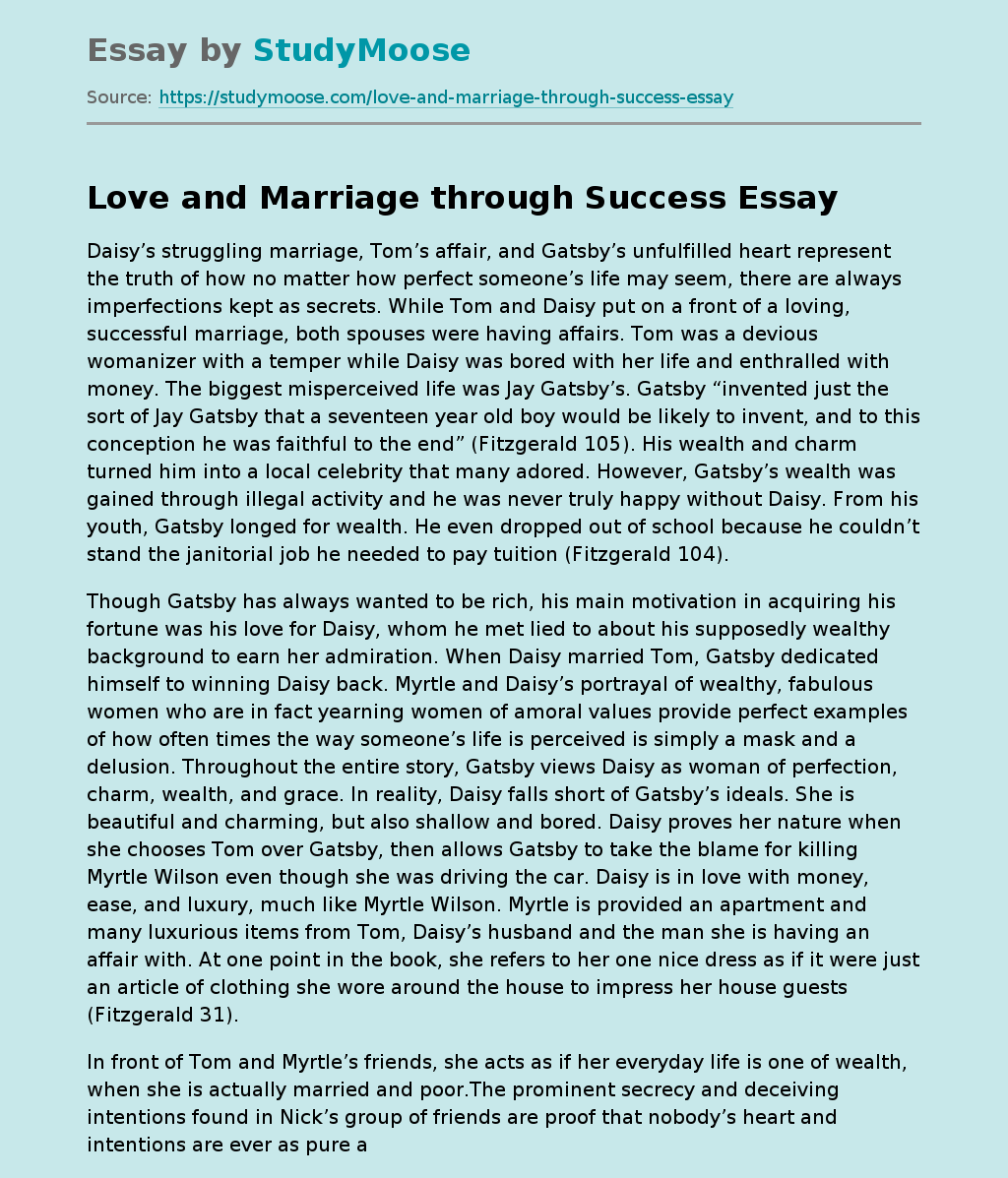