Marriage is something we all want today but do we really want to fall out of love, deal with the same person forever?”Marriage is the only war in which you sleep with your enemy.”–François de la Rochefoucauld.In other words, Rochefoucauld believes that one spouse will fall out of love, when this happens he/she will see his partner as an opponent. Kate Chopin in “The Story of an Hour” and in “Can Can” by Arturo Vivante shows us how both married couples fall out of love, all thought I believe one is better than the other.

Don't use plagiarized sources. Get your custom essay on
“ Love and Marriage ”
Get custom paper
NEW! smart matching with writer

In “The Story of an Hour” there’s a married couple, Mrs.Mallard and Brently Mallard. One day her sister Josephine told her that her husband Brently passed away in a railroad disaster. She didn’t seem sad or devastated. Her reaction towards his death was surprising because she felt a seam of joy when she heard that he had died which made no sense pointing the fact that she was sad and depressed minutes before.

“There stood, facing the open window on a comfortable roomy armchair. Into this she sank, pressed down by a physical exhaustion that haunted her body and seemed to reach into her soul”. The passage indicates that Louse Mallards love for Brentley had vanished because the phrase “haunted her body” signifies that her husband had controlled her for many years. This controlling relationship “reached her soul”, meaning it wrecked her from the inside out. It was mental and physical abuse that affected Mrs.

“She could see in the open squares before her house the tops of trees that were all aquiver with the new spring life. The delicious breath of rain was in the air”. In Fact this passage indicates that Mrs. Mallard might be upset over her husbands death but thus sentence represents something outside that.

This is the first explic example of happiness she experience. Spring life symbolizes a new life for Mrs. Mallard, she might be feeling a sense of freedom and relief over her husband’s death. This sentence is the first time that i can see the sense of peace and tranquility she felt. She wasn’t in love at all she felt controlled by this man.

“When she abandoned herself a little whispered word escaped her slightly parted lips. She said it over and over under her breath: “free,free,free!” The vacants stared and the look of terror that had followed it went from her eyes.They stayed keen and bright.Her pulses beat fast, and the coursing blood warmed and relaxed every inch of her body.”

Passage indicates that, Mrs. Mallard has no love for her husband because she seeks under her breath, her husband almost still has control over her at these first few moments of freedom. She realizes that she no longer has to answer to him about what she chooses to do. She realizes that she is actually completely free to do as she pleases she can’t do anything except find her new love and joy.

It seams that the grief she demonstrated earlier for the people that broke the news of her husbands death to her seems to have evaporated. She can literally feel the relief and relaxation flowing through her body, making us wonder what her husband did to her that was so bad. It mentioned at the beginning of the story that she has a heart condition, could be connected to her fast pulse.

Here we can see she felt trapped because she no longer felt love. “And yet she had loved him–sometimes.Often she had not. Whatd did it matter! What could love,the unsolved mystery , count for in the face of this possession of self assertion which she suddenly recognized as the strongest impilse of her being!”

My last example clearly shows she only loved him part of the time, and that is no way of living in a marriage. Does love not matter ? Did she actually love him ? or did she simply feel eros twowards him ? This is when Mrs. Mallard realizes that her tragedy was truly a blseeing in disguise.No longer does she live for anyone else but herself. Her lfie is hers and hers alone to live as she please. Clearly shows them falling out of love and fighting like war enemies.

Can-Can by Arturo Vivante, talks about a married couple who is going more thorugh confusion not falling out of love. Husband is having an afair with a women called Sarah who is also married. Story starts at the husbands marital home where his wife is playing with her kids, at this point he starts to question himself if its really worth having an afair.

” Alright his wife said brightly as though he were doing her a favor. As a matter of fact she didn’t really like him to leave she felt safer with him at home and helped look after the children especially the baby”This passage indicates, that she still has some feelings for him. She felt safe around him. However she didnt ask where he was going as if she didnt care about him anymore. Author makes it seem as if she is confused maybe still want him back. In The Story of an Hour charachters show more fight it reflects more towards La Rochefoucauld claim regarding marrige.

Under the circumstances, i truly believe they could still fall back in love. He thinks about her. “She was in the living room with their elder daughter. “Do the can can mother” the child said at which she help up her skirt and did the can can kicking her legs up high in his direction.”

The husband doesn’t think she knows about the affair but we question that she might when she does the can can dance as if she’s trying to be sexul. Is his wife showing her husband what he is missing ? In this case i believe they might still love each other, they just need to find each other. For this reason i believe is more of boredom not falling out of love or fighting with your enemy.

To be sure, He still had some feelings for his wife “because all he wanted now was to smoke that cigarette , drink that cup of coffee for the sake of them, and not to give himself something to do.And he wished he could go for a drive free and easy”. He wants to walk away perhaps still thinking of his wife? In fact i believe he loves his wife. Reflecting in the ironic ending when Sarah is lying in his arms but he is picturing his wife doing the can can as she had been earlier.

The can can appears to have had the effect that his wife wanted him after all.
In conclusion i believe that Story Of An Hour shows better examples of a married couple no longer loving each other. It’s a war that only one person can win, in this case the husband as he appears at the end of the story causing Mrs. Mallar to die.

However in Can-Can the husband is having second thoughts about having an affair, end of the story he ends up thinking about his wife. Which is a perfect example of them still thinking about each other not much of a war. 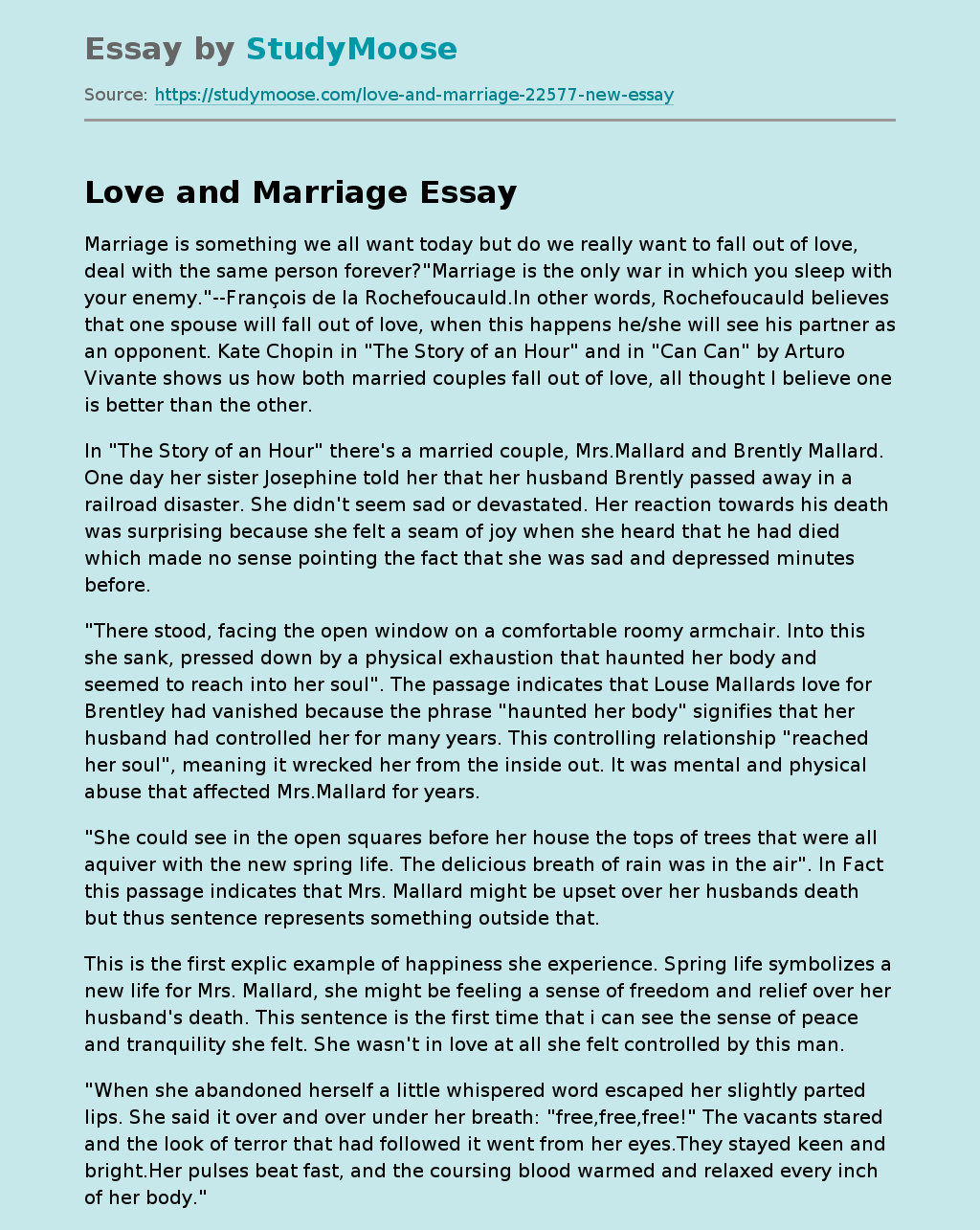