Love and Desire in The Great Gatsby

Don't use plagiarized sources. Get your custom essay on
“ Love and Desire in The Great Gatsby ”
Get custom paper
NEW! smart matching with writer

F. Scott Fitzgerald the author of the book was born in September 24, 1856. The Success of his first novel “The Side Paradise” (1920), made him an instant celebrity. “The Great Gatsby” his third novel was highly regarded. Struggling with alcoholism and Wife’s mental illness, he attempted to reinvent himself as a screenwriter. This paper argues that the theme: “Love and Desire” which was shown in the film, it shows us and realizes to the viewers how a single human being will do everything for their love and desire.

As “Love and Desire” through the main character’s experience, this claim is supported by the literal theories of formalism and different phases of feminism analyzed through the Experience of the character.
In literary theory, formalism refers to critical approaches that analyze, interpret or evaluate the inherent futures of a text. These features include not only grammar and syntax but also in every device such as a meter and tropes. The formalist approach reduces the importance of a text’s historical, biographical, and cultural context.

​“The Great Gatsby” is a story told by Nick Carraway (Tobey Maguire), one of the main characters in the movie. He was the neighbor of Jay Gatsby (Leanardo DiCaprio), Gatsby is an eccentric millionaire. Carraway was curious about his neighbor because he was invited to the one of his famous parties. Nick realizes that Gatsby is in love with Daisy Buchanan (Carey Mulligan), Tom Buchanan wife of Daisy takes his old friend Nick to the city, Where Nick learns that Tom has an affair with Myrtle Wilson, whose husband runs a modest garage and gas station in the valley of ashes. Nick’s mutual friend, a professional golfer Jordan Baker, insisting that Nick plan a “chance” meeting for Gatsby and Daisy. Nick learns that Gatsby, Jay Gatz at the time, and Daisy had once been in love, but Daisy married Tom while Gatsby was in Europe during the Great War. Somehow, Jay Gatz abandoned his old identity, becoming Jay Gatsby and amassing a fortune with the help of notorious criminal Meyer Wolfsheim. Gatsby chose the site of his house in Long Island because it is across the bay from Daisy’s house. From which the green light can be seen at night. Nick manages the first meeting of Gatsby and Daisy together in five years, Gatsby was so nervous at first. However, Gatsby finds his rhythm to talk with Daisy, after their meeting Gatsby invited Nick and Daisy together with her husband Tom Buchanan to his mansion. Gatsby wants Daisy back and told her that she never loved her husband and it turns to an incident, where Daisy drives Gatsby’s car and accidentally killed Myrtle on the road back to their home. She runs out because she thought it was Buchanan’s car. Myrtle’s husband blames Buchanan, but Buchanan informs him that it was Gatsby’s car that killed Myrtle. The mechanic goes to Gatsby’s house, where he shoots Gatsby and then himself. Daisy refuses to confess to her crime, and only a few people, including Gatsby’s father Henry, show up for Gatsby’s funeral.

​The film “The Great Gatsby” shows how love and desire can do. A young military officer, Gatsby fell in love with the debutante Daisy, she promised to wait for him after the war. Gatsby has some reasons not to come back because of his low social status, he wants to give Daisy a better life with him. After a long wait, Daisy marries a man named Tom Buchanan, a wealthy man from east coast. It was an unhappy marriage; Tom has affairs from a different woman. Gatsby’s obsessive desire to relive or change his own past. He loves Daisy so much no matter what it cost, she wants Daisy back to his life.

In a particular scene where Jay Gatsby left home to join the military and find his way to become a wealthy guy. no other woman is in her heart but Daisy. Jay Gatsby shows us how hopeful he is to get back his love, after five long years. He shows us his desire to have a better life, that even he abandoned his own parents to get what he desires. Sometimes our own desire can lead us to the wrong decision, we should be contented of what we have in our life. It is not important to impress someone of what we have, the important thing is that we are happy and contended to the situation we have.

​In conclusion, though Daisy and Gatsby come from a different background. But they have the same expectation, which they desire to have a great future. The Experiences of the main characters are reflected in the theme: “Love and Desire”. Through Love and Desire of the main character to have a great and better future life, makes them obsessive to achieve that goal. But instead of having that the film thought us that we need to learn to appreciate the present, rather than obsess on how great the future will be. And no matter what class we come from, it is always possible for us to achieve success.

Love and Desire in The Great Gatsby. (2020, Oct 01). Retrieved from https://studymoose.com/love-and-desire-in-the-great-gatsby-essay 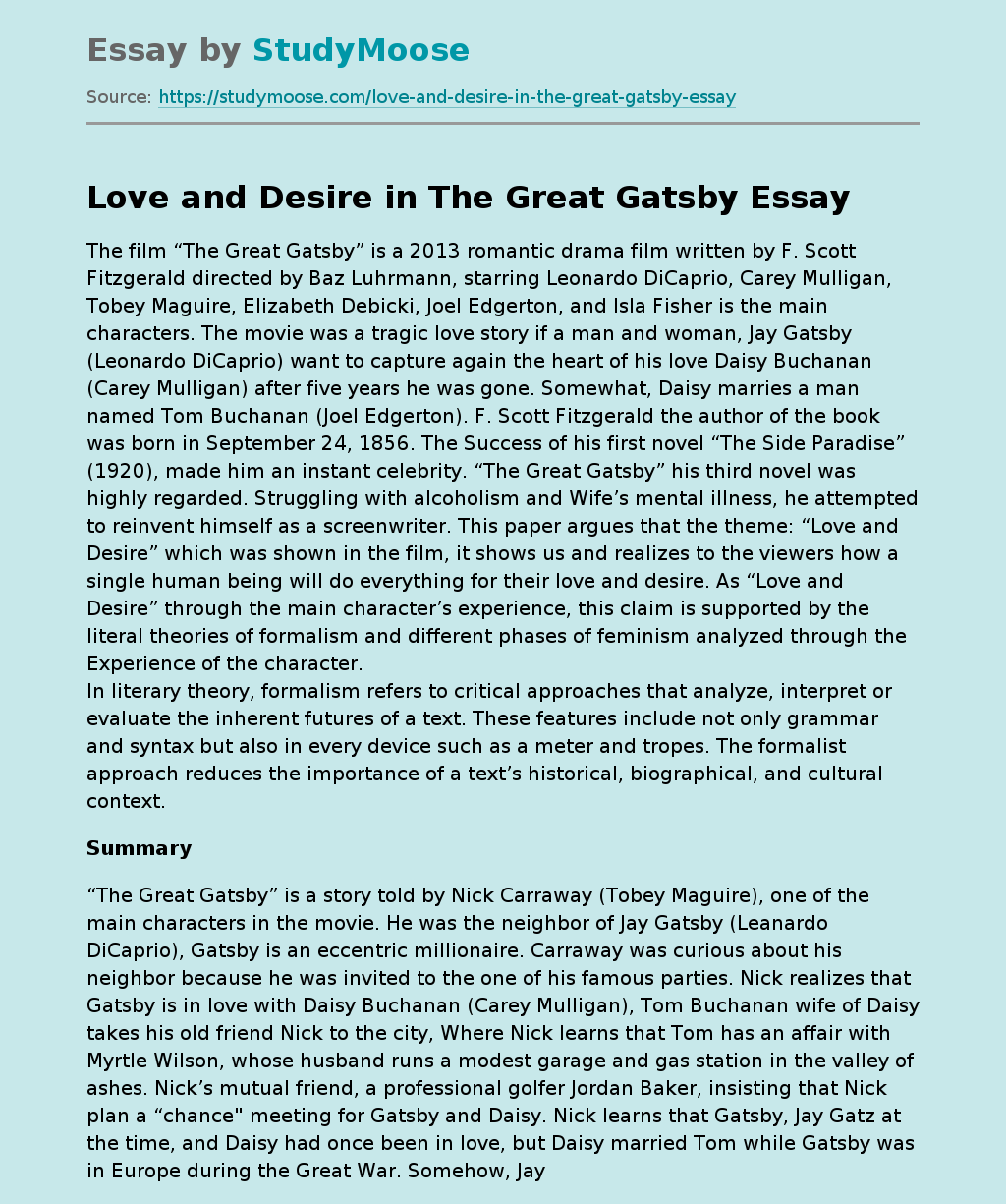