Lost in the Desert

Question 1. Given the conditions, what should Henry do to try to save Mark? He must decide very quickly. Mark has very little time left and may not survive the trip by helicopter to the hospital. What has caused Mark’s weakness, nausea, disorientation, headache, and low blood pressure? Why isn’t he sweating? Henry can do two things to immediately help Mark and his current physical condition. First, Henry should put clothing on Mark. Although Mark may feel very hot, his skin has already been exposed to the intense UV sunrays for an extended period of time.

Don't use plagiarized sources. Get your custom essay on
“ Lost in the Desert ”
Get custom paper
NEW! smart matching with writer

Continual exposure to these rays will worsen the severity of Mark’s sunburns.

Henry should also start administering Mark diluted fluids that contain essential electrolytes, which to help restore hydration to Mark’s body without running the risk of his plasma becoming hypotonic from water intoxication. Mark has lost a lot of water through sweat and this combined with the intense heat of the sun has caused Mark to have heat stroke.

The heat stroke and profound water loss is causing Mark to feel weak, nauseous, disoriented, have low blood pressure, and a headache. Water loss will especially have a large effect on Mark’s physical state because it will directly affect the blood pressure in his blood vessels due to water leaving the cells.

Extreme water loss is also evident due to Mark’s lack of visible sweat. Hyperthermia has caused Mark’s heat loss process to become ineffective. In the extreme heat conditions, the heat stroke causes the skin to become hot and dry.

Mark’s dehydration and heat stroke made it so that his body cannot produce sweat. (Mario)

Question 2. Why didn’t the paramedic give Mark bottled water or distilled water rather than an electrolyte/glucose solution and what is an isotonic solution? In isotonic solutions, cells will be able to maintain their shape and size. This is due to the ability of water to move into and out of the cell when in this environment because the solution and solute concentration is at an equilibrium.

The paramedic administered Mark the electrolyte/glucose solution to help replace essential substances that Mark may have lost due to sweating or from being exposed to the harsh elements of the dessert. If Henry, the paramedic, were to give Mark a drink that was lacking the proper ratio of electrolytes/glucose to water, he could risk exposing the cells in the body to a hypotonic state, in which the cells would burst, or a hypertonic solution in which the cells would lose even more fluid. (Mario)

Question 3. Why DID Mark become disoriented? How would you test your ideas to see if you are right? What does your group think based on the information in the text? Mark became disoriented because he was experiencing heat stroke. To see if I was right I would research the symptoms of heat stroke, and see if Mark had any of the symptoms. (Kassie)

Question 4. What should Mark be concerned with regarding these moles? He talked to dermatologist, Dr. Charles Culp about the moles. What test might Dr.Culp conduct after removing the moles?

Mark should be concerned that he has developed melanoma from his exposure to the sun without wearing sunscreen. If the dermatologist can tell for sure that the mole contains melanoma cells, special tests may be done to confirm their diagnosis. These tests that can be performed are called immunohistochemistry, fluorescence in situ hybridization, and comparative genomic hybridization. (Kassie)

Question 1. Define the terms in the case study highlighted in boldface. Heat stroke is the condition in which the skin becomes hot and dry as the body temperature continues to rise. Damage may be done too many organs, such as the brain, due to the lack of blood flow. First-degree burn is a burn that affects only the superficial skin/first layer Electrolytes substance that ionizes in a water solution Glucose is a monosaccharide in blood that is the primary source of cellular energy Melanin is dark pigment formed by cells called melanocytes (Kassie)

Question 2. Assuming that Mark lost around 4 liters of water, what percentage of his body water did he lose? Would you expect his urinary volume to decrease or increase during his trek? Please explain your answer.

If Mark, weighing 77 kg (average male weight), were to lose 4 liters of water that would be around 10% of his total body water. In his dehydrated and heat stroke state, Mark’s body would need to conserve water. I would expect Mark’s urinary volume to be decreased because he is dehydrated he isn’t in taking any liquid for him to be voiding out. (Vanessa)

Question 3. Why was Mark’s blood pressure so low? Would his pulse rate decrease or increase? Also why was Mark dizzy and disoriented? Please explain.

Question 4. Assume that Mark had an unopened six-pack of beer in his car. Would it have been a good idea for Mark to bring the beer along in case he got thirsty? Why or why not? Beer is known as a diuretic, which increases a person’s overall urine output. It would have been a bad idea for Mark to drink an unopened six-pack of beer for many reasons. Because beer isn’t water, it will eventually add to Mark’s dehydration by increasing his sodium levels and his urine output, both of which will make his cells in a furthered hypertonic state. This will also throw off Mark’s electrolyte imbalance, adding to his cell’s hypertonic state. (Vanessa)

Question 5. What vitamin would Mark have in greater amounts in his body after that day and what role does the vitamin play in the body?

After spending an extended period of time in the sun, with no protection from the sun’s UV rays, Mark would have a great amount of vitamin D built up in his body. Vitamin D can be absorbed from dietary supplements or few foods, it is naturally produced when the sun’s UVB rays reacts with cholesterol. Vitamin D’s main role is to promote calcium absorption, as well as aid in bone growth and remodeling. Vitamin D also regulates cell growth, neuromuscular and immune function, and reduces inflammation. (La)

Question 6. What did Mark do that increased his chance of burns and what could he have done differently? Mark took his shirt off as the heat intensity rose throughout the day. This exposed his unprotected skin to the sun’s harsh UVA and UVB rays. Not only was Mark not wearing any protection from the sun, but he also failed to wear sunscreen, which would have helped to shield his skin from the sun’s rays. If Mark had been wearing sunscreen or clothing to protect him from the sun, he may not have gotten such severe burns. (La)

Question 7. Why would Mark’s skin have looked red within the first few hours of his adventure rather than redness developing hours and days later as a result of “sunburn”?

Mark’s skin will appear red within the first few hours of his adventure rather than redness developing hours and days later as a result of sunburn because of blood in the dermal vessels adds color to the skin. When blood well oxygenated, the blood pigment hemoglobin is bright red, making the skin of light-complexioned people appear pinkish. (La)

Lost in the Desert. (2016, May 06). Retrieved from https://studymoose.com/lost-in-the-desert-essay 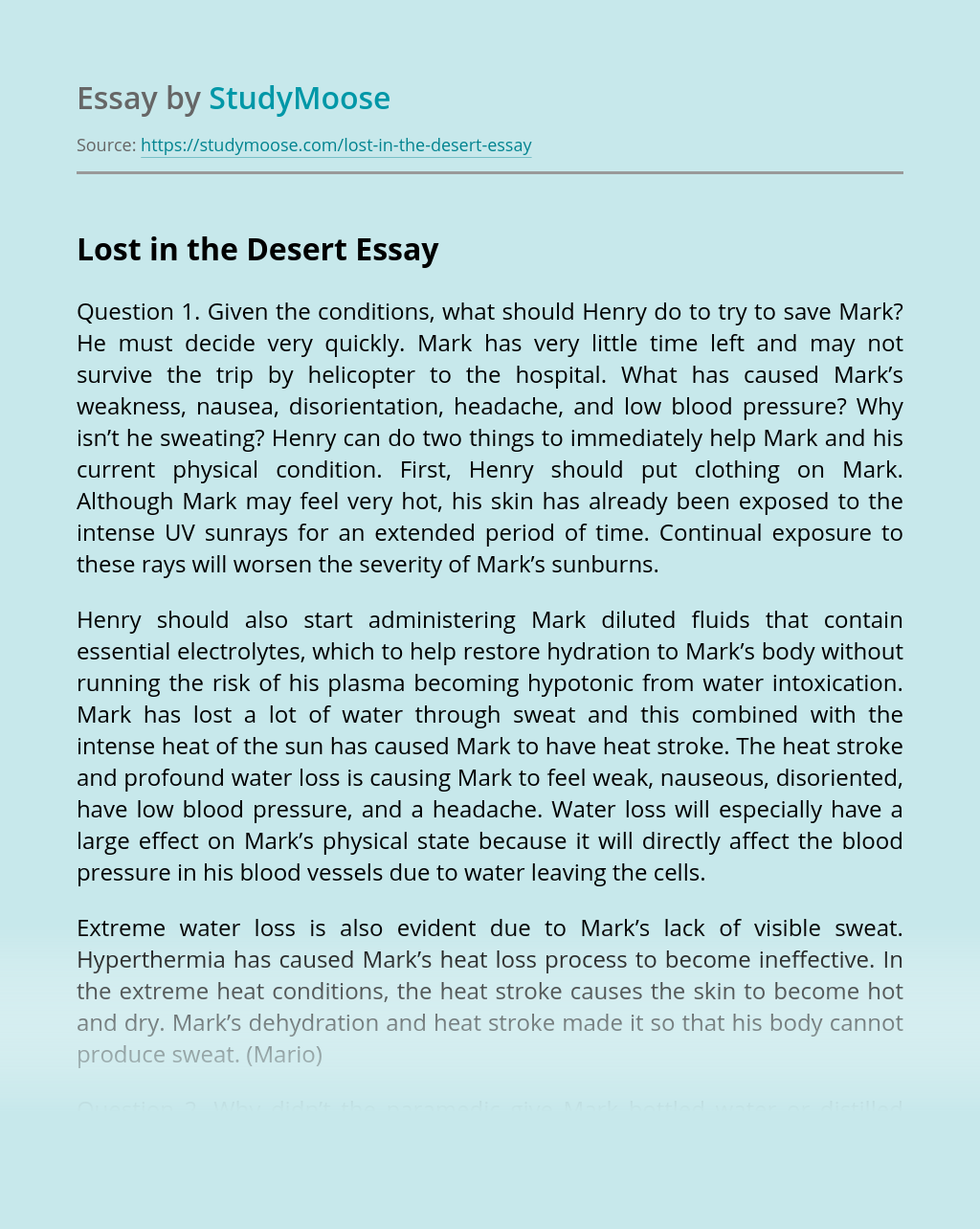