Lord of the Flies- What Is Evil and Where Does It Come from?

Prompt: What is evil and where does it come from? Support your answer with Lord of the Flies and your own example. Two direct quotes needed: one for each body paragraph about Lord of the Flies.

Where does evil come from? Was Lord of the Flies written to answer this question? William Golding wrote this spectacular story in 1954 to illustrate the concept of evil’s existence. The story is about several boys whose plane crashed because of a Soviet missile hit.

Don't use plagiarized sources. Get your custom essay on
“ Lord of the Flies- What Is Evil and Where Does It Come from? ”
Get custom paper
NEW! smart matching with writer

The boys get stranded on an island and have to figure out how to survive. Each boy has his own personality and ideas on how to survive and get rescued. The group of boys start a fire to act as a signal for rescue. Unfortunately, the fire gets out of hand, and the chaos begins.

Because the group of boys was hungry, one of the boys, Jack, decided to kill a pig. This led Jack to abandon his superego and to continue killing.

It seems like the Beast entered Jack and the others, causing in them the thirst for blood. After several events that took place in the story, the boys were finally rescued by a naval officer from the Soviet Union. William Golding wrote this classic to deliver a moral message about the origins of evil. Evil is killing people for excitement and comes from ids within us, according to Lord of the Flies.

William Golding shows that evil is within everyone and does not come from society. When Lord of the Flies/ the Beast gets into Simon’s head, Lord of the Flies says, “ I am part of you” (Golding 142-143).

Evil is speaking directly to Simon’s head and heart. This is an example of Simon’s conscience talking to him and evil trying to turn Simon into a savage like Jack. Society did not make Simon evil, it was the Beast who tried to get Simon to listen and become a savage.

Evil is within everyone yet it is though society, creatures and people that evil is actually seen. “The Beast is harmless and horrible” (Golding 147). The Beast is horrible because it is not content with himself. Ralph is frightened because he thinks Simon’s murder was done on purpose (Golding 157). However, the Beast was not the one who committed Simon’s murder. It was Jack, Ralph, and the other boys on the island who murdered Simon. The Beast is not the one to blame, for Ralph had a choice whether to be a part of Simon’s death. Therefore, the Beast is blameless. Society does not generate evil in people and creatures.

Evil is within us. The Bible clearly states in Genesis 3:3 that sin comes from within. In the book of Genesis, it had the story of Adam and Eve. God clearly said, “You must not eat from the Tree of Knowledge or you (Adam and Eve) will die” (Genesis 3:3). Adam had a choice whether to eat the forbidden fruit on the Tree of Knowledge. He chose to eat it. The serpent known as Satan deceived Adam and Eve and managed to trick them into eating the forbidden fruit. Adam was in control of his own actions. If he had not eaten that fruit, he would not have let sin into this world. Therefore, sin comes from within us.

Evil is the feeling of enjoyment when killing someone or something and comes from our ids within us. The author clearly demonstrates in Lord of the Flies that evil is within everyone and does not come from society. Even though it can seem like society causes people and creatures to be evil, the fact is that evil comes from within every human being. It is clearly explained throughout the Bible the acts of sin are evil. Evil is within all of us whether we are morally corrupted by sin or we are tempted by society. Lord of the Flies definitely illustrated the concept of evil’s existence and that evil is within all of us.

Lord of the Flies- What Is Evil and Where Does It Come from?. (2017, Mar 30). Retrieved from https://studymoose.com/lord-of-the-flies-what-is-evil-and-where-does-it-come-from-essay 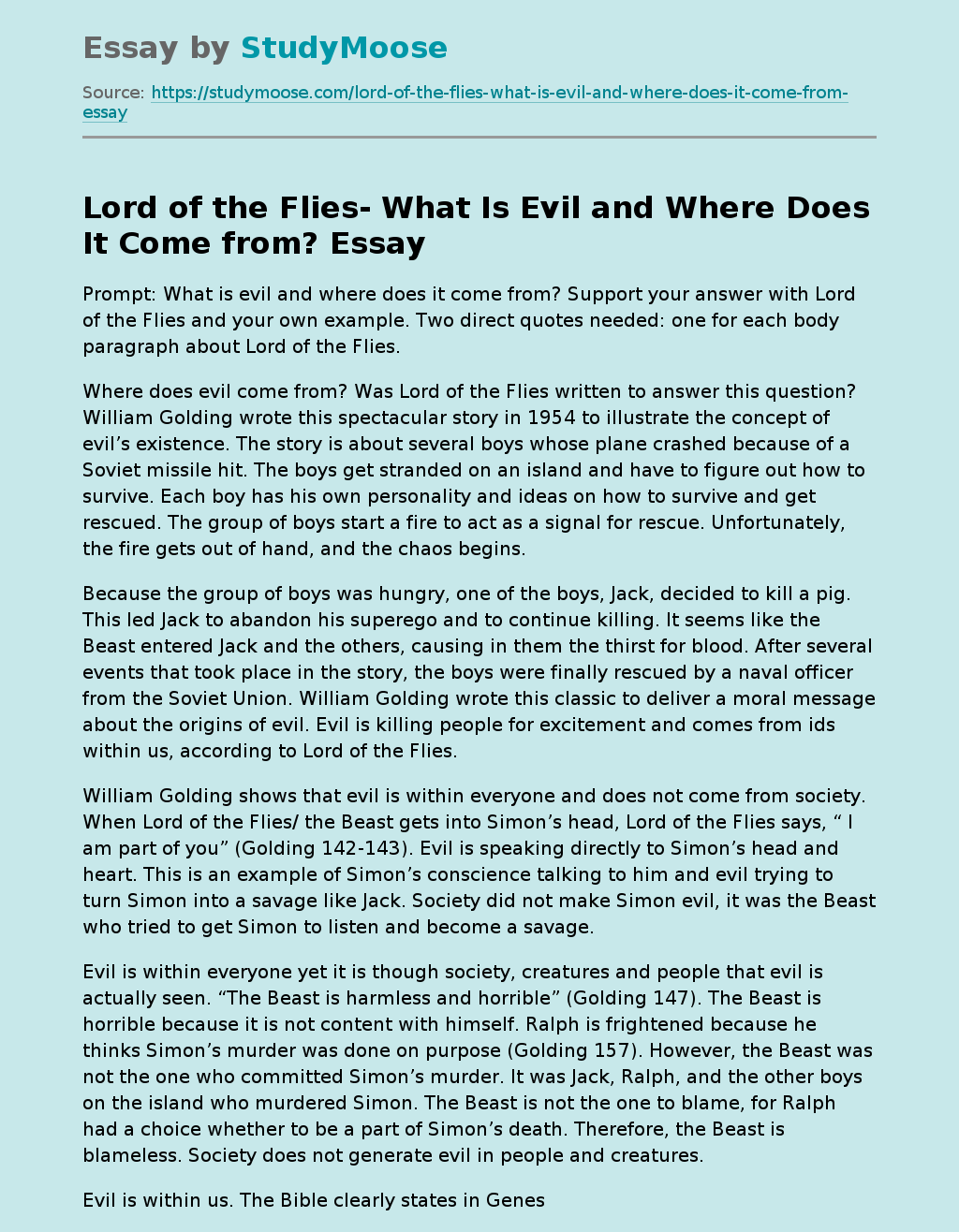