Lord of the Flies Notes by William Golding

A deserted island which is describe as a tropical paradise, and with a scar, a lagoon and a beach. It was shown by the appearance that the island was presented as beautiful as the garden of Eden. On the other hand, evilness and danger were hindered and were shown through different sentence throughout the chapters.

In the middle of a war, a plane with a group of British schoolboys was shot down over a deserted island.

Don't use plagiarized sources. Get your custom essay on
“ Lord of the Flies Notes by William Golding ”
Get custom paper
NEW! smart matching with writer

Two boys, Ralph and Piggy, found a conch shell, and Piggy suggested that it could be used as a horn to call for the other boys. Once all the boys were there, they decided to elect a leader. They chose Ralph as their leader, and Ralph appointed Jack to be in charge of the choir boys who would be hunting for food. Ralph thinks that they must light a fire by using Piggy’s glasses so to attract the attention of passing ships, hoping that someone would see the fire and save them.

The boys succeed in making a fire, but it burned down quickly because no one was watching the fire. Jack thinks that Ralph shouldn’t be the leader and Jack forms a new tribe.

The boys thought that there was a beast in a cave on the island, and none of them dared to go in to find out who or what the beast actually was. Simon was brave, and he found out that the true identity of the beast was actually a dead parachutist.

He planned to run down to the beach to tell the rest of the boys, but he ran into the middle of Jack’s tribe’s gathering and they thought that Simon was the beast. They ended up killing Simon. The next morning, Piggy realized that Jack’s tribe had stolen his glasses, so Ralph and Piggy went to find Jack’s tribe and ask for the glasses back. But they refused and Roger rolled a boulder down a mountain and killed Piggy.

Ralph knew that Jack’s tribe would be finding him, hunting him down. So Jack told his tribe to light the entire forest with fire to scare Ralph out of his hiding place. When Ralph saw the fire, he immediately ran towards the beach and fell down because he was tired. Ralph looked up and saw a British naval officer. Ralph cries in the end because of his loss.

C.The Characters
Ralph
One of the main characters / main protagonist
Elected leader
He was responsible of the well-being of all the other boys in the story He the one and only boy who could still remain civilized and rational at the end of the story
Piggy
The smart one/ the most intelligent one
His glasses is the key to making the fire
Made fun of because of his weight and outlook
The outsider
Was killed by the stone

Roger and Maurice
The hangman of Jack’s tribe
Roger’s Jack’s lieutenant who has a sadistic streak.
Maurice was Roger’s henchman
Kills Piggy

E.Read the Introduction and answer the following questions: 1.How was the novel inspired by Coral Island?

Both stories’ plots are about boys being stranded on a deserted island. In “Coral Island”, the author, R. M. Ballantyne, wrote his perspective of what British boys would do if they were stranded on an island. In the story, the three boys worked together. They built huts, hunted for food and explored the island. They were at first, primitive cast mates, but then evolved into civilized people. “Lord of the Flies” was inspired by the plot and idea of boys being stranded on an island, but William Golding wrote his own perspective of how he thought a group of civilized boys would react to being stranded on a deserted island. The difference is that in “Coral Island”, the boys became civilized people while in “Lord of the Flies”, the civilized boys became “monsters”.

2.Briefly describe the three parts of the novel

For the first part, it’s mainly the background of how the boys got stranded on the island and the election of their leader – Ralph. Ralph thinks that they should start a fire to get the attention of passing ships in order to rescue them from the island. The second part is mainly about Jack forming a tribe against Ralph and them killing Simon because they thought that he was the beast. But actually, Simon knew that the beast was actually a dead soldier, but he was killed because Jack’s tribe thought that he was the beast. The third part is mainly about how Jack’s tribe stole Piggy’s glasses to start the fire and how Roger rolled a boulder down the mountain, killing Piggy. And about how Jack’s tribe tried to kill Ralph by setting fire to the entire forest, but Ralph was rescued by a British Naval officer.

3.Briefly comment on the style in which the novel is written The author wrote the story in a very straight forward style. There weren’t too lengthy descriptions. The characters and objects in the story have symbolic meanings that show us the main theme of the story. This story is based on the author’s real – life experience with the cruelty and brutality of World War II.

Lord of the Flies Notes by William Golding. (2016, Sep 28). Retrieved from https://studymoose.com/lord-of-the-flies-notes-by-william-golding-essay 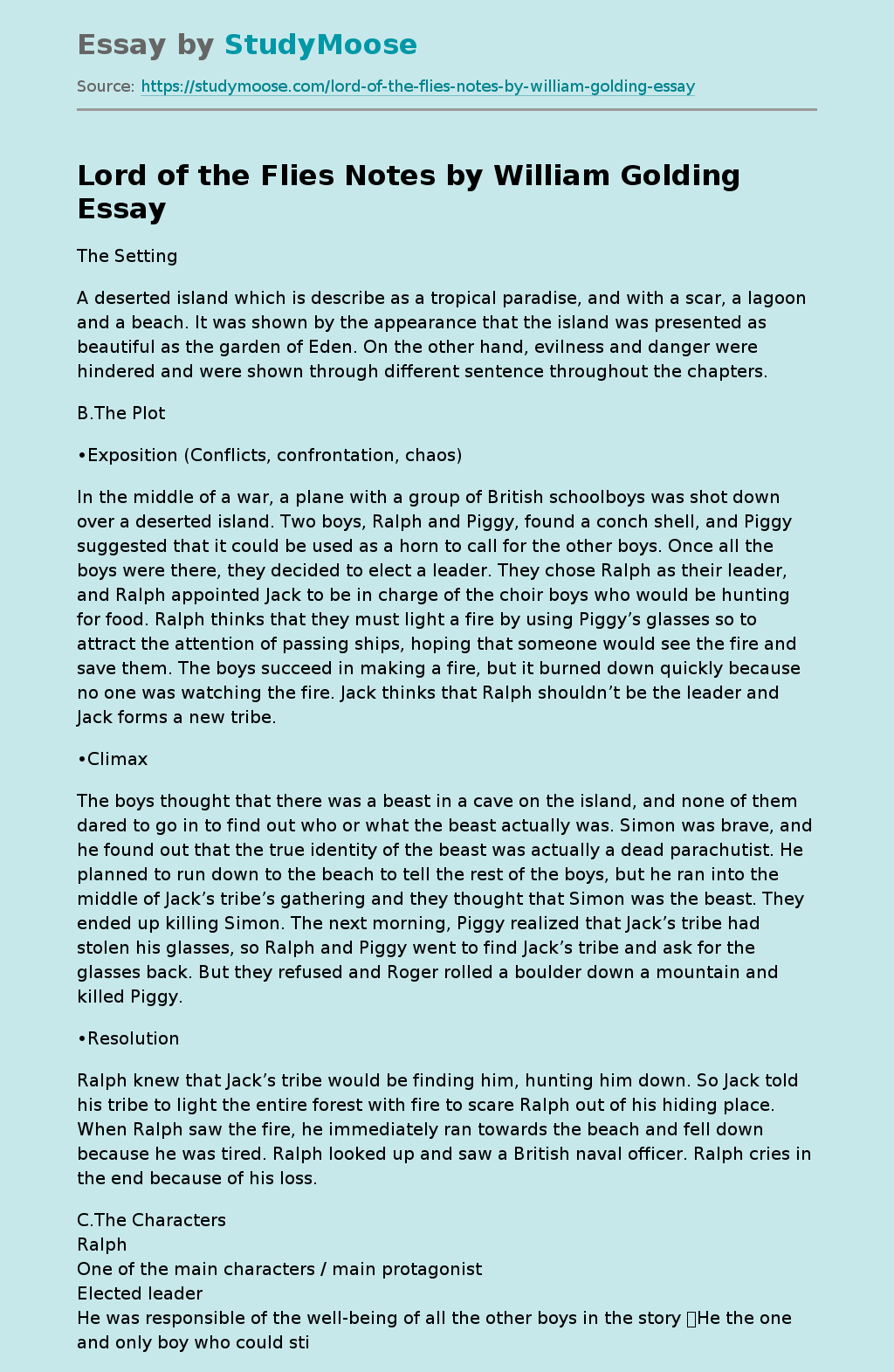