Lord Of the Flies Mood Essay

With close reference to the extract, show how William Golding creates mood and atmosphere here. (10) In this extract, we notice that it is the ending events of the novel. So, we can identify that all chaos and destructive events have taken place; as a result, their impacts upon the characters have taken their toll. In the opening lines of the extract, Golding (straight away) creates a sombre mood towards Ralph, when the officer said ‘How many of you are there’ and Ralph responded by shaking ‘his head.

Don't use plagiarized sources.
Get Your Custom Essay on Lord Of the Flies Mood Just from $13,9/Page

’ What this shows is that Ralph is clearly astonished and mesmerized – as if he had a flashback- by all the misfortune that occurred on the island. He does not reply verbally, but, by the absence of this, Golding creates an additional distressful mood between Ralph and the reader; which in turn creates a sorrowful atmosphere. This atmosphere is prolonged through when we see the description on the appearance of Ralph.

When asked about authority, Ralph says that he is in charge, ‘I am,’ however after this; a sense of visual cleansing effect emerges.

In other words, as a reader, it is like the wool has been taken away from Ralph’s eyes, as he realises who he really is, ‘A little boy,’ with a ‘black cap’ and ‘red hair.’ Next we see that the mood changes into a remorseful one when in this section; Ralph may have been reminded of the withdrawal of an adult figure. Yet, when reminded of piggy through the ‘spectacles’ he ‘changed his mind’ and ‘stood still.’ What I infer from this is that Ralph is reminded from the rational and parent like figure of Piggy: which in turn creates a despairing atmosphere. This atmosphere is maintained throughout the extract. We see next that the officer is quite disappointed as a group of ‘British Boys’ would have put on a ‘better show.’ This disappointed mood, created by Golding, is inserted to show the escalation of violence and change that has commenced on the island. Also, the removal of law and justice in which the British are popularised to uphold.

Ralph himself realises this and through his response, we see his how this was to be, but later, this ‘British society’ had fallen out of hand. ‘It was like that at first,’ ‘we were together then.’ Golding shows this disappointed atmosphere through Ralph’s unfinished sentences. In the last two paragraphs, realisation, of their surroundings, between all the characters have been distinguished. This atmosphere is seen as the island was once a ‘strange glamour,’ now its ‘scorched up.’ Furthermore, with the deaths of Simon, and ‘jack had…’ killed Piggy, tears and sobbing took them all. In this, we see that there are contrasts to the father and child theme. We see this by the words ‘filthy body’ and ‘unwiped nose’ which can relate to childish features. As a result, this creates a heartfelt mood towards the characters. In the ending, we see that the officer looks at the trim cruiser in the distance. Why Golding created this is possibly (in my speculation) as a new leaf/page, a symbol for freedom, in turn, creates a positive atmosphere.

Lord Of the Flies Mood. (2016, Mar 17). Retrieved from https://studymoose.com/lord-of-the-flies-mood-essay 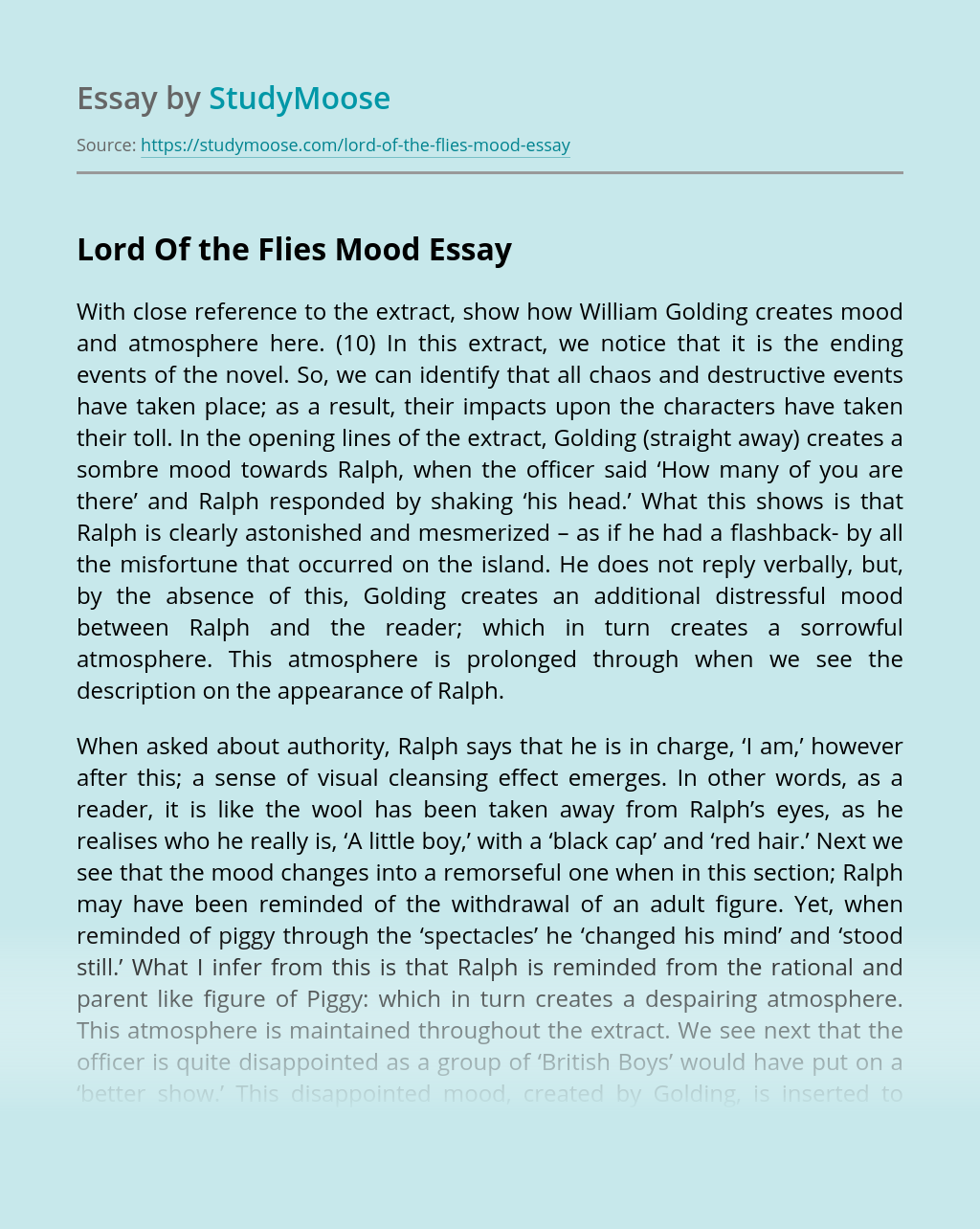