Lord of the Flies Chaos vs Order

The conflict between two competing impulses that exist within all human beings: the instinct to live by rules, act peacefully, follow moral commands, and value the good of the group against the instinct to gratify one’s immediate desires, act violently to obtain supremacy over others, and enforce one’s will. This conflict might be expressed in a number of ways: civilization vs. savagery, order vs. chaos, reason vs. impulse, law vs. anarchy, or the broader heading of good vs. evil. Throughout the novel, Golding associates the instinct of civilization with good and the instinct of savagery with evil.

Topic sentence isputed leadership and infighting between the two dominate powers (Jack and Ralph) cause a disputed leading to the separation of the tribe into two separate tribes each determined to destroy and ruin the other showing how government (power) can deteriorate to nothing if the following “citizens” don’t go along with the ruling power they started out with a good governing system based mostly off of a dictator ship but allowing some voting as in democracy this lead to the group working together to build houses, gather food, create weapons and finally set up fires for both cooking and signaling a passing ship.

This system worked for the majority of the book allowing the children to solve their problems as a group effort with all contributing to what they could. The evidence showing this is as follows, when they first landed on the island the idea of government was first brought up by the conch shell which symbolized power and eventually lead to the election of a leader (Ralph), leading to the children coming together and working towards survival and hopefully their salvation this as we know failed as the tribe split in two and became democratic and dictatorship ased with Ralph as the democratic leader and Jack as the Dictatorships leader.

Ralph and Piggy discover the conch shell on the beach at the start of the novel and use it to summon the boys together after the crash separates them. Used in this capacity, the conch shell becomes a powerful symbol of civilization and order in the novel. The shell effectively governs the boys’ meetings, for the boy who holds the shell holds the right to speak. In this regard, the shell is more than a symbol—it is an actual vessel of political legitimacy and democratic power.

As the island civilization erodes and the boys descend into savagery, the conch shell loses its power and influence among them. Ralph clutches the shell desperately when he talks about his role in murdering Simon. Later, the other boys ignore Ralph and throw stones at him when he attempts to blow the conch in Jack’s camp. The boulder that Roger rolls onto Piggy also crushes the conch shell, signifying the demise of the civilized instinct among almost all the boys on the island. Now on to the dictatorship Jack set up with his symbol The sow’s head is a symbol of savagery and destruction.

The boy who introduced the idea of the sow’s head on a stick was Jack, and Jack too is a symbol in the book. Jack stands for savagery. You know right from the start of the novel the Jack is not like the other boys, and that he’s a savage because of what he tells Ralph that he wants him and his choir to be. When asked what he would like to do on the island he replies “Hunters” showing he only cares for killing and wants to be the only provider on the island this then gives Jack the theoretical power he wanted from the start (the leadership of the tribe)

Simon is different than the other boys, so that might by why the sow’s head is different for him. When the other boys are fighting, Simon goes to his private glade in the forest. The thing that gave me the idea that the sow’s head represents something different to Simon is because Simon has a conversation with it. Also because the conversation sounds like something that would’ve came out of Simon’s head, because Simon never really believed in a beast on the island and after learning the truth sets off to tell the others ultimately leading to his own demise as the boys mistake him for “the beast” and kill him during a ritual.

Lord of the Flies Chaos vs Order. (2016, Oct 30). Retrieved from https://studymoose.com/lord-of-the-flies-chaos-vs-order-essay 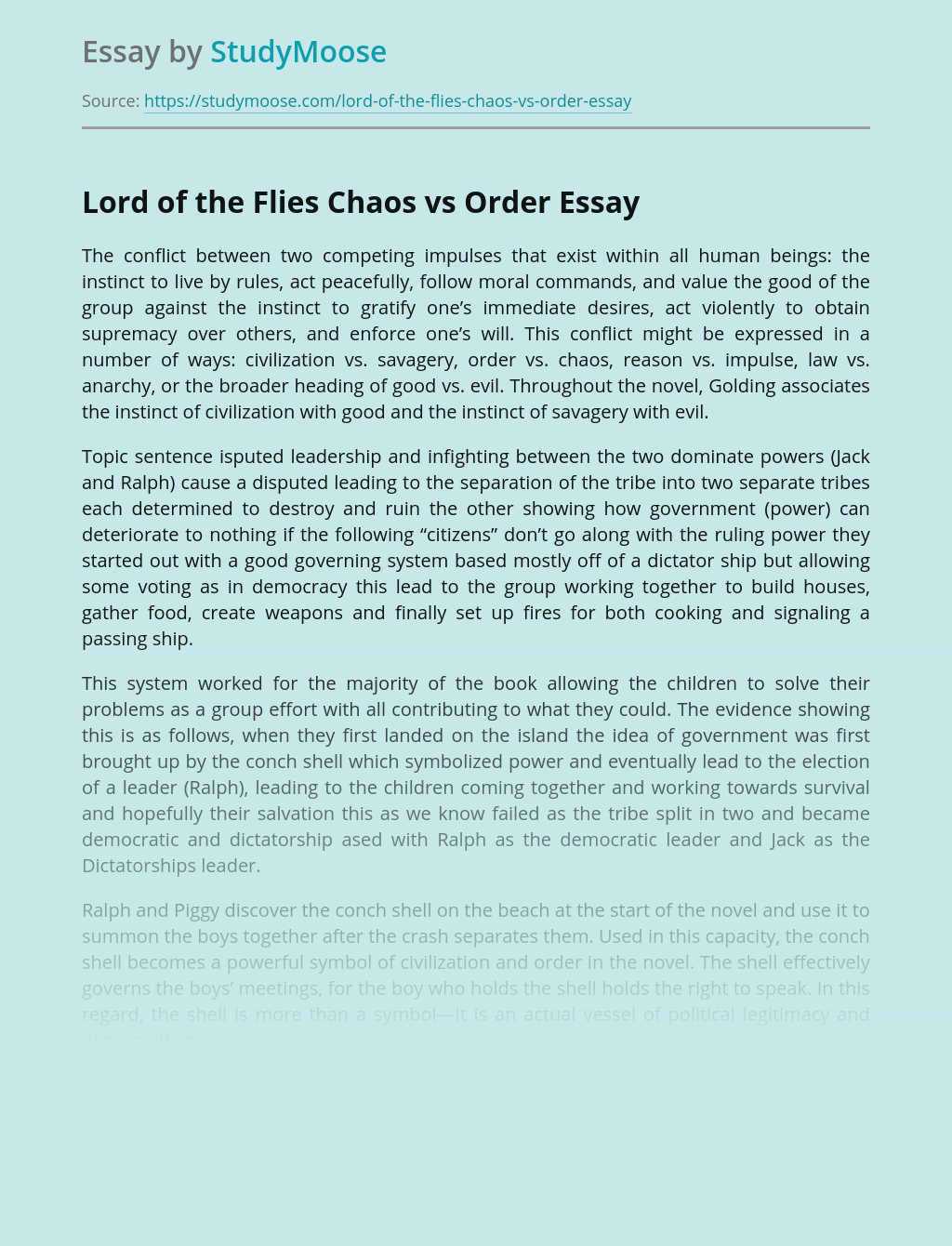 Introduction Given the subject matter of this essay revolves around bureaucracy, and given that bureaucracy is concerned with rules and order, it seems fitting to first begin with an official definition of the term; “A system of government in which most of the important decisions are made by state officials rather than by elected representatives;...

Stripped of Shakespeare’s poetic style and skilful characterization, Macbeth is revealed as little more than a petty tyrant. Like Machiavelli’s Prince, Macbeth seeks power as an end in itself and sees any means as justified provided it helps him achieve his goal. It is a standard image of power: an individual, or small group, occupying...

Get Essay
"Lord of the Flies": Why Ralph is the Best Leader

In Lord of the Flies, when a group of young boys are stranded on an island and left their own devices, a leader must be chosen. What separates a good leader is someone who cares for the greater good of the group and their well being rather than just caring about themselves. Some of the...

Quotations Describing Ralph from "Lord of the Flies"

“And another thing. We can’t have everybody talking at once. We’ll have to have ‘Hands up’ like at school…Then I’ll give them the conch…He can hold it when he’s speaking…And he won’t be interrupted. Except by me.” (pg. 31) – This quotation proves a lot about Ralph and his character. It proves that Ralph demands...

Lord of the Flies - Break Down of Society

Civilization is the key to keeping society in order. If many individuals lose this civilized state, the society they are in begins to break down. Ralph, Simon, and Jack are the major problems with the breakdown of their society. Anything done in a community, whether it is multiple actions or nothing at all, can change...

The Promise of Protection Under His Authority

In his book Under Cover: The Promise of Protection Under His Authority, John Bevere advocates the notion that under an authority which is divinely established, there exists a secret place made of protection, liberty and provision intended for the people of God. 1 Bevere shares personal examples of why rebelling against divine authority becomes the...

Truth Danforth is a very authoritative character throughout the play and is often the one to regain order in times of chaos. He is a key character in the play, used by Miller to engage the audience. As he begins to believe Mary Warren that it was all lies, it gives the audience hope, and...

Influence is a fundamental aspect of life in organization and it is unlikely that organizations could function at all without it. Almost all organizational members engage or attempt in influencing others and virtually everyone in any organization is subject to the influence of others. This assertion holds true for every type of organization, whether large...