"Look, Stranger, at this Island Now" by W.H. Auden

This poem us a “musical” exercise in which the poet reveals his technical skill by using sound techniques and figurative language to reinforce his description of a scene. It is one of Auden’s few poems of natural description, perhaps of the coast in the West Country of England.

The first stanza requires the stranger – someone unfamiliar with the island of kingdom of Britain but perhaps acquainted with the stereotype of it as a dull and gloomy place – to look at, and re-examine his prejudice about, Britain, as it is revealed (“discovered”) for his enjoyment by the sunlight dancing and flickering on the waves of the sea.

Don't use plagiarized sources. Get your custom essay on
“ “Look, Stranger, at this Island Now” by W.H. Auden ”
Get custom paper
NEW! smart matching with writer

The alliteration and consonance of -l- sounds (leaping, light, delight) and of the dental -t- and -d- sounds (light, delight, discovers) in the second line, and the variation of long vowel sounds in “leaping” and “light”, together with the repetition of “light”, creates a quick dancing effect which mimics the reflection of sunlight off waves.

In two more commands the narrator requires the stranger to stand and remain quiet so that he can hear the sound of the sea, varying in volume, perhaps according to the fixity required, while the pattern of stresses on “wander” and “river”, in the penultimate line, and on “swaying sound of the sea”, in the last line, combined with the sibilance, conveys an idea of the changing volume of sound coming from the sea, and the continued whispering sound that it makes.

The second stanza invites the stranger to wait at the point where a small field ends in a chalk cliff, which drops to a shingle beach below.

The waves surge up the beach until they are halted by the cliff. The assonance of the long -au- vowel sound in “small” and “pause” in the first line, which concludes with the command to pause, gives the impression of something long ending suddenly, which creates a feeling of suspense and uncertainty as to what comes next and suggests the ending of the land and the beginning of the air. The same assonance in “chalk”, “walls”, “falls” and “tall” creates the same sense of extension but its quick repetition in “chalk wall falls” conveys the notion of a rapid or sheer drop, the alliteration of -f- conveying the notion of air bubbling up in foam.

The onomatopoeic “pluck” and “knock” vividly conveys the dragging and pounding effect of the waves on the shingle and the cliff, the sturdy defiance of the last-named being suggested in the metaphor “oppose”. The metaphor and onomatopoeia in “scrambles”, with its clutter of consonants, again vividly conveys the quick sliding descent of the shingle down the beach, the sibilance re-creating the sound it makes, while the metaphor in “sucking”, together with the break in the word, gives some idea of the powerful pulling action of the ebbing waves. Again, the description of the gull and the placing of “lodges” at the end of the line creates a sense of suspension which emphasizes the difficulty of maintaining a perch on the wave and hints at the brevity of the stay.

The third stanza takes us further out to sea and describes the ships which leave the port (“diverge”), and which seem, because of their diminutive size, as small as seeds. The simile “like floating seeds” suggests they are bearing new life. They are so far away that they do not seem to be controlled by men (“voluntary”) though they are on “errands” (which diminishes the importance of their journeys) which are “urgent” (these words imply that those who direct these vessels have an exaggerated idea of the importance or value of these journeys). The rhyming of “diverge” and “urgent” creates a sense of the ploughing movement of the ship as it passes through the water.

The last four lines of this stanza return to the start of the poem and suggest that the whole scene may continue to live in the memory of the observer, passing as silently and casually and beautifully as the clouds reflected in the water of the harbour pass, like people strolling at leisure. Here, the alliteration and consonance of the soft -m- sounds in “memory”, “mirror” and “summer”, and the half-rhymes of “mirror” “summer” and “saunter” all convey a sense of gentle and relaxed ease, appropriate for scenes which are recalled in moments of leisure.

The poem, then, invites the stranger to see for himself the beauty of this island at this special moment in time. Although it suggests a need to re-examine old prejudices about the island kingdom, it also functions as a celebration of the senses of sight and hearing which are used in observing the scene and in re-living the experience.

It is written in three stanzas of seven lines. The rhyme scheme of the first stanza is abcdcbd. The line lengths are varied effectively, to suggest changes in the movement of waves or in the duration of a sound or a feeling. Run-on or end-stopped likes are used effectively to convey similar ideas or impressions.

"Look, Stranger, at this Island Now" by W.H. Auden. (2016, Jul 22). Retrieved from https://studymoose.com/look-stranger-at-this-island-now-by-w-h-auden-essay 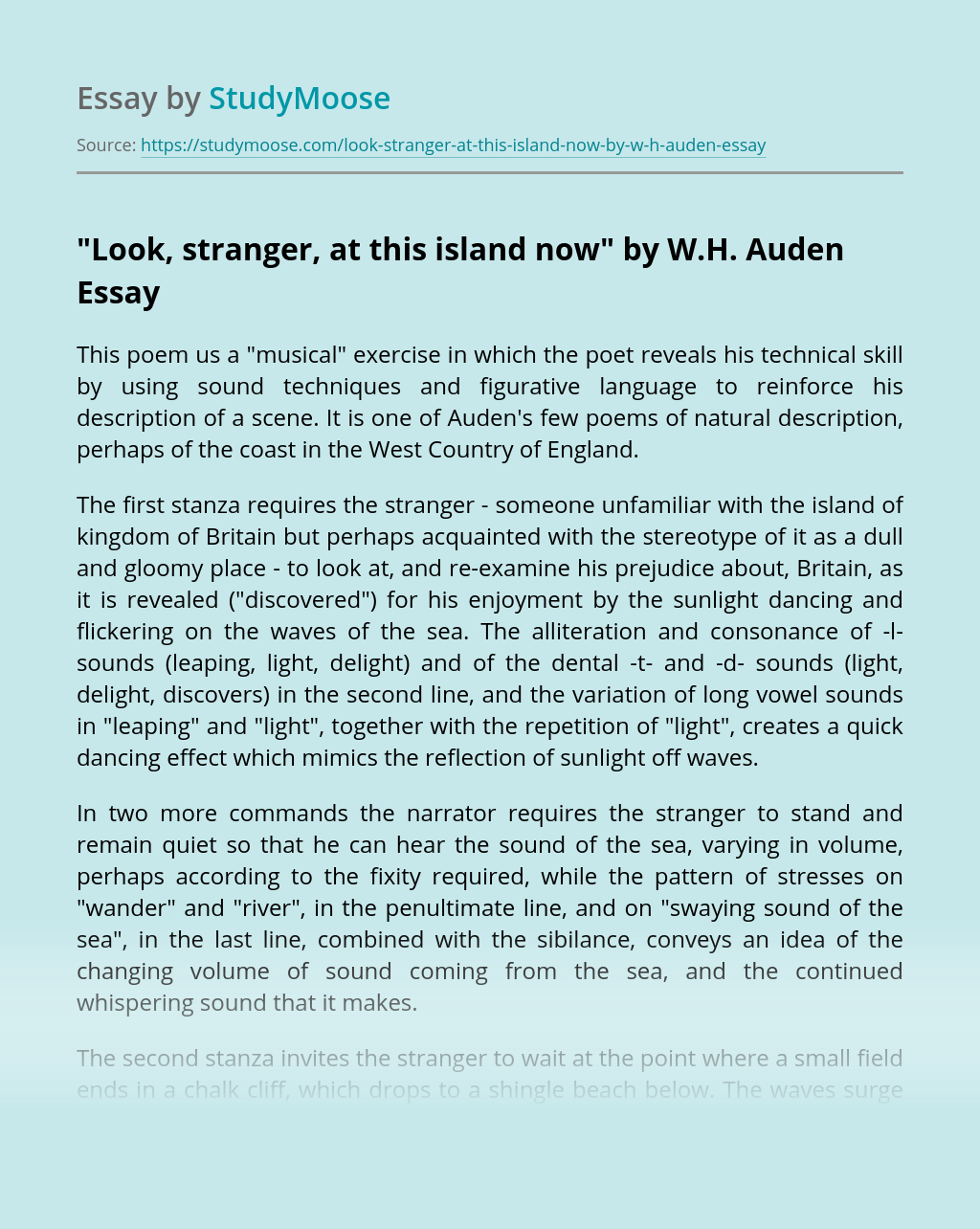