The film “Lone Star” is a murder mystery film based in Frontera, Texas which is a multicultural border town. The significance of the conclusion of “Lone Star” is based off of several contexts presented throughout the film. The portrayed contexts of the film have to do with relationships and conflicts between races, social classes and power struggle within a community and the border between Mexico and Texas. These contexts place significance throughout the film as a murder mystery is sort of a background to all the events and conflicts that take place.

Don't use plagiarized sources. Get your custom essay on
“ “Lone Star”-Borderlands America ”
Get custom paper
NEW! smart matching with writer

The phrase “Forget the Alamo” is an idea that is depicted throughout the film. The phrase refers back to the time when Texas was trying to gain independence from Mexico and also deals with a great conflict and broken promises between the Anglos and Mexicans. This idea significantly deals with conflicts between the borders. The phrase is meant to say that they should forget the border war and racial conflict.

We even see the border issue between Mercedes Cruz who is a Mexican restaurant owner and a Mexican immigrant herself. She will make rude remarks to the Mexican “illegal aliens” as she presumes them to be. And to other fellow Mexican Americans, if they speak their language she will stop them and tell them to speak in English because they are “in America”. And she will even call the border control on other Mexicans she finds trying to sneak into the border town.

The concept of cross-cultural relationships is shown in the film by the relationship between Pilar and Sam. Pilar is a Mexican-American school teacher and Sam is an Anglo police officer of Frontera. They had a past relationship when they were younger and in the film find a recent renewed romance between each other. This idea also contributes to the conflicts between races. There is some conflict between Anglos and Mexican-Americans. There is some hostility between them that we see in the film when we look at Pilar’s mother, Mercedes, and between Sam. She has not liked the idea of her daughter being with a “white” man even back when they were teenagers and
still in their renewed romance as they are older. Another reason of her disapproval deals with a surprise later found that Pilar and Sam are half brother and sister.

We also see the racial conflict with the questioned morale police officer, Charley Wade. While he was a police officer he was a tyrant to Mexicans and African Americans and would do whatever he can to make them afraid of him, to show whose boss since he was an Anglo. He harassed Otis’ who was an African American who owned a bar that was popular among African Americans. He also shot a Mexican man he knew was smuggling immigrants across the border. And also at the end of the film, he attempted to unjustly kill Otis. His character just showed racial prejudice and abuse of his positional power as a police officer.

Another concept from the film is the conflict between the social classes within the community. This concept is portrayed in the film by the political election approaching and the involvement the Mayor Hollis Pogue in the murder mystery years ago. He struggles with dealing with his social and political status and possible loss of power as Mayor in the truth that he is the one who killed Charley Wade.

There is also a part of the film that shows the class struggle as the talk of building a new jail as it is an issue of the upcoming sheriff election which is between Sam and a fellow Mexican colleague. And also from the issue about the school curriculum and the debate about which one teaches the “real” history of the area which one place the right race as the “good guys”. The teachers debate about this as they know they live in a community with different cultures, race, and classes.

In the film “Lone Star” we see a struggle between the contexts of race, class, power struggle and border wars presented throughout the film. Although the murder mystery is the main plot of the film, these issues are really what the film is about.

The film shows the cultural and racial struggles in the relationships between Otis and other African-Americans and Mexicans against Charley Wade, Mercedes and Sam, Sam and Pilar, and Mercedes and “illegal aliens”. Whatever race or culture they may be, they have to deal with multicultural issues whether it may be against their own race or another race. Some deal with it in prejudice ways and some have the “forget the Alamo” mindset.

“Lone Star” opens its viewers to the sometimes “hidden” issues that are often unforeseen in border towns. It shows the cultural, racial, power, class struggles and conflict present in border towns. It also shows the hardship that the community and people of the community deal with, not only with each other but also within themselves and identifying who they really are and trying to be multicultural and dealing with people of different race and cultures. 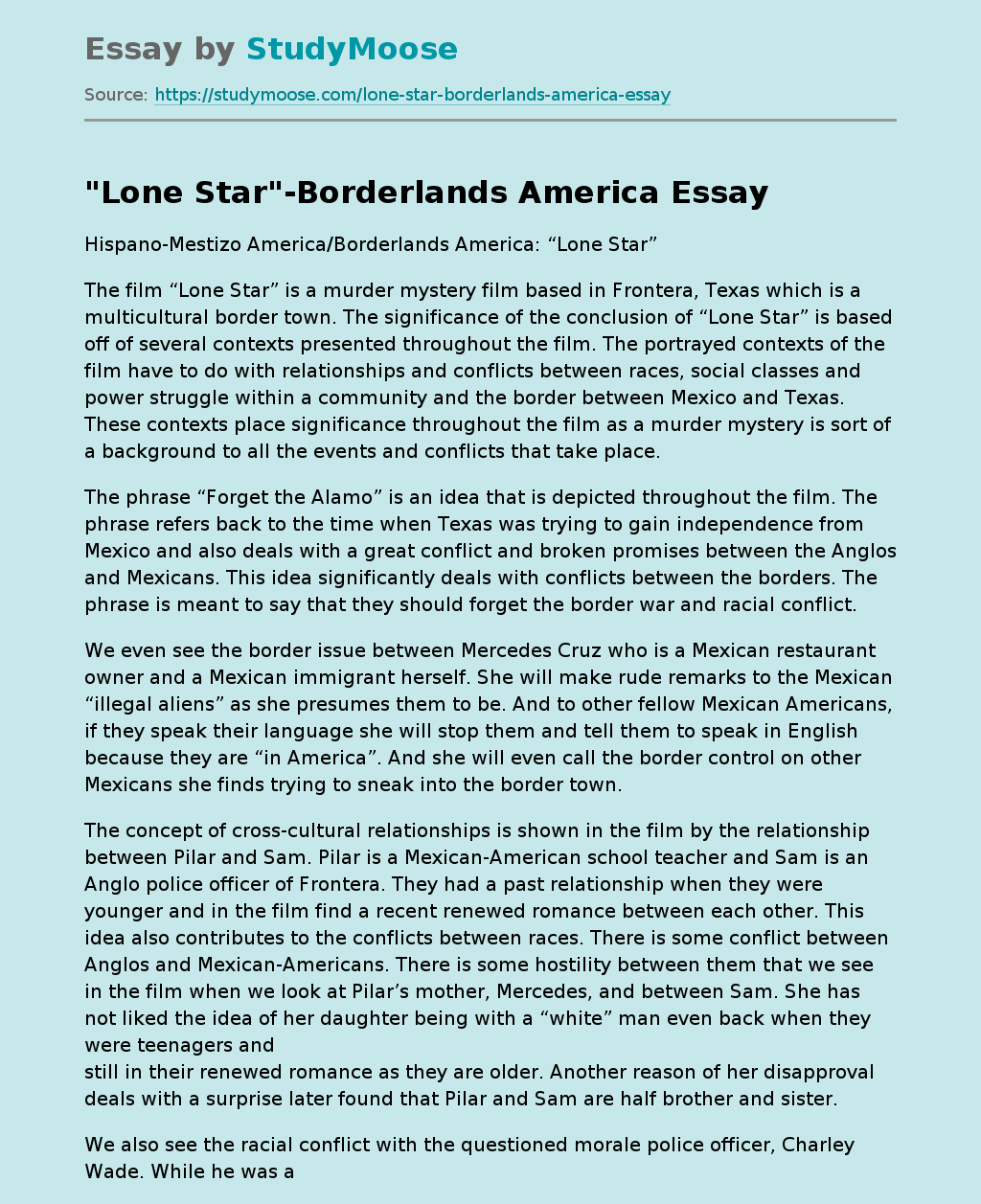