Living on Another Planet

For my professional organization I chose NASA because they are the U. S. government agency that is spearheading the Kepler Project that actually found the planet Kepler 22b that so closely resembles Earth.

NASA was founded in 1958 and their headquarters are located in Washington D.C. NASA’s mission statement is “To reach for new heights and reveal the unknown so that what we do and learn will benefit all humankind.” (Wilson, 2011)

Don't use plagiarized sources. Get your custom essay on
“ Living on Another Planet ”
Get custom paper
NEW! smart matching with writer

NASA not only accomplished great things in flight and space exploration, but also made many scientific discoveries and developed many technologies that we use today. One such technology would be formed from the research and findings of Dr. Dennis Morrison on nanomaterial (Jones, 2011). The information learned from his research helped Farouk Systems, Inc. develop the special coating on their ceramic plates of their hairstyling tools (Jones, 2011). One of the most popular of which is the CHI hairstyling iron.

The planet I chose to live on is Kepler 22b.

The purpose for living on this planet is to see if it is a viable solution to living on earth in the eventuality that earth becomes uninhabitable.  Kepler 22b is located in the Kepler 22 star system 600 light years away (Culler, 2011). It is located in the “habitable zone” in said star system. Kepler 22b is 2.4 times the radius of earth (Culler, 2011). Its host star (like our sun) is a G-type except smaller and cooler (Kepler 22b The New Frontier, 2011). The orbit of the planet to its star is similar to earths at 290 days (Culler, 2011). Not much is known yet of the composition of Kepler 22b, but it is theorized that it is made of rock and can support surface water.

The climate on Kepler 22b is a very comfortable average temperature of 72 degrees Fahrenheit. This cooler temperature is because the sun type G star is cooler and smaller than earth’s sun.  The population size on planet Kepler 22b is 0 at the moment as no life forms have as yet been discovered on said planet. For my colonization, I would suggest a community of at least 10,000 people so as to support all facets of the operations and stabilization of the community.

The impact on the social structure of the community would be a positive one. It would be a community where everyone could come together with a single purpose and goal in mind to achieve, regardless of race, sex, or economic status. The economic impact would be positive as well by creating thousands of jobs in all sectors of society from the start to finish of the project.

This community will be built near the equator of Kepler 22b. I have chosen this location due to the average temperature on this planet is 72 degrees Fahrenheit (Culler, 2011), so this location will be the most temperate and tropical location to settle in and plant crops. A tropical location will allow us the best chances to take advantage of rainfall and sunshine for crop growth, water, soil fertility, our livestock we use for food, and the general comfort of our community.

The population size of the community will be 10,000 people. The reason for this number of people is to ensure enough man power to build the community and keep it operationally sound once it is finished.

The economic structure of this community will be communal as this is an experimental colony to see if life on another planet is feasible. No one pays for anything as everything will be provided by our earth government and rationed out equally per person until everything is up and running properly. Everyone will have a job to do that they are solely responsible for and each job depends on the next person and what job they are responsible for and so forth.

What will be needed for survival:

10,000 female dairy cattle
20,000 beef cattle
20,000 pigs
40,000 chicken
Fishing supplies
DNA of all livestock brought with us for cloning of food supply
Enough grains for 2 years
Freeze dried fruits and vegetables
DNA of all grains, fruits, and vegetables for cloning
Seeds to plant all grains, fruits, and vegetables
Feed for all of the livestock for at least 1 year
Building tools
Building supplies (concrete, doors, steel girters, nails, cables and wiring, etc.)
Building machinery and equipment
Solar panels
Windmills
Water purification supplies and technology
Drilling equipment
Batteries
Clothing
Cooking utensils such as pots and skillets (enough for every person to have 3 sets each)
Personal hygiene items such as deodorant, shampoo, toothbrush, toothpaste (enough for a 2 year supply for each person)
One set each per household- couch, chair, coffee table, dining room table and chairs, bed for each person, dresser for each person, mirror
Supply of fresh water for 6 months

The reason Kepler 22b was chosen was due to its close resemblance of earth by way of composition of its atmosphere, land masses, and bodies of water, as well as its approximation to its own sun (Kepler 22b The New Frontier, 2011). The specific location on this planet’s equator was chosen because it offers the most temperate location for the people to live as well as it being tropical so that we may take full advantage of the rainfall and/ or sunshine for our crops, livestock, and personal water supplies.

Some supplies will be naturally available on Kepler 22b, such as water, air, natural gases, rock, sand, trees, and edible aquatic life. There will be a considerable amount of supplies that will be brought from earth so as to get us started, but we will have to cultivate our own for future use, such as
crops, food, drill for water and natural gases.

Since this is a temperate climate of 72 degrees (Culler, 2011), there will be little impact on energy use for air conditioning. At night there will most likely be a larger impact on the use of energy for heating and lights. The political structure will be set up and in place on earth before we ever leave so that it will be in place when we arrive on the new planet. The people chosen to be in a position of power over the others will not have absolute power and that will not be their only job. The people in power will also have a regular job in the building of the community.

Everything in this community will be decided by a majority rules vote. The laws will be set and in place before they ever leave earth. They will be the same as on earth with one exception. If you break a law in this community, no matter how small, you will be exiled back to earth. You will never again be allowed back into this community and someone else will be sent from earth to replace you. The layout of our community can be rationalized in the following ways: * It is very basic for optimal functionality

To see if we can work cooperatively as a whole instead of individuals The transportation systems that will be used will be walking and/or teleportation. This decision was made to keep emissions from any type of vehicle polluting the atmosphere (also because carrying cars to a new planet seems impractical and antiquated).

For our life support systems, they are designed to be very similar to earths in layout and functionality. The water system will consist of a water pumping/treatment plant and a pipework infrastructure to pump clean fresh water into buildings, businesses, and homes. The sewage system will consist of a separate laying of pipework infrastructure going to a sewage treatment plant that will also recycle the water, treat it, and send reclaimed water out to water the crops. We will set up farms of crops and livestock brought from earth. But, we will also be able to fish for native aquatic wildlife as a food source.

The pros of this plan are that since this planet is so similar to earth, we already know what to do and how to do it. Also that these systems have been tested on earth and proven to function properly already.

The cons of this plan are that not a lot is known about this planet yet; so many assumptions have been made so this may not be a very feasible plan. We will also be altering the history and natural evolution of this planet and there is no way of telling what kind of impact we may have. Introducing non indigenous life to anywhere is usually never a good idea, so we also have no way of forecasting what that impact will be on this planet either.

Living on Another Planet. (2016, Oct 01). Retrieved from http://studymoose.com/living-on-another-planet-essay 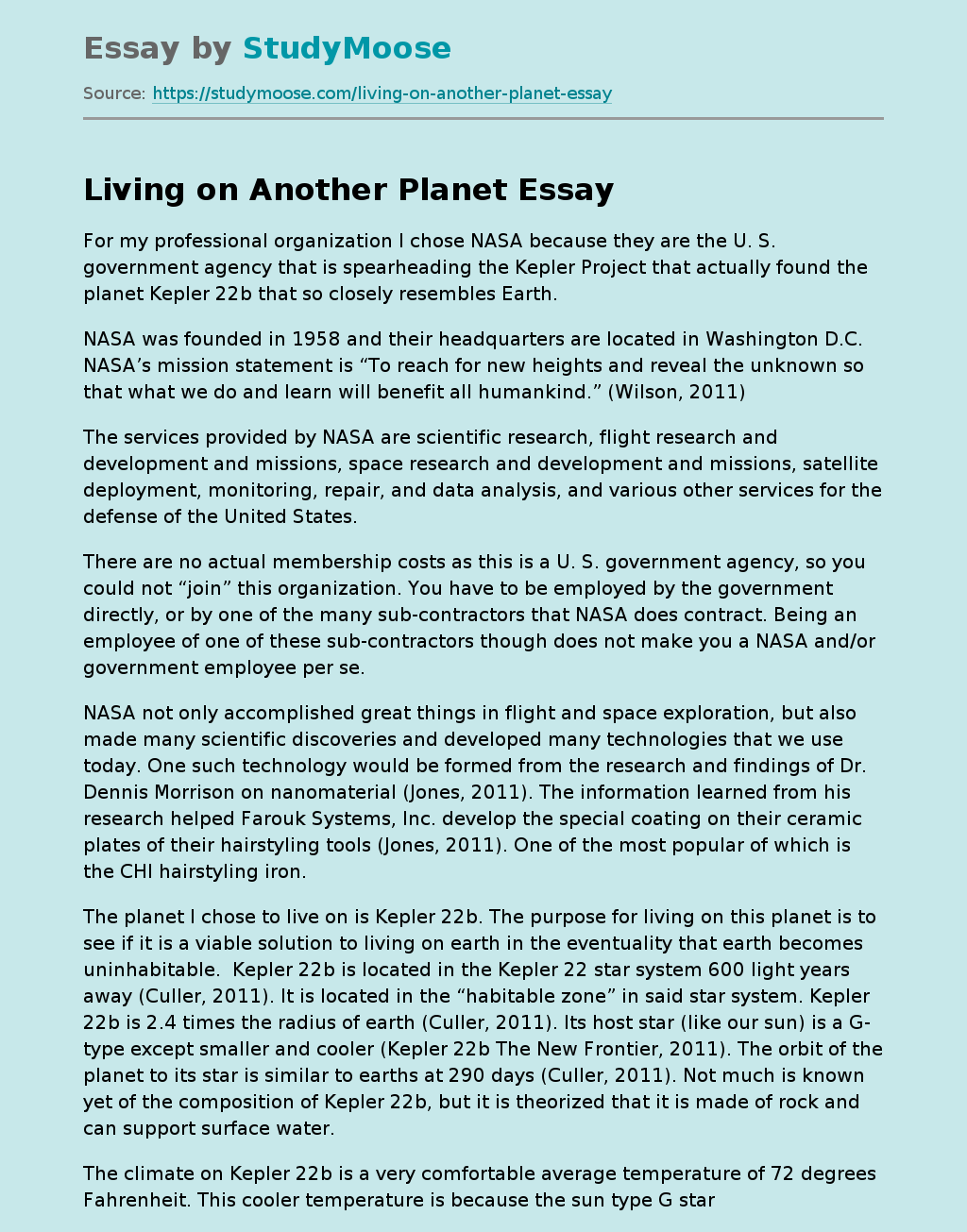