Directed by Arthur Penn was released on December 23, 1970. This is a classic western movie starring Dustin Hoffman, Faye Dunaway, Chief Dan George, and Martin Balsam. The basic outline of this film is about a white boy raised by the Cheyenne nation, a tribe, during the 19th century. It is about the contrasting lives of pioneers and Native Americans while watching a boy grow up. It is a new type of western film. The native Americans are portrayed as the good guys while the Americans are portrayed as the bad guys.

Don't use plagiarized sources. Get your custom essay on
“ Little Big Man ”
Get custom paper
NEW! smart matching with writer

Death and sadness are incorporated and the differences between the two cultures are shown. This film shows again how the Americans treated the Native Americans and our involvement in the Vietnam War.

Arthur Penn’s directing style is very realistic and mature but he definitely includes humor into every movie, probably to lighten the mood every once in a while. In an interview, Penn says ‘We thought long and hard about this, and in the first draft of the script he does die, but this death would have introduced an element of sadness into the film and we didn’t want this.

The film would have become dramatic, even melodramatic, instead of being picaresque. I also wanted to show that not only were the Indians going to be destroyed but they were also condemned to live. On the whole, audiences like their entertainment dramatically compact and homogenous, but I want the opposite. A film should remain free and open, not with everything defined and resolved.

” This shows how Penn wanted to portray his film and how important every detail was to him.

This movie was filmed in Nevada City, Montana, and Canada. I believe that the look Penn was going for was very realistic and wanted to match the weather and conditions to what it was most likely like when events like these were actually happening in the past. One of my favorite.

Scenes in the movie is about how a tribe member wants revenge in someone who killed his brother and would do anything to fight for his tribe. I feel like this scene is so great because it shows how protective and how one man isn’t for themselves whether it be good or bad, everyone has each other’s back.

At the end of the movie you see the chief who is 110 years old decides that he is ready to finally pass. He goes to lay down and get ready to die but he doesn’t. He then says that magic works most of the time but sometimes it doesn’t. And gets up and goes back to the tribe. This is my absolute favorite scene from the movie because it shows how we go on with our lives and how we honestly don’t have that much control on our lives and when we live or when we die. So it encourages me to be happy and live my life to the fullest.

I personally feel that this is a great movie. I feel like Arthur Penn did an amazing job directing this. His specific details and preferences had enhanced this movie and moved it further along so nicely. I feel like this is a classic western movie and perfectly portrays what Native Americans acted like and how the Americans reacted and viewed themselves. This is easily one of my favorite western films I have watched. 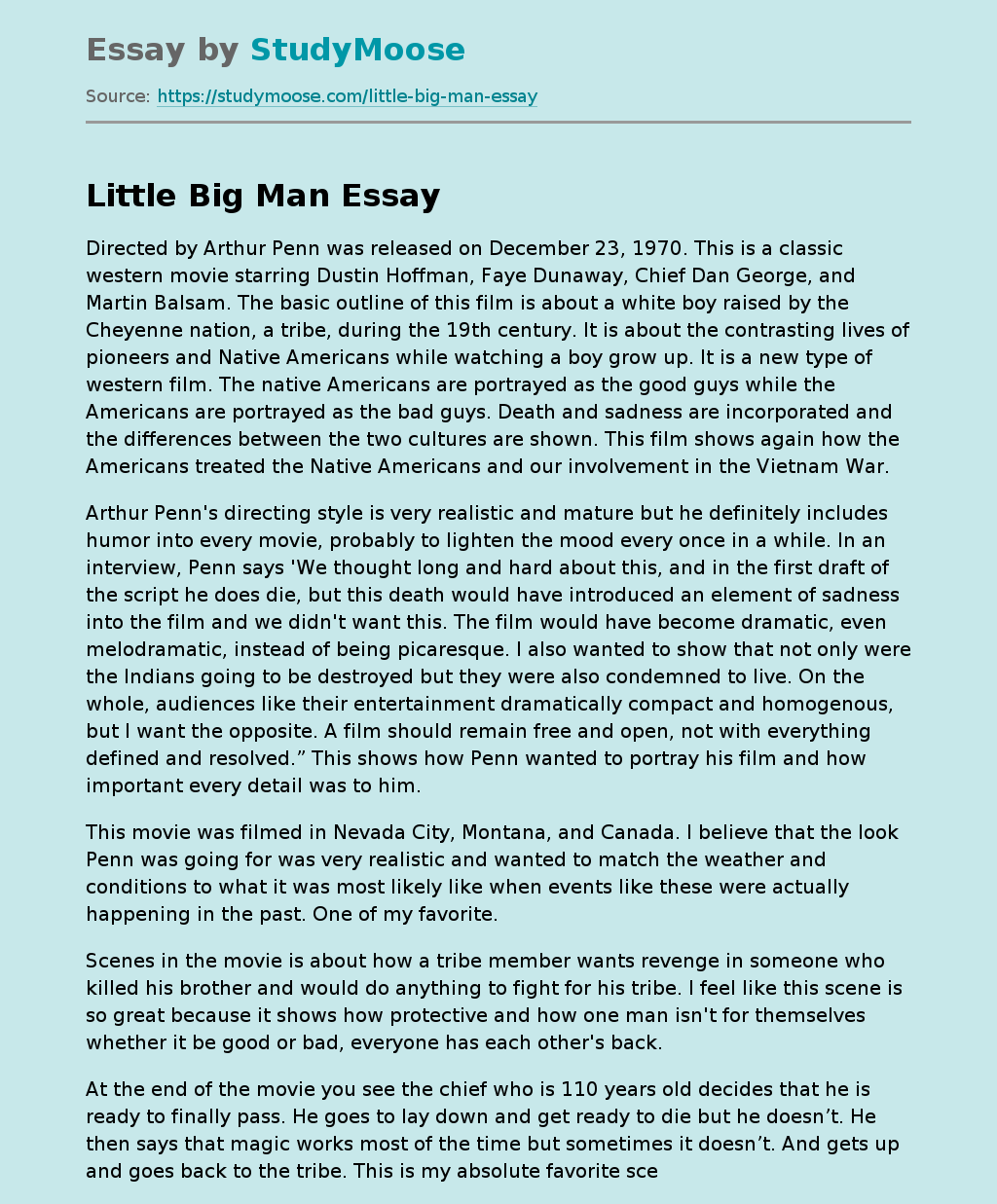