Don't use plagiarized sources. Get your custom essay on
“ Literature reviewChild labour overview Child labour has many definitions according to different ”
Get custom paper
NEW! smart matching with writer

As stated by ILO reports (2002), if a work does not interrupt’s child studies and do not harm children’s health then it is not viewed as child labour . According to the Ghana News Agency; Child labour remains one of the major problems afflicting Pakistan and its children. Pakistan has passed laws in an attempt to limit child labour and indentured servitude – but those laws are universally ignored, and some 11 million children, aged four to fourteen, keep that country’s factories operating, often working in brutal and squalid conditions .

In developing countries where there is a poor education system and high poverty rate, child labour is still frequent. In sub-Saharan Africa (2010), had the highest rate of child labour, African nations notices that 50 percent of children aged is between 5-14 working as a labour .Recent state of child labour:Today more than 200 million children are child labourers in which 120 million are involved in hazardous work and 73 million are below 10 years old. In factories 20 million children workers are employed that make toys, cotton, garments, hand-rolled cigarettes, and matches .Child Labor in Pakistan: In the Constitution of Pakistan there is a value of children rights that protect them from child labour. According to the constitution, children cannot work under the age of fourteen in any mine, factory and in employment. Human Rights Commission of Pakistan (2010), addresses that followings are the factors of child labour in Pakistan social attitudes and poverty. Ahmed (1991), gives the causes of child labor as poverty, illiteracy, large families, survival, rural and urban migration, and labour troubles and he also reviews the inadequacy of enforcement of elementary education laws, a high birthrate and the lack of economic resources. These are the causes that is why he believes the rate of child labourers in Pakistan as larger than most other countries. Ray (1988) conducted a research to find out the difference in child labour between Peru and Pakistan and he notices the similarities between both the countries that are the level of education for females in the household and impact of child’s age are similar. He also explains that household expenditure and cultural impact are dissimilar things in both the countries . Countries that suffers from this issue:Countries include Pakistan, Nigeria, and Afghanistan have the highest rate of child labourers. These countries are affected by wars and have highest numbers of children who are out of school.Due to the years of war in Syria has seen an increase in poverty among Syrian’s families, so they forced their children more to the labour force . Causes of child labour:Many scholars declared the reasons and factors of child labour. Fallon & Tzannatos (1998) and Udry (2003) said that children are forced to take child labour due to domestic income. Basu and Van (1998) and US Department of Labor (2000) state that domestic poverty limits one of the main reasons . Because children want to support your poor family. They work in order to get food. It is beneficial for an industry that they take work from children in less budget. They also work for their living . Poor families and their children depends upon child labour in order to fulfill the basic necessities. According to 2005 U.N statistics more than one forth people live in extremely poor situation. The intensified poverty in Asia and Africa may lead to children become labourers . Children from Large families are more involved in child labour comparatively small families, because of their parent’s sufficient income. One of the reason and major causes is the tradition that children have to follow their parent’s footsteps in particular trade and they learn and practice that trade at early age . Boyden J, Ling B, and Myers W highlight the results of a theory from studies made in Morocco and Indonesia that shows mostly children prefer to work on factory instead of household work because they think that household work is futureless and tough. Research on street children in Brazil presented that the children lived in the streets the reason is they wanted to help their mothers. Myers W, Ling B and Boyden J state that in working children the fear of dereliction usually exists. In most cases boys with a single mother select labouring in order to contribute to family income. According to ILO, about twenty percent of the household income comes from child labour and mostly poor families spend the major part of the income on food that is why the income of children has being crucial. In households, not all the income is allotted for the basic needs so the income of mother is as important as the income earned by the father .

Literature reviewChild labour overview Child labour has many definitions according to different. (2019, Aug 20). Retrieved from https://studymoose.com/literature-reviewchild-labour-overview-child-labour-has-many-definitions-according-to-different-essay 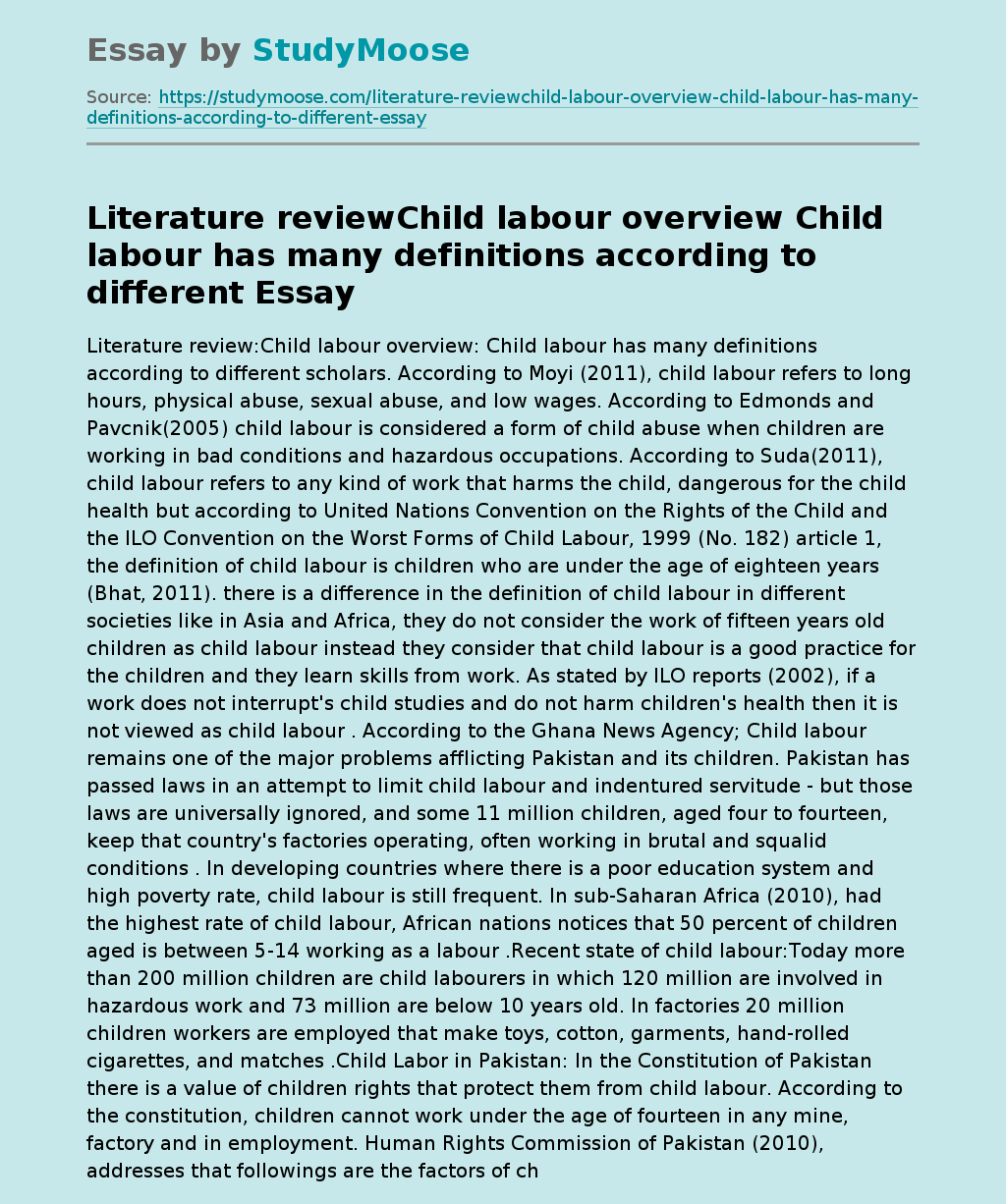