Literary Analysis of ”Shooting an Elephant”

An analysis of ”Shooting an Elephant”, by George Orwell. This non-fiction essay is a report of George himself shooting an elephant. He is a sub-divisional police officer of the town Moulmein in lower Burma. It is here he experiences a kill of an elephant. And it is not just a kill, he kills it with a rifle in front of about two thousands Indians. The elephant had gone savage and rampaged homes and killed men. Orwell reports an Indian man who was grounded into the mud by the elephant with his head sharply twisted to one side.

Don't use plagiarized sources. Get your custom essay on
“ Literary Analysis of ”Shooting an Elephant” ”
Get custom paper
NEW! smart matching with writer

He died instantly. I will like to tell you about this report with a focus on characteristics of the essay genre and afterwards conclude the intentions Orwell might have had writing this report. The report is a perfect example and well-written essay.

It has lots of objectivity, ethical reflexions and the author manages perfectly to drag the excitement. It is probably made like the Hollywood-model.

Proficient in: Shooting An Elephant

In the beginning we are informed about the situation and some conflicts. Suddenly a new conflict pops up (in this case the elephant which is going mad). Then he observes all the damage and excitement is slightly falling. Until he receives the right information of where the elephant is and he starts to move on. Now the excitement begins to rise slowly until ‘the point of no return’ where he faces the elephant. With his rifle in his hand and a huge crowd behind him expecting him to kill it he considers both ethically rightness and what may be the right to do in the situation with a huge crowd behind him.

Orwell describes his thoughts and drags the excitement. Orwell has finally considered that the right thing to do is to kill the elephant. When Orwell pulls the trigger the report reaches its climax where the excitement afterwards fades. Orwell is very detailed in his description which makes you feel you are in it and pulled the trigger yourself. This feeling is what makes the relationship between the text and the content perfect.

I conclude the episode must have been a huge experience for Orwell and therefore he wants the reader to experience the same. That may also explain the build-up of the essay and the way it is described. I also think that Orwell’s intention is to let us know that sometimes we are going through rough times with a lot of pressure and sometimes it can leave you no choice but to move forward. Even though rough times in many ears sounds like something you would avoid; it can actually bring you greatness in the eyes of another but most of all in your own.

An analysis of “No witchcraft for sale”, by Doris Lessing. A short summary: The story is about a rich white family (The Farquars) who lives in Africa and own both a servant and a cook. The Farquars have a son (Teddy) whom becomes great friends with the cook. Suddenly when Teddy is a couple of years he says something racist to the cook. The cook is still respectful, but they are not as close as they used to be. At one day Teddy rides his scooter and a venomous tree-snake spits in his eyes. Mrs. Farquar is terrified and cries. The cook randomly runs into the bushes, and after ten minutes he comes back with a plant in his hand. He stripped the leaves from the plant and chewed it into a mass which he spitted onto Teddy’s eyes and roughly rubbed it with his fists.

After a few hours Teddy is able to see again. The news spread quickly and one day some scientists came and wanted the cook to show them the healing root. The cook refused it for a long time but at last he gave in. I found the text quite hard to read at the beginning because it took a while to fully know who each person was, how they were related and where the story was happening. The narrative technique is mainly scenic. But occasionally it has an interior description of Mrs. Farquars feelings. The text is composed with a chronological narrative but in the beginning it was a bit complex. The story has a couple of themes, but it basically deals with the conflict between traditional medicine (the witchcraft), which comes naturally, and the pharmaceutical which the doctors profit from.

The conflict could be if the traditional medicine should be for free or for payment. The text is also dealing with different races and social classes. If I go into the text; it is written that the cook is stubborn and does not want to tell the scientists about the magical herb: “But they went on persuading and arguing, with all the force of their exasperation; and Gideon continued to say that he could not remember, or that there was no such root, or that it was the wrong season of the year, or that it wasn’t the root itself, but the spit from his mouth that had cured Teddy’s eyes. He said all these things one after another, and seemed not to care they were contradictory. He was rude and stubborn.”

The scientists give me a feeling of how they sort of use their “rank” to just expect the cook to obey their wish and show them the plant. But the cook’s stubbornness symbols how the natives want their importance in this world. If they give away all their medical knowledge they might not continue being that important. I think Doris Lessing wants the reader to maybe get a new view, and most of all a realistic one on natives. How natives’ traditional knowledge is indispensable in some situations and they are to keep it. They are more valuable and useful than lots of people thinks. So I think Doris wants all the lots of people to have a new view.

Task 2.3A: A comparative essay about the two previous stories The two previous stories have not much in common, but the two main characters both succumb of different pressures. In George Orwell’s occasion he lies in the sand and aims on an elephant. The Indians has made a human wall behind him and expects him to shoot and kill the elephant. While George lies in the sand he sees the innocence of the elephant and assesses the best thing to do. He fights against his believe. The Indians see the white man as a mighty human being, so for George; there is no turning back. Gideon is an African native which makes him prejudged by lots of white people.

In their eyes he is to serve the white human race. But one day when a little boy who was a good friend of him was spit in the eyes by a venomous snake, he ran into the bushes and came back with a healing root which he used to cure the boys eyes with. So it turned out that Gideon was not just a native, but a brilliant medical man. When the scientists from town heard of it, they came to him and wanted him to show them the root. Gideon did not want to sell the witchcraft. Maybe he considered if this situation probably could give the white race a new view of what natives are capable of.

Maybe he wanted to protect his former tribe’s secrets and maintain the mysteriousness of the natives’ power. In his heart he really wants to keep it as a secret. George Orwell also fights against his conscience. What is ethical correct to do. His heart tries to convince him to leave the elephant alive. The Indians behind him affects him to do the opposite. The affect of their surroundings overcomes their conscience and both of them succumb. For George the act surprisingly gave him a great experience which was hard to regret. And for Gideon his succumb decreased the chances of future blindness. Both of their acts are to be proud of.

Literary Analysis of ”Shooting an Elephant”. (2021, May 30). Retrieved from https://studymoose.com/literary-analysis-of-shooting-an-elephant-essay 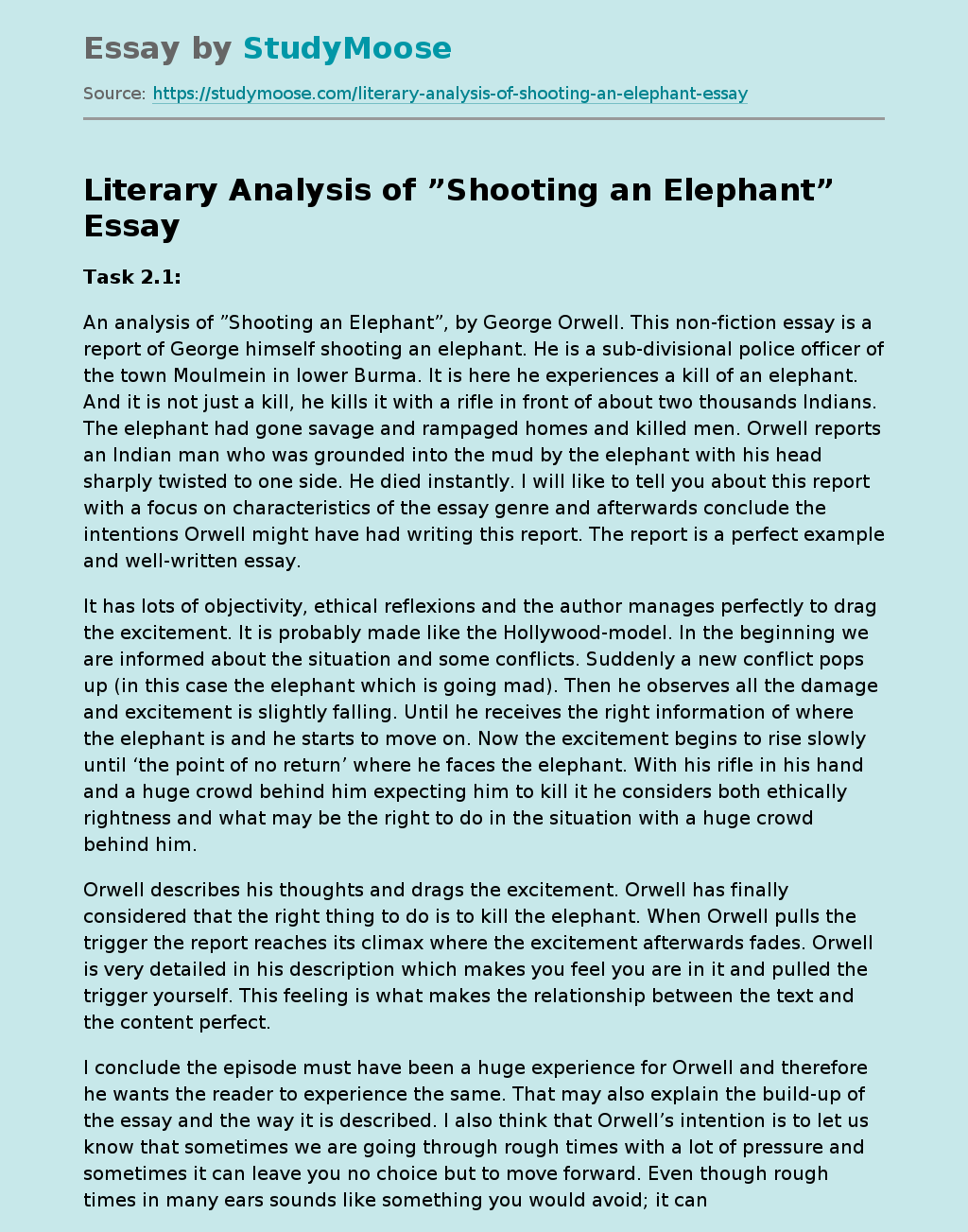