Literary Analysis of Doctor in the Surgeon as Priest

Opening with the description of the day Yeshi Dhonden is to “make the rounds” and describing Dhonden as an “emissary from the gods” the author sets the scene for the remarkable medical feat he was about to witness. He explains the room the “clutch of whitecoats” were waiting in by using phrases like “ill- concealed dubiety” and “suspicion of bamboozlement” to describe what the air in the room was “heavy” with. Ending the introduction by giving a physical description of Yeshi Dhonden the author illustrates the setting just as it is seen.

Don't use plagiarized sources. Get your custom essay on
“ Literary Analysis of Doctor in the Surgeon as Priest ”
Get custom paper
NEW! smart matching with writer

The diagnosis is equally anonymous to Dhonden as it is to the “Whitecoats”, by clarifying that the author sets up what is about to happen. The information that Dhonden has spent two hours prior to doing the rounds “purifying himself” to accomplish the task at hand contributes to the meaning of this narrative greatly. The description even goes further to present that he prepared himself by “bathing, fasting, and pray[ing]”.

This sets Dhonden up upon a pedestal because the majority of the “whitecoats” had spent the hours prior to the examination by simply having breakfast and going about a normal morning routine. The doctor stands overlooking the patient “favoring” nothing on her body, but he maintains this connection between him and the patient for “a long time” and this action gives off a sense of equality between the two. Regular onlookers to the examination could notice “no physical sign” of her illness. Dhonden then as if to conjoin himself with the patient “takes her hand” and very peacefully holds it in his own and “feels her pulse”.

As the two sit there it was as if they went into a “special place of isolation” and Dhonden was in no rush to withdraw from this state.

The purpose of the description of the moments Dhonden and the patient shared in tranquility was to establish that the moment was “exclusive” and could not be completely understood by anyone. Breaking the spell, he “straightens” and releases his grip of the woman’s hand; the connection was no longer. As Dhonden exits the room the patient calls out to to him and simply says “Thank you, doctor”. The patient then touches the place on here wrist that he had held in an effort to “recapture” the connection between the two. The author uses this imagery to portray that although the two shared no words they established a connection that even the patient felt.

Although the examination is over, however, the author explains what happens in the conference room. As Dhonden begins to speak the author explains that him speaking and his translator concurrently speaking sounds like a “chanting monk”. He explains using imagery that before the patient was even born she was already infected with the disease. He says that a wind was “coursing” through her body and “currents” were breaking against barriers. He then puts it into common medical terms by saying that she has “Congenital heart disease”. It takes Selzer a moment to contemplate what Dhonden has said and he takes the figurative imagery that he used and connected it to the medical terminology. To have understood this by only listening to the sounds of the body completely astonishes Selzer. The author portrayed Dhonden as a godlike figure that none could fully understand and when he finally does speak it contributes to his portrayal more. Dhonden never presented himself as any more important then the other examiners but through Selzer’s eyes he was superior from the beginning. Even after Dhonden is long since departed from the building Selzer still “hears” the sound of his voice and feels like he’s “touched” by something “divine”. This yet again contributes to the godlike representation of Dhonden presented by the author.

There is more to healing then simply healing through surgery, there is also a spiritual aspect to it. Richard Selzer has witnessed this first hand, Yeshi Dhonden showed him that even when normal medical techniques used to diagnose patients fail, spiritual techniques can obtain the goal.

Literary Analysis of Doctor in the Surgeon as Priest. (2016, Apr 02). Retrieved from https://studymoose.com/literary-analysis-of-doctor-in-the-surgeon-as-priest-essay 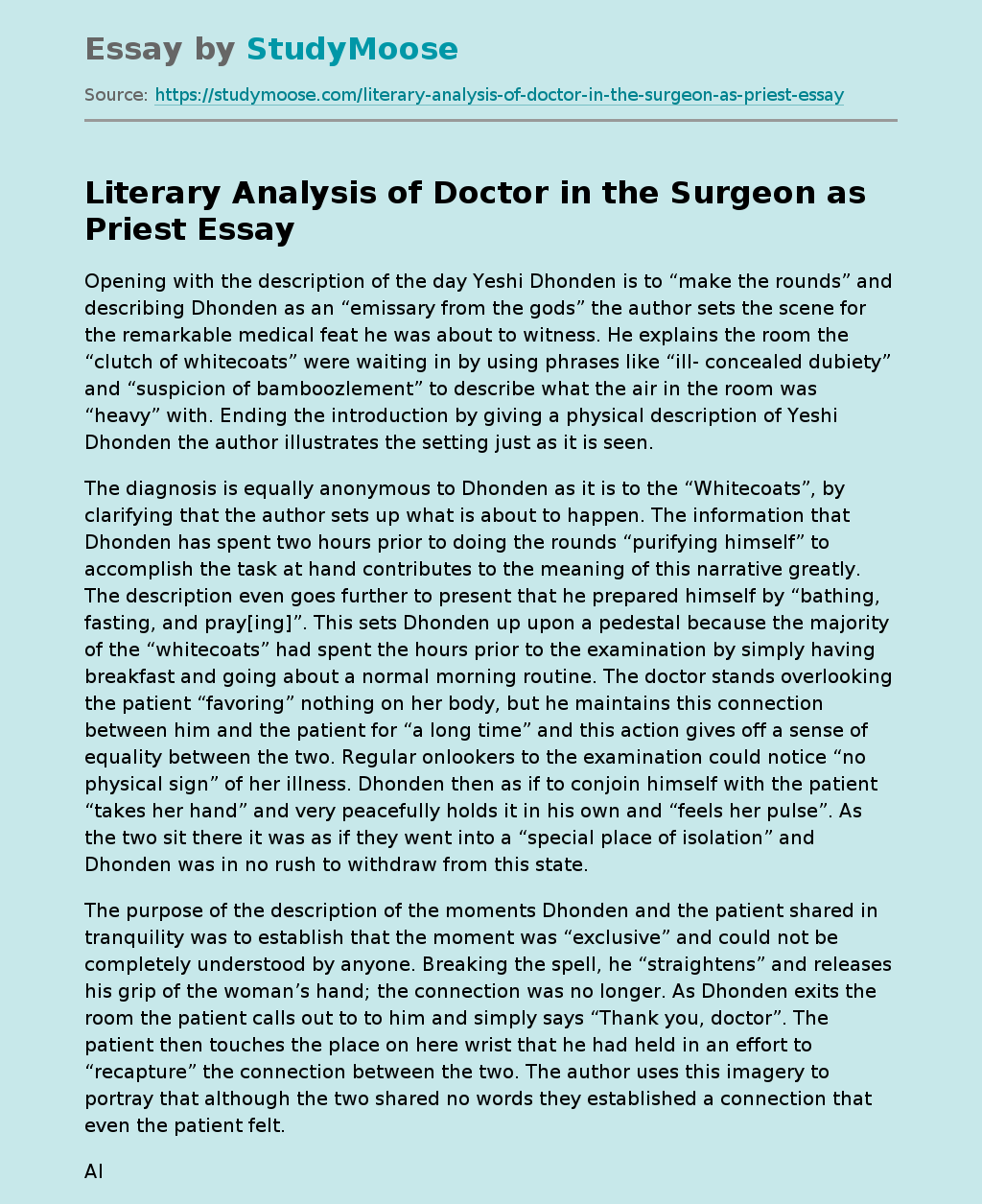