It is often said that a ‘First impression is the Final Impression’ (AJS, 2013). Unfortunately, this did not turn out well for Lisa Benton, a Harvard Business School grad, who had to face this ordeal from her manager and her co-worker at her new job. How did she get into this mess? Could she have done something differently? To begin with, I feel the biggest mistake Lisa made was turn down the offer from Right-Away. According to me, ‘A known enemy is always better than an unknown friend’.

Don't use plagiarized sources.
Get Your Custom Essay on Lisa Benton – Analysis Just from $13,9/Page

Lisa was liked at Right-Away and was well acquainted with everyone there, furthermore she had a good relationship with Kingston, and this would have helped her rise higher sooner. Next, before beginning work at Houseworld, Lisa should have enquired with HR as to who her reporting Manager would be. This is essential and she could have spoken to employees who worked under Linton and got their feedback on Linton and based on this feedback could have requested HR for another project/manager.

On her second day, Lisa had questions for Linton but when she noticed Linton and Scoville in an intimate meeting she left and eventually asked the questions to Scoville. Over a period of time, Lisa sought answers only from Scoville and not from Linton, thus adding a kind of a barrier between her and Linton. A very vital point was that Lisa was not assertive enough. This is well indicated by the delayed lunch meetings between her and Linton, when they were to discuss her objectives. In addition, there were several assumptions made between Lisa and Linton when it came to the meetings.

Lisa assumed, she should be in a ‘learner’ mode, but the feedback given to her was that she was too quiet during the meetings. Lisa should have identified her responsibilities for the meetings beforehand. There were a few occasions on which Scoville’s behavior could be questioned for instance when he would yell at Lisa. Also, his condescending nature would make Lisa uncomfortable.

However, instead of tolerating this, Lisa should have reported this to HR, who could have dealt with Scoville in an appropriate manner. Lisa would always make references to Right-Away and the work she did there, such as “At Right-Away I would…”, this could have been avoided completely, Lisa is no longer at Right-Away and these references are not needed. As already mentioned, Lisa relied too much on Scoville, thus giving him more power. (Ancona, 3rd Ed)

In certain cases, this could have worked as by giving more power to people like Scoville is one way to control them, but for her this approach failed. Finally, when Vernon asked Lisa, if she was happy with her job, Lisa should have been honest and told him her problems, after all everyone is working for the organization and its’ success. Lisa could maintain good relationships, this was clear from the relationships she had with her other colleagues; however the Lisa-Linton-Scoville relationship had many areas for improvement. What she should do now?

The first option Lisa has is to call up Kingston at Right-Away, admit that she made a mistake and request them to rehire her. Kingston spoke highly of Lisa and Lisa had a good relationship with her co-workers at Right-Away, furthermore she would be promoted to VP in a few years and the pay at Right-Away is much better than Houseworld. The next option is to speak to Vernon and HR regarding a change in her project and division at Houseworld. This would alienate her from everyone and will cause a negative effect on her chances of a promotion at Houseworld, as Lisa would be known as someone who cannot resolve conflicts.

The final option and the one I would recommend would be to continue working in the same team and resolve all differences with Linton and Scoville out of the office and have a fresh new start. Unfortunately Linton is not the best of trainers and when Lisa does change her role after 12 months as this was the case with Houseworld, she will have to put in more effort to make up for the lost training. This was the case colleague who used to report to Linton earlier.

However, this would be a great learning curve for Lisa in her career on ‘How not to be a Bad Manager’. Conflict resolution plays a vital role in managing projects and if Lisa demonstrates this, it will do laurels for her career later on. References: 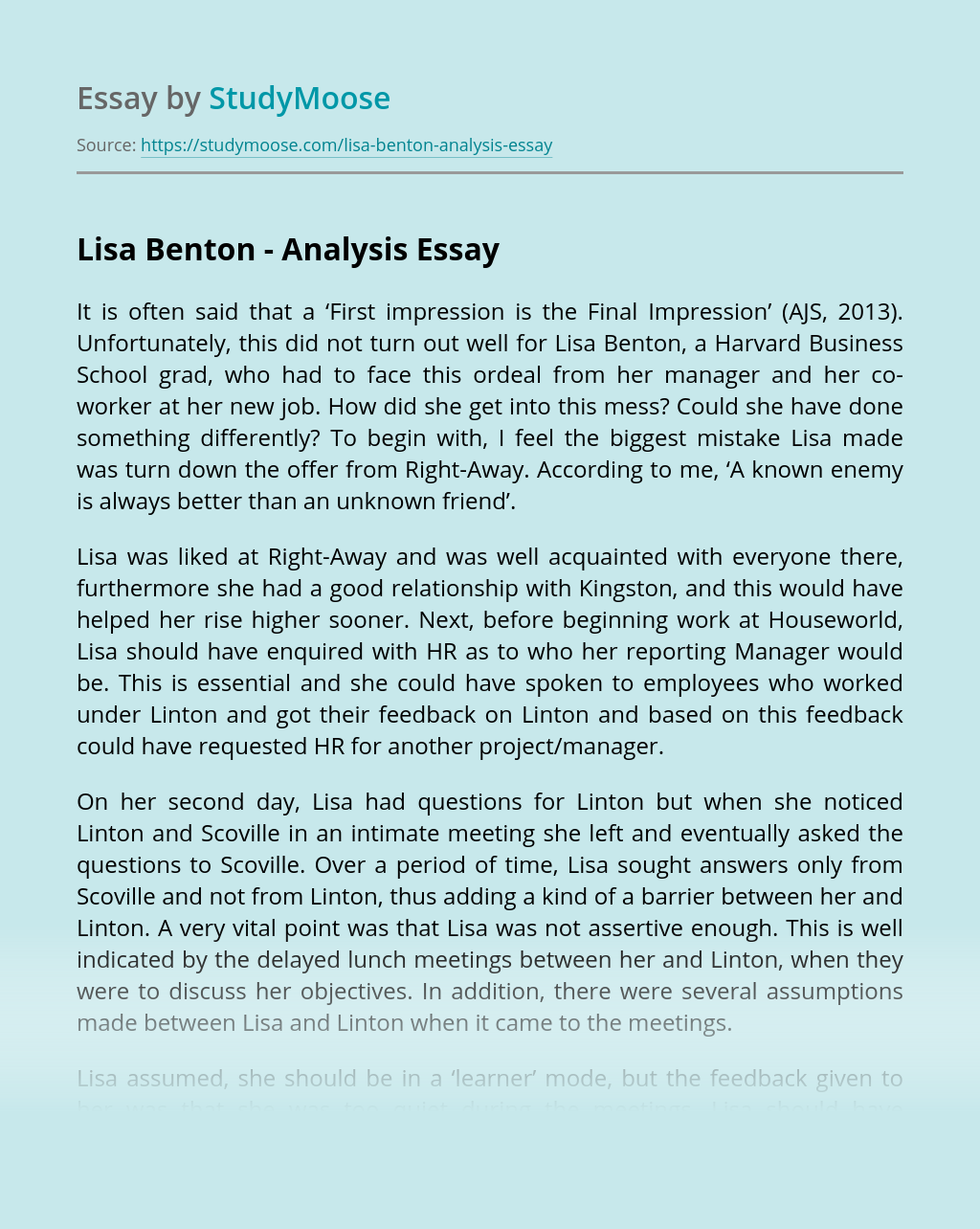 A strong, intelligent man, Martin Luther King Jr., once said, “Our lives begin to end the day we become silent about things that matter,” and what mattered 50 years ago, was finding a sense of equality in the world. That each person could feel as if they were all equal to one another, without feeling... VIEW ESSAY

View sample
Impact of the Computer and Internet

Computers first made there debut and have been around since in the 1940s and the Internet since in the 1970s. Computer were large single room unit that have changed into hand held devices and microchips. The Internet was a blog where people from all over the world could post questions and get answers and now... VIEW ESSAY

Tracing the development of the piano: from before its invention to nowadaysIntroductionNowadays, the piano is the most common keyboard instrument, and is widely used by a lot of people globally. But who would have thought that back when the piano was just invented, it gained little recognition from the public, and it was not until... VIEW ESSAY

I, Mostafa El khouly, am a 32 years old engineer. I am an entrepreneur by nature and a technology evangelist. My dream since I was in my last years in college is simple; to create a multi-billion dollars company that creates an Egyptian technology that dominates the market. I am a true believer in entrepreneurship... VIEW ESSAY

This is about artistic freedom and basic rights of free expression, which need to be available to all, whether they have money and lawyers or not. ” –Shepard Fairey “The journalism that AP and other organizations produce is vital to democracy. To continue to provide it, news organizations must protect their intellectual property rights as... VIEW ESSAY