The Lion King is a true hero’s journey that takes place in the savannas of Africa. The title “The Lion King” emphasizes that a lion is king, referring to the main character, Simba. Simba is the hero in the story because he regains his kingdom and defeats evil. He takes responsibility for his actions and his kingdom, and regains order and control. Simba takes part in a hero’s journey by being a part of the departure, initiation, and the return.

Turn in your highest-quality paper
Get a qualified writer to help you with
“ Lion King Movie: Simba’s Heroic Journey ”
Get high-quality paper
NEW! AI matching with writer

After Simba’s father, the ruler of the kingdom is killed while trying to save Simba caught in a heard of wilder beasts; is where Simba’s departure begins, he is banished from his homeland by his evil uncle Scar. Scar tells Simba “to leave and never return.” (The Lion King), Scar then send his hyenas (who act as his personal army and assistants), to kill him. But Simba escapes and is found by Timon (a meerkat) and Pumba (a warthog), he goes on to grow up in a paradise-like jungle with them.

Years later, Simba’s best friend from the pride lands Nala comes in search of help and happens to find Simba by chance. She asks him to return with her because of Scar’s oppressing reign, but he refuses his call to adventure. Scar has told everyone in the kingdom that Simba was killed in the same stampede his father was.

Nala realizes that since samba is alive, that means he’s the king. His reaction “No I’m not the king, maybe I was gonna be but that was a long time ago.

” (The Lion King) Simba wouldn’t tell her the reason for his refusal, but it was because he believed his father’s death was his fault; and he was scared to return there, he didn’t have any confidence in himself, that he could overtake Scar. Simba meets Rafiki while out one night reflecting on his call to adventure, and helps initiates Simba’s return to the kingdom. Rafiki is in a tree singing, he seems to follow Simba, and he lets Simba know that he knows exactly who he is. He becomes Simba’s mentor and leads Simba into an enchanted jungle of tangled trees and roots, where he says Simba’s father, named Mufasa, is living (even though he is really dead). He is led to a small pool of water, where Rafiki tells him to “look in the water, and tell me what you see” (The Lion King) He looks, but only sees a reflection of himself. When he is told to “look harder” (The Lion King), he sees his father in the ripples of the water. Rafiki tells Simba his father “lives in you”(The Lion King).

This scene in the movie symbolizes that Simba was always meant to be king. Suddenly a wind blows and in the clouds, Mufasa’s spirit appears. Mufasa tells him that he has “you have forgotten who you are, and so you have forgotten me” (The Lion King) He also explains that he is “more than you have become, you must take your place in the circle of life” (The Lion King) he tells him to “remember who you are, you are my son and the one true king” (The Lion King). Mufasa also acts as a mentor to Simba throughout this movie through spirit. Simba has a change of heart immediately after he meets together with his father. You can tell this because Simba states, “It looks like the winds are changing,” (The Lion King) as the winds calm, this is a symbol for his personal winds of change, or his change of heart. Rafiki teaches him that, “You can either run from the past, or learn from it.” (The Lion King) This statement is important because Simba needed to put the death of his father behind him instead of running from it. He realizes he needs to return to his rightful place as king. The struggles he knows he must face are regaining his kingdom and defeating Scar.

“The King has returned.” (The Lion King) These powerful words are spoken by Rafiki when telling Nala, Timon, and Pumba that Simba has gone back to the pride lands to put an end to Scar. Before departing back to Pride Rock, to gain his kingdom back; Nala, Timon, and Pumba all offer to help him. Simba comes up with a plan to take back his kingdom. First he wants everyone to continue to think he’s dead. Second, Simba uses Timon and Pumba to distract the hyenas while he and Nala sneak in. Third, Simba tells Nala to “rally the lionesses” (The Lion King) as a form of weapon against the hyenas. They set their plan in motion. While fighting, Scar backs Simba off to the edge of a cliff; as he hung off the edge of it as his father did before his death, that’s when Scar uses this opportunity to admit that he killed Mufasa and that Simba didn’t have anything to do with it.

Simba then leaps up and attacks Scar and holds him down by the neck and makes him admit what he did in front of the hyena’s and other lions. Every one then begins to attack one another. Scar and Simba once again are face to face. As Simba is coming toward Scar, he begs for Simba’s mercy. And then blames everything he did on the hyenas calling them “the enemy” (The Lion King). The hyenas end up hearing him through the walls of fire. Simba and Scar begin to fight. Simba wins the battle by throwing Scar off a cliff. The Hyena’s then appear where Scar has landed and attack him for his betrayal. After defeating Scar, Simba reunites with his family as heavy rain puts out the fire, and the darkness washes away. Symbolizing that oppression that Scar’s reign has caused over the kingdom has come to an end.

Simba turns to Rafiki, who then points to the top of the rock (Simba’s “throne”). They hug and Rafiki simply says to Simba “It is time” (The Lion King). Time for Simba to take this throne, and rightful place in the kingdom and the circle of life; on top of his throne Simba lets out a loud roar to let the kingdom know that he has returned, and the kingdom answers back. This symbolizes Simba’s resurrection. Without taking on his call to adventure, Simba would have never realized his true potential, or been able to take his rightful place in the kingdom.

While Simba is contemplating his call to adventure, he meets his mentor, Rafiki, who helps him change his heart and to go back to his rightful place. He experiences his initiation when he changes his heart after he meets with his father. Simba goes on his return by gaining helpers and making an entrance to the pride lands. He survives a near death experience, at the hand of Scar. He engages and survives the final battle which he wins; gaining his elixir a new found confidence. Simba is changed and he has regained his rightful place in the kingdom and circle of life 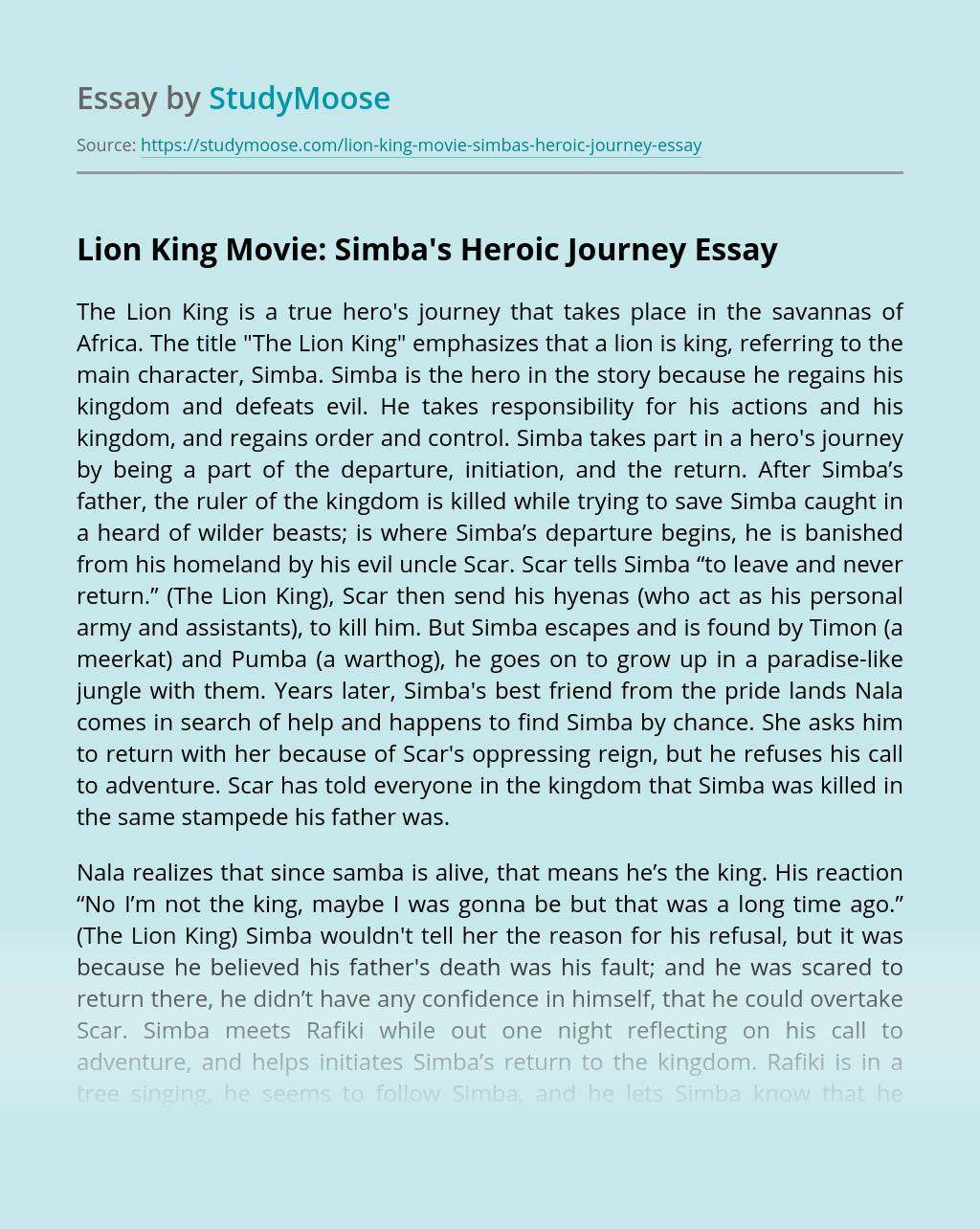 Turn in your highest-quality paper
Get a qualified writer to help you with
“ Lion King Movie: Simba’s Heroic Journey ”
Get high-quality paper
Helping students since 2015
Stay Safe, Stay Original