The Genre of this novel is prose and fictional. This is shown in the opening chapter through the old English used and also the description of the surroundings. The intended audience for this text is readers of the 19th century. However there is also a second audience which is anyone that reads the novel today. The purpose of the text is to entertain. This is because it is a fictional novel. The mode of the novel is only text.

Don't use plagiarized sources.
Get Your Custom Essay on Linguistic analysis of novel Just from $13,9/Page

This is because there is not speech or pictures involved in the extract only written text. The written text is uses formal language such as “Lord Chancellor sitting in Lincoln’s Inn Hall”.

Also the formal text is planned as it is a chapter from a book. It also has no multiple features. There are lots of lexical choices in this extract. A simile is used “as if the water had but newly retired from the face of the earth”.

This compares something to something else and also helps to describe the surroundings. There are lots of examples of personification, “death on the sun”, “Full grown snowflakes”, “holds this day in the sight of heaven and earth”. The examples given, show how objects can be given human qualities.

By doing this objects sound like they are humans and act like humans. Jargon (specialist language) is also used “megalosaurus”. The use of this is that it adds to the formalness of the extract, and also helps to describe the surroundings. It is also a noun. An oxymoron is also used- “elephantine lizard”. The use of this is that it may show old English being used or help to describe surroundings. There are 3 different semantic fields used in the extract. The first one is weather. Examples include “November weather”, “soft black drizzle” and ” fog everywhere”. The second field is scenery.

“Heaven”, “earth”, “river” and “street corners” are all examples of scenery semantic fields. This could be done because it helps describe the surrounding area of Where the novel is set. The third field is nouns (humans and animals). Examples include “lord chancellor”, “dogs”, “horses” and “plough boy”. The use of nouns is that they clearly show characters’. The use of semantic fields is that it helps the give a clear understanding of the surroundings, characters or anything else involved in the text. There are 4 kinds of grammatical choices used in the extract.

The first one is nouns. Proper nouns are used in the text and examples are “LONDON” , “Essex ” and “Lincoln”. The uses of proper nouns show places or names. However others nouns are also used “river” and “horses”. These nouns are to describe objects, animals or humans. The second grammatical choice is adjectives. Examples include “soft”, “black” and “misty” these are used to describe a noun and the use in this extract is to either describe surroundings or an object. The third grammatical choice is verbs. “Looming”, “creeping” and “drooping” are all examples.

The use of them is they help to describe an action or the surrounding. This is good as it helps with the description of the environment surrounding the place being talked about. The finale grammatical choice is sentences. There are a range of different sentence types used and they all help with the formality of the text. Mostly longer sentences are used as they describe the surroundings. However the sentence “LONDON” is a simple sentence. Phonology is also used. This is the use of vocal elements to add extra force to what is being said.

An example is the fact that the word “fog” is repeated lots. This could be because it is the main thing that can be seen in the extract. Also because of the formal language used this can also add extra force to certain parts of the text. There are many different elements to the discourse structure of the text. The first part is the written genre of the text. As the novel is written by a Victorian author you are expecting the use of old English. Also this novel is expected to be read by older readers who would understand the culture there is likeier to be use of complex language.

The content of the novel is mostly the description of the environment in London in the winter holidays. It is also a piece of Victorian fiction based on Victorian London. The point of view is that it is narrated by an educated person. This is shown through the type of language used, e. g. jargon. The point of view is also by someone who knew of the environment of London in winter, well enough to describe it. This is shown because the detailed description shows that the writer knows the area well. The register of the text is good Standard English.

It also uses Victorian English and is very formal. This is because of the tone of voice used. Finally there is a continuous use of external coherence. This is because there is lots of reference to the real world and is really descriptive of the scenery. There is not much graphology used as there are not pictures or colours involved. However the fact that the word “LONDON” is in capitals it stands out from the text. Also the use of different size paragraphs and punctuation also shows graphology of the text in a different form.

Pragmatics are used in this extract. “Losing their foot” is an example. This shows that people are falling over because it is so muddy and wet. A second example is”chance people on the bridges peeping over the parapets”. This place is perhaps a tourist spot because local residents wouldn’t be sight seeing. A final example is “holds this day in the sight of heaven and earth”. This perhaps is to do with religion. This is because “sight” could be a reference to god. In conclusion lots of linguistic terms are used and this helps readers to understand the text. 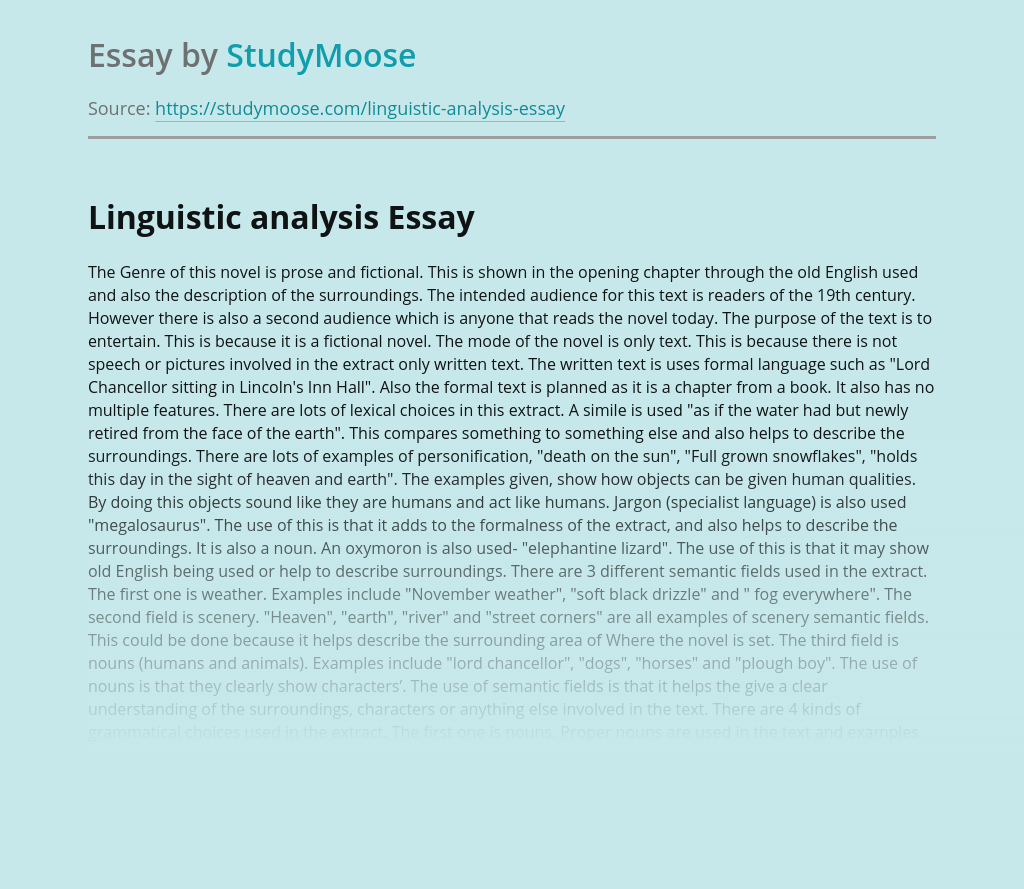