On-line and off-line personae in the virtual communities

Computer-mediated communication systems exhibit a fair amount of interpretative flexibility. That is, they can mean different things to different individuals or different groups, and their use continues to be interpreted and reinterpreted with the passing of time. 1 It is well known that the Internet was originally conceived as a military project supervised by the Defense Advanced Research Project Agency, created during the Cold War as an information system capable of surviving a Soviet nuclear attack.

2 Those same features of decentralization and flexibility that should make it militarily invulnerable contributed to giving us the Internet of today: an international, chaotic, dense bazaar inhabited by all kinds of people.

Don't use plagiarized sources. Get your custom essay on
“ On-line and off-line personae in the virtual communities ”
Get custom paper
NEW! smart matching with writer

This paper is intended to discuss the relationships in social worlds built by people on computer networks. Virtual communities has lately become a fashionable term which is used as a metaphor to indicate the articulated pattern of relationships, roles, norms, institutions, and languages developed on-line.

This is not to say that the term virtual community is to be taken as a positive value in itself, nor that as an enthusiastic or optimistic view of computer networks.

Even the very authenticity of communities developed on-line should not be taken for granted without an effort to come to a commonly accepted definition of what a community really is.

Anyway, when communities are not looked at with romantic eyes, but with the eyes of the interpretivist ethnographer: according to Geertz, “man is an animal suspended in webs of significance he himself has spun and the job of the researcher is to achieve a thick description of those webs”4.

Anyone familiar with the pattern of life on internet chat boxes and forums ,on MUDs and MOOs5 , or on newsgroups cannot fail to note that cyberspace constitutes a wonderful example of how people can build personal relationships and social norms that are absolutely real and meaningful even in the absence of physical, touchable matter.

Theories of reduced social cues6 in CMC have thus been questioned by a number of more constructivist-oriented studies7 whose common claim is that the availability of means of communication limited by characters typed on a computer keyboard does not prevent users from constructing their own social worlds. Social worlds, even in cyberspace, are exceedingly complex and their basic characteristics cannot be determined by any intrinsic feature of the communication medium: relationships on the net can be altogether more or less democratic, uninhibited or egalitarian than in real life, depending on an intricate pattern of elements.

In fact, proponents of the SIDE model. Social Identity De-individuation8 showed that in particular conditions on-line behavior can be even more social and normative than face-to-face interaction. The total readership of a computer conference is always somewhat larger than that of the actual active users; computer conferences are for some people just unidirectional information sources.

On-line and off-line personae in the virtual communities. (2020, Jun 02). Retrieved from http://studymoose.com/line-off-line-personae-virtual-communities-5749-new-essay 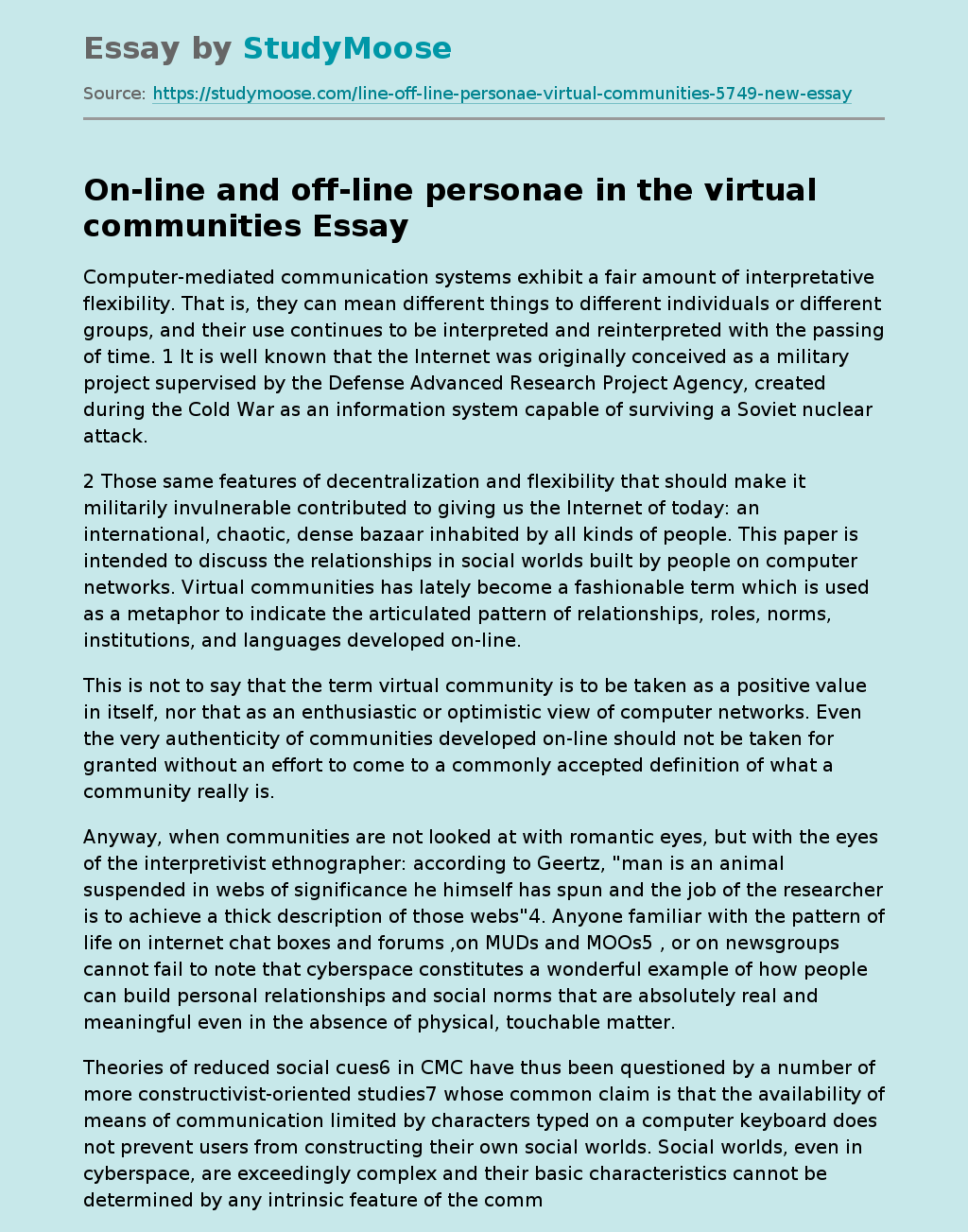