Limitation of Using GDP to Measure Standard of Living

Although national income is a convenient way for measuring the standard of living between countries, it still has its limitations.

Firstly, as national income statistics are calculated from millions of different returns to the government, inevitably mistakes are made. For example, returns may be inaccurate or simply not completed. This makes the data incorrect, hence hindering people to analyze the living standard of a country accurately.

Secondly, National income does not record the output produced by “hidden economy”. Taxes such as VAT, income tax and National insurance contributions, and government regulations such as health and safety laws, impose a burden on workers and businesses.

Don't use plagiarized sources. Get your custom essay on
“ Limitation of Using GDP to Measure Standard of Living ”
Get custom paper
NEW! smart matching with writer

Some are then tempted to evade taxes and work in the black economy. For instance, in the building industry, it is common for workers to be self-employed and to not declare their income to the tax authorities. As the size of the hidden economy is difficult to estimate and calculated, national income statistics often underestimate the true size of national income and the standard of living of a country.

Apart from national income, health indicators can also measure the standard of living between countries.

From table 6, it can be seen that the under-five mortality rate, per thousand of the population in Tanzania is 15 times greater than USA. It means that the childcare in Tanzania is poorer and lacked development, leading to a lower standard of living. Take life expectancy at birth as another example, people in New Zealand live 1 year longer than the one in UK on average. It means that people in New Zealand are both mentally and physically healthier and have a high standard of living in general. Therefore, by looking at the health indicators, it gives us a better basis for making a comparison.

Education has great influence over individuals’ standard of living. Although USA has a higher number of gross national income than New Zealand, it does not mean that people in USA have higher living standard than the one in New Zealand. Education indicators should also be taken into account. For example, percentage of school enrolment of secondary in New Zealand is 105.7, which is 28% more than USA. As people who are well educated are more likely to access a well-paid job in the future, when New Zealand has a higher number of people receiving educations, it means that the country’s overall standard of living is higher.

Finally, selected indicator also helps us to measure the standard of living between countries. Take the number of internet users as example; the number of internet users in Tanzania is 400 times less than USA. It means that people in Tanzania may not have a computer while most of the people in the world take for granted. Besides, the electric power consumption in Tanzania is 235 times less than USA. It reflects that people in Tanzania seldom consume electric power, which means they may be using some conventional methods to generate energy, such as burning firewood for cooking. These all bring inconvenience to their living and lower their standard of living.

Limitation of Using GDP to Measure Standard of Living. (2016, Nov 09). Retrieved from https://studymoose.com/limitation-of-using-gdp-to-measure-standard-of-living-essay 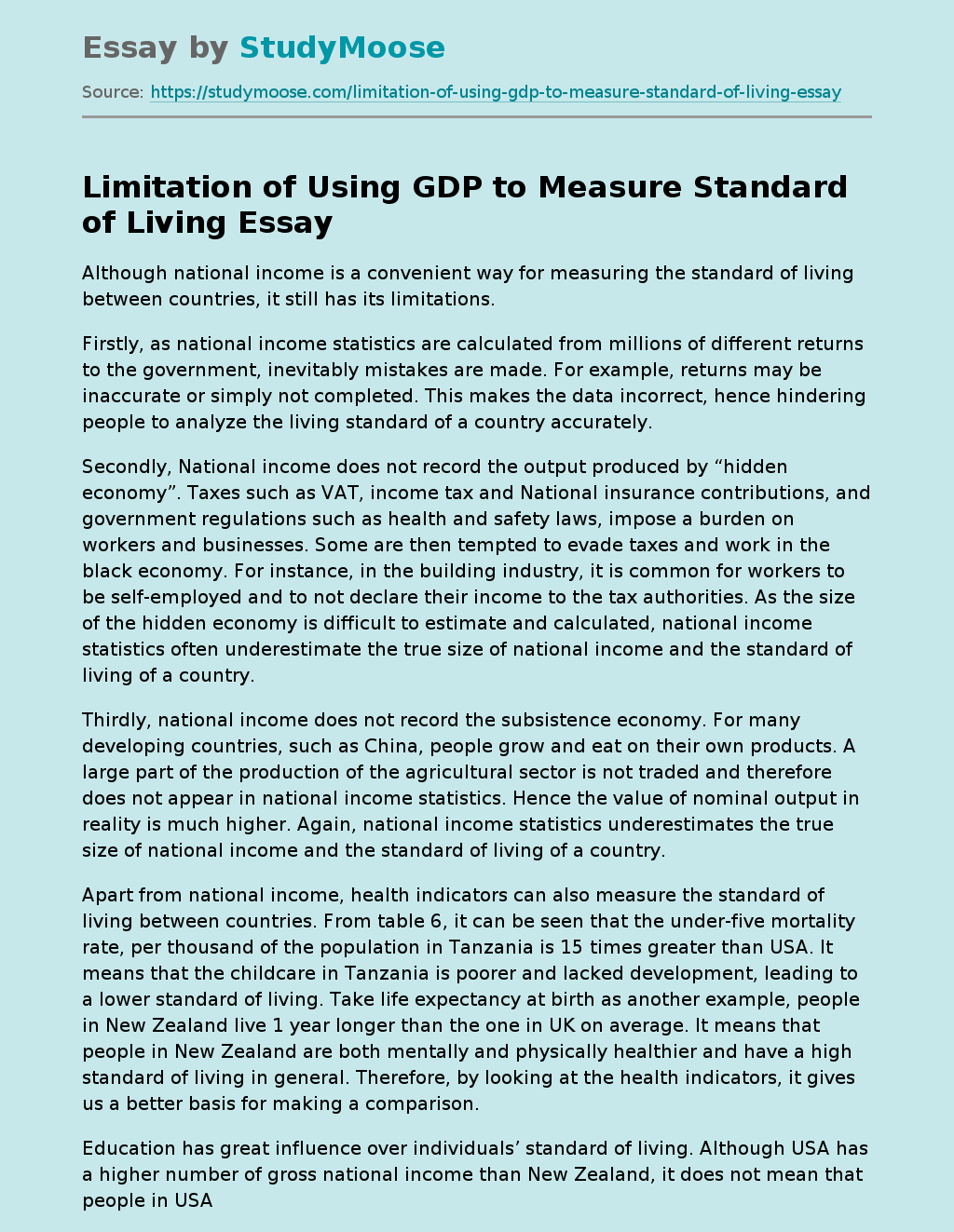