Early Childhood starts from birth. It is the time when infants form it’s first ever attachment to their primary carer. Harlow challenged Freud’s ‘cupboard love theory’ by conducting an experiment called ‘Harlow’s Monkeys’. Newborn monkeys were separated from their mothers and were isolated in individual cages. They were also provided baby blankets and 2 surrogate mothers; a wired monkey with a baby bottle attached and another surrogate mother with cuddly terry cloth but no bottle attached.

Harlow found that the baby monkeys were attached to the cuddly mother despite the fact that it doesn’t provide food.

Don't use plagiarized sources. Get your custom essay on
“ Lifespan development – stages and theories ”
Get custom paper
NEW! smart matching with writer

He also said that the baby blankets gave security to the monkeys so that they can examine their environment. Harlow then concluded that monkeys have an instinct to seek comfort as much as their need for food or nourishment. Schaffer backed up this theory by saying that infants not only need feeding but also stimulation and responsiveness from their primary carer.

A lot of people have criticized Harlow’s experiment.

It made a negative impact and said to be ‘unnecessarily cruel and unethical’[1]. Based on this theory, monkeys are the only mammals closest to humans, but people will never know if the outcome would be the same if the experiment was conducted on humans. The result might or might not validate this theory. However, one psychologist who was greatly influenced by Harlow’s experiment was John Bowlby.

Bowlby made an investigation as to whether maternal deprivation affects the behavior of children and if the effects last through its life development.

Bowlby made the experiment himself, which means that the experiment might be bias to prove his hypothesis. Also, Bowlby was asking the participants to reminisce in the past that may cause it to be inaccurate. Rutter accused Bowlby of not identifying between privation and deprivation. Rutter reassessed the maternal deprivation in 1972. He argued that deprivation refers to a loss or damage to an attachment while privation is the failure to develop an attachment.

Mary Ainsworth then measured, identified and categorized what types of attachment is formed during infancy to early childhood known as the ‘Strange Situation’. The experiment was conducted in a place unfamiliar to the child, and observations were made where mother and stranger interacts with the child, in different settings and records the child’s reactions. Ainsworth found three types of attachment: secure, insecure, and avoidant. The theory suggests that infants who have established a secured attachment have the correct balance while the other two types were unbalanced on either high levels of environment-directed behavior or the baby is ‘preoccupied with the caregiver to the detriment of exploration and play’[2].

The strange situation shows the quality of relationship, reaction and attention that an infant receives from the primary carer. It reflects the type of relationship that the primary carer builds with the infant. Main et al also backed up this theory by saying that if the circumstances stayed then attachment consistently stays the same. On the other hand, Vaugn et al (1980) attachment may change when family circumstances change, attachment also might differ for each parent (Main and Weston, 1981). Main and Hesse stated that some babies do not comply with any of the three types that lead them to identify a fourth attachment. Marrone also criticized the procedure as a stressful event for the baby.

The attachment individuals develop in infancy and childhood affects development in adolescence. Adolescence is the transitional period from childhood and adulthood. Coleman stated that an important aspect in making theories about adolescence is a focus on personal identity among cross cultures. Coleman then said that while other theories focuses on helping us understand adolescence. Unlike Hall’s and Erikson’s theory which dwells on conflicts that occur in adolescence, Coleman believed that what was needed is also a ‘theory of normality’. [3]

The theory is based on an observation of gender mixed children and adolescents (6-17) and what issues they were going through. There is no solid pattern to a specific age and there is a wide variable in personal circumstances. The results were that self-consciousness, sexuality and parental relationships change as they age. Concerns of different issues were also dealt with at different stages of adolescence for both genders.

Coleman then stated that Adolescents should deal one problem at a time to prevent chaos and adulthood becoming problematic. Contrary to this theory, every individual goes through different types of issues and maybe more than one at a time. It all depends on the extremity of the problem and the personal circumstances of the individual. Adolescence involves a number of changes and transitions from childhood to adulthood.

Gillian Stanley Hall made the first and formal theory of adolescence. Hall argued that adolescence is a time of ‘Storm and Stress’. Hall believes that ‘individuals repeat the biological and cultural evolution of humans’[4]. Evidence suggests that emotional responses from adolescents are deeper and more elusive than those other stages of lifespan development. Hall also believed that some adolescents display a serious indication of this theory such as delinquent behavior and mental health illness. 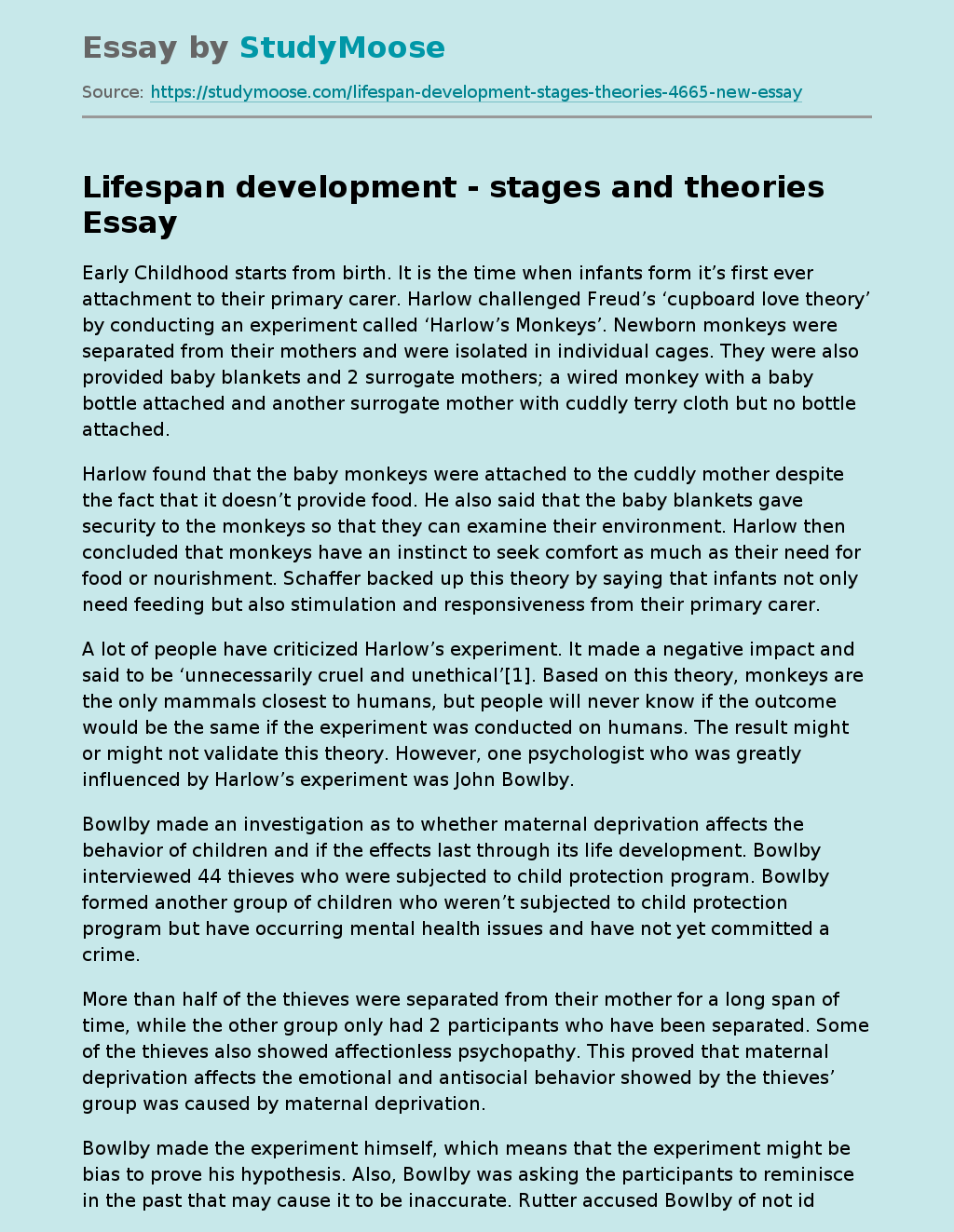