Have you ever lived in an extreme environment? In ancient times, humans use to hunt animals for their fur and skin to make warm clothes in the winter time. Without the clothes, humans would have been exposed to frostbite, frost nip, and even hypothermia. The central idea or theme of ‘Life of Pi’ by Yann Martel and ‘The Story of Keesh’ by Jack London is survival in extreme environments.

Pi in ‘Life of Pi’ by Yann Martel, took charge of his survival when he was stranded in the Pacific Ocean.

Don't use plagiarized sources. Get your custom essay on
“ “Life of Pi” by Yann Martel and “The Story of Keesh” by Jack London ”
Get custom paper
NEW! smart matching with writer

In the text it says, ‘…It was enough to make me go raving mad. I have never known a worse physical hell than this putrid taste and pasty feeling in the mouth, this unbearable pressure at the back of the throat, this sensation that my blood was turning to a thick syrup that barely flowed’ (Martel 81). This shows that Pi lacked the basic necessities that he needed to survive, such as food, water, and shelter.

Since Pi did not have what he needed, he used the resources he had around him to ensure his survival. In the text, Pi was described as very dependent on his family. When Pi was stranded in the dangerous Pacfic Ocean, Pi realized that he had lost everyone he loved. Even though he lost his family, his will to survive was still strong.

‘The Story of Keesh’ by Jack London explains how in an harsh Arctic environment, a boy names Keesh uses his intelligence to become a great hunter, feeds his village, and eventually rises to becoming village chief.

"Life of Pi" by Yann Martel and "The Story of Keesh" by Jack London. (2020, May 08). Retrieved from http://studymoose.com/life-of-pi-by-yann-martel-and-the-story-of-keesh-by-jack-london-essay 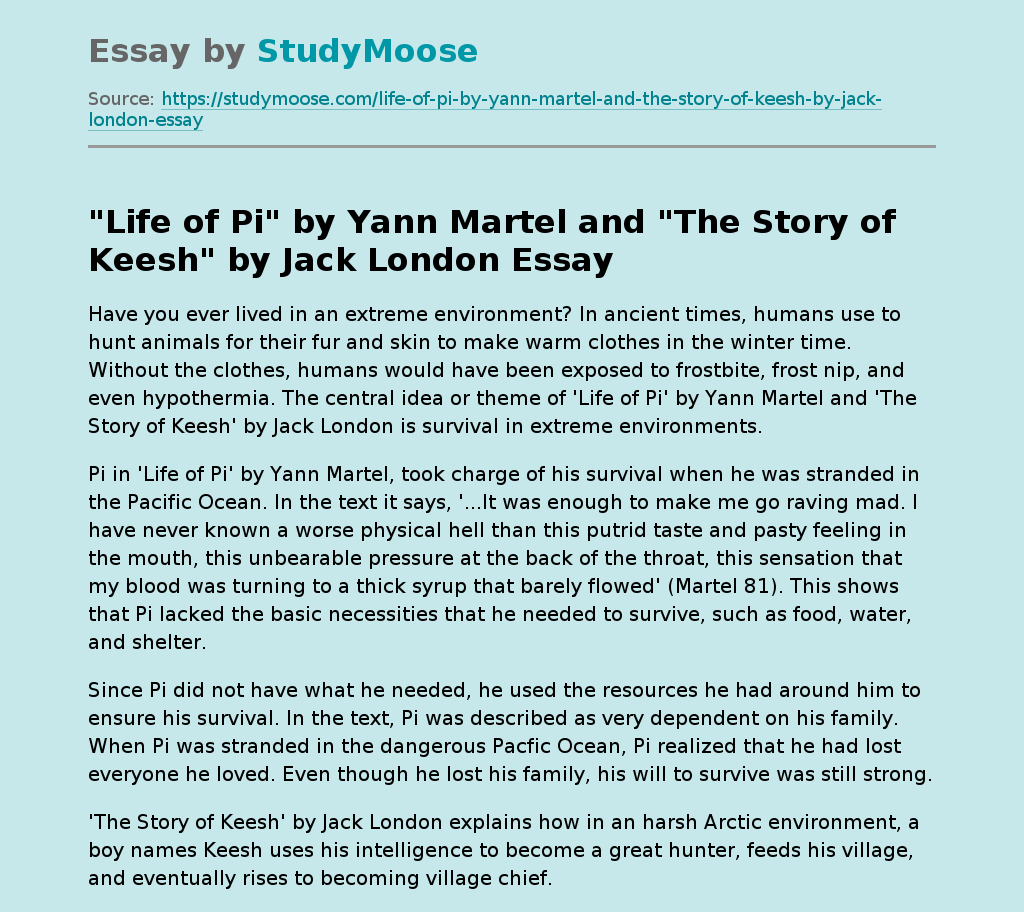