Life lessons that we get in the Last Leaf

Love and friendship happens to be one of the major themes of the short story ‘The Last Leaf’. Johnsy and Sue are friends in every sense of the word, and Sue dearly loves Johnsy. She tries to support Johnsy spiritually as well as morally when Johnsy was ill. Extracts from the story: “Why, the doctor told me this morning that your chances for getting well real soon were – let’s see exactly what he said – he said the chances were ten to one! Why, that’s almost as good a chance as we have in New York when we ride on the street cars or walk past a new building.

Don't use plagiarized sources. Get your custom essay on
“ Life lessons that we get in the Last Leaf ”
Get custom paper
NEW! smart matching with writer

” “Dear, dear!” said Sue, leaning her worn face down to the pillow, “think of me, if you won’t think of yourself. What would I do?” (when Johnsy was talking about her death?)

Hope is yet another one of the major themes in this story. The entire story basically revolves around hope.

After all it was hope that had augmented Johnsy’s disease (?) and in the end, hope was what kept her alive. Extracts from the story: “because I want to see the last one fall. I’m tired of waiting. I’m tired of thinking. I want to turn loose my hold on everything, and go sailing down, down, just like one of those poor, tired leaves.” I’ve been a bad girl, Sudie,” said Johnsy. “Something has made that last leaf stay there to show me how wicked I was.

Johnsy was a big pessimist (she was a bitch c: I honestly wanted her to die) and she couldn’t think of anything but dying. Extracts from the story: When the last one falls I must go, too. I’ve known that for three days. Didn’t the doctor tell you?” “It is the last one,” said Johnsy. “I thought it would surely fall during the night. I heard the wind. It will fall to-day, and I shall die at the same time.”

Where Johnsy had become a hardcore pessimist, Sue hadn’t lost the last shred of hope and she had a rather optimistic approach. She was constantly trying to support Johnsy, who always talked about dying still Sue didn’t stop supporting her and succeeded (at the end) although at the cost of Mr. Behrman’s life.

Extracts from the story:

Why, the doctor told me this morning that your chances for getting well real soon were – let’s see exactly what he said – he said the chances were ten to one! Why, that’s almost as good a chance as we have in New York when we ride on the street cars or walk past a new building. Try to take some broth now, and let Sudie go back to her drawing, so she can sell the editor man with it, and buy port wine for her sick child, and pork chops for her greedy self.” “Couldn’t you draw in the other room?” asked Johnsy, coldly. “I’d rather be here by you,” said Sue.

O Henry was an asshole and a sadass pathetic cunt. He leaves hints of death and decay everywhere, literally everywhere. The ivy vine was dying. Johnsy was dying. The ivy vine was dying for it was the season of autumn; the tree had shed about 95 leaves in just 3 days. Johnsy was dying of pneumonia and fortunately she survived although fortune didn’t shine upon Mr Behrman as he died of the same disease a few days later depicting a serene instance of self sacrifice. “Six,” said Johnsy, in almost a whisper. “They’re falling faster now. Three days ago there were almost a hundred. It made my head ache to count them. But now it’s easy. There goes another one. There are only five left now.” “Five what, dear? Tell your Sudie.”

“Leaves. On the ivy vine. When the last one falls I must go, too. I’ve known that for three days. Didn’t the doctor tell you?”

Life lessons that we get in the Last Leaf. (2016, Sep 24). Retrieved from https://studymoose.com/life-lessons-that-we-get-in-the-last-leaf-essay 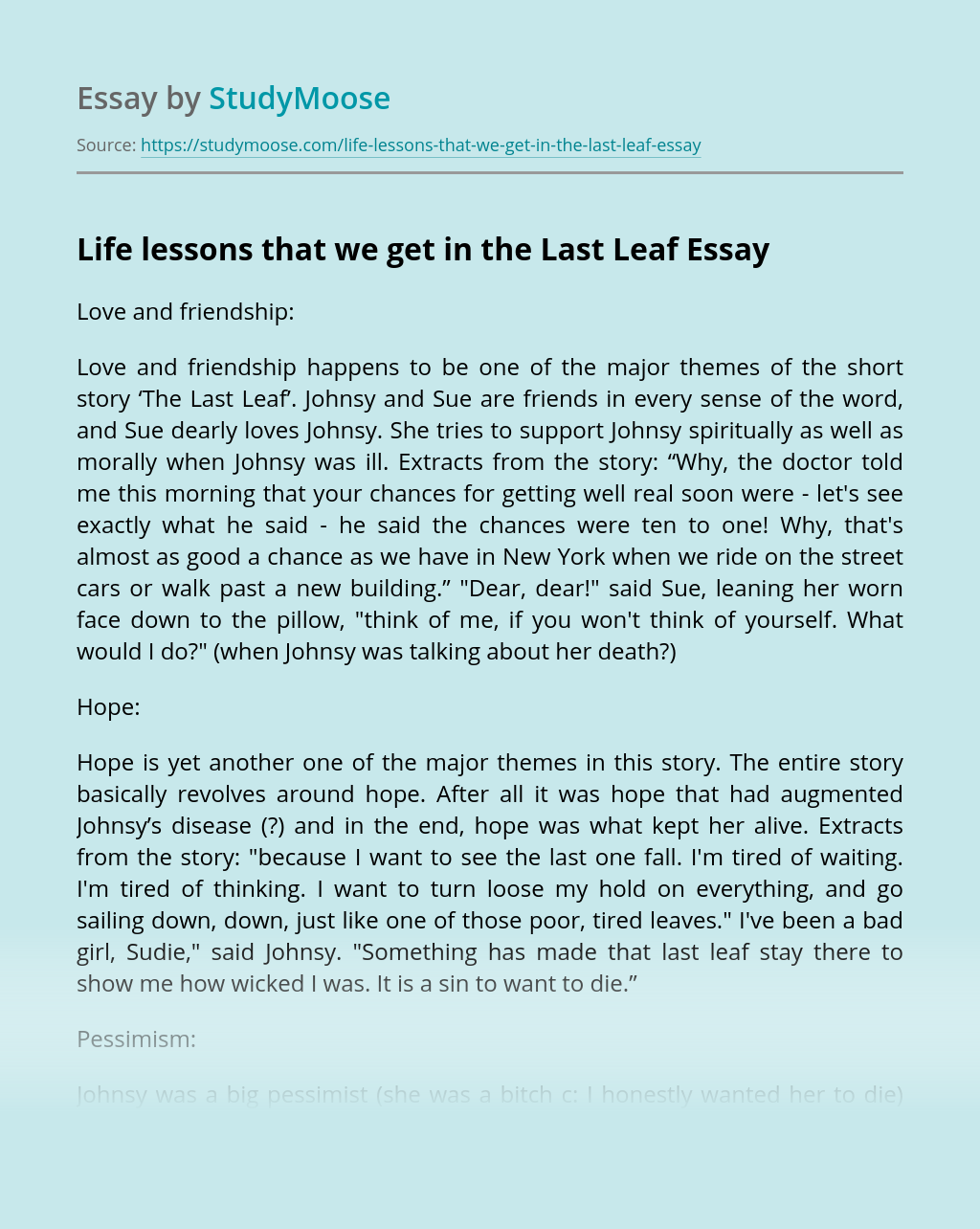