Life is full of challenges Essay

Don't use plagiarized sources.
Get Your Custom Essay on Life is full of challenges Just from $13,9/Page

Although he is a very experienced jumper, one day, the lines of his parachute twisted and caused him to spiral down out of control. As he explains, “The twists in the lines caused my parachute to take on an asymmetrical shape […] The problem occurred when the turn quickly became a rapid, diving downward spiral that was spinning me a full 360 degrees about once every second” (7). On the other hand, the fear that Sally experiences in “Neighbours,” is not a physical fear of death, but rather a fear of another culture.

Sally is a Chinese immigrant who fears not understanding Canadian culture and not fitting in.

For example, “Sally is not a Canadian, but she hopes one day she will be […]” (1). In addition, at the time, she feels “inadequate” (4) and “disorientated” (8) due to a lack of understanding. McCormick and Chao also present other situations that involve mental and emotional challenges. When McCormick realizes that his expertise would not be able to solve the problem, he has the challenge of accepting this fact, “Having successfully completed over 2100 jumps without having to resort to my second parachute, it was hard for me to believe I had really encountered a problem I could not solve” (7). Sometimes, being overconfident is harmful because it interferes with our ability to make the correct decision.

In the end, McCormick faces his “dragon” and overcomes his adversity, “The real dragon is the self-doubt we carry within us” (19). While McCormick’s success is admirable, he overcome his self-doubt and solves his problem, Sally receives greater advantages from taking the risk of being honest about her personal situation. Sally takes a big risk immigrating to Canada. She leaves her relatives, culture, and language behind in China. Sally meets a kind elderly couple, Elizabeth and Joe who invite her to their apartment for a cup of tea and watch the fireworks. They are generous and even offer her a free refurbished vacuum.

You may also be interested in the following: life is full of mystery, challenges in my life essay, essays about life challenges

Life is full of challenges. (2016, Aug 22). Retrieved from https://studymoose.com/life-is-full-of-challenges-essay 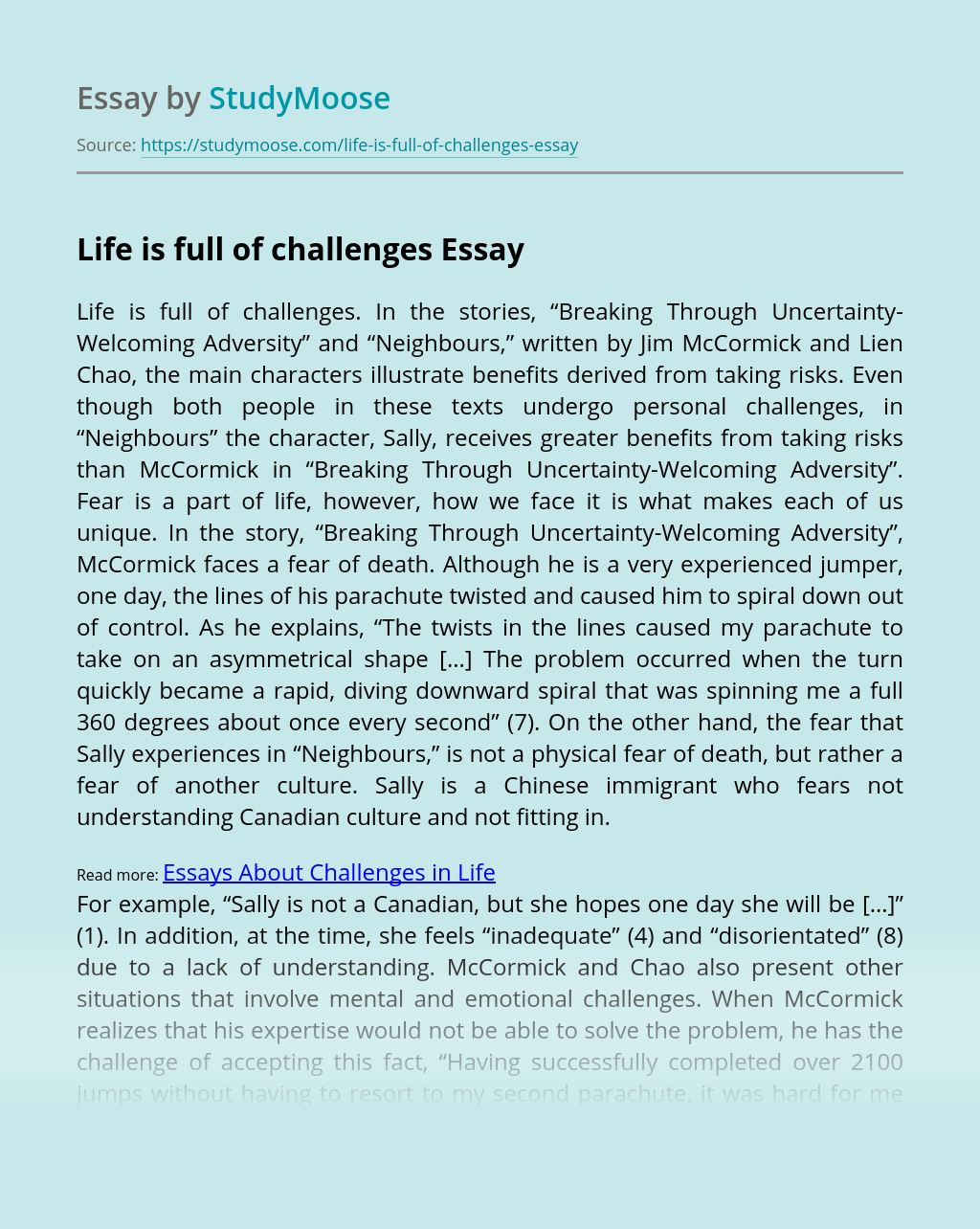 Willen hospice cares for people who can no longer get their illnesses treated. They work around Milton Keynes, Bedfordshire and Northamptonshire. Willen Hospice is a charity and a charity is a business that requires funds from the NHS and general people who donate, it is also non-profitable business. Willen Hospices aim and objective is: “Our... VIEW ESSAY

As an avenue of entertainment and communication, and as a research and reference tool, the internet has had a huge impact on the modern societies of developed nations. At the same time, there is concern that the disadvantages and negative influences may outweigh the benefits to the society. This essay argues that, in the last... VIEW ESSAY

1) I could see myself enjoying Alex as a manger and not. Then again, I think every employee enjoys and does not enjoy their managers. Specifically if I were Melinda I’d find my self-enjoying his positive feedback of him saying, you are one of the top five sales people in the company. I think he... VIEW ESSAY

When allocating work, what things should be taken into consideration? When Allocating work you need to implement a clear and precise goal that is achievable within the given time. The availability, knowledge and skills of the staff need to be considered before assigning them to a particular role to ensure the best outcomes. Why are... VIEW ESSAY