I am going to speak about the great Indian freedom fighter ‘Kappalottiya Tamilian’ V. O. Chidambaram Pillai. He popularly known by his initials V.O.C was one of the most prominent lawyers in 19th century British India. Chidambaram Pillai’s rebellious attitude and his courage to act against the British government, the English stripped the title of barrister associated with his name. It was his brave nature that won V.O.C the name ‘Kappalottiya Tamilian’ in Tamil Nadu, which translates to ‘The Tamil Helmsman’ in English.

Don't use plagiarized sources.
Get Your Custom Essay on Life History of Voc Just from $13,9/Page

V.O.Chidambaram Pillai was born on 5 September 1872 in Ottapidaram, Tuticorin district of Tamil NaduState of India, the eldest son of lawyer Olaganathan Pillai and Paramayee Ammal. V. O. Chidambaram Pillai enrolled in schools in his native Ottapidaram and nearby Tirunelveli. V.O.C started working in the Ottapidaram district administrative office after the end of his school education. It was only a few years later that he enrolled in law school and completed law studies to become a lawyer like his father Olaganathan Pillai.

V. O. Chidambaram Pillai entered into active politics in the year 1905 by becoming a member of the Indian National Congress. The Swadeshi movement in India was already at its hilt during this time and leaders like Lala Lajpat Rai and Bal Gangadhar Tilak were trying their best to put an end to British Imperial coercion of trade.

After joining the Indian National Congress, V. O. Chidambaram Pillai wholeheartedly immersed himself into Swadeshi work to secure independence for India. Part of his Swadeshi work was to put an end to the monopoly of British shipping in the coasts of Ceylon. Inspired by freedom fighter Ramakrishnananda, he set up the Swadeshi Steam Navigation Company on November 12, 1906.

V.O.C’s ships started regular services between Tuticorin and Colombo. His shipping company was not only a commercial venture, it was also the first comprehensive shipping service set up by an Indian in British India.

V O Chidambaram Pillai was the author of a couple of novels; he translated several James Allen works in Tamil and made compilations of important Tamil works like the Thirukural and the Tolkappiam.

V O Chidambaram Pillai spent such an impoverished lifestyle after he was released from prison that Justice Wallace who sentenced V O C to prison restored his bar license. But V O C was never successful in repaying his debts and lived in poverty till the end of his life on November 18, 1936. V O Chidambaram Pillai breathed his last at the Indian National Congress office in Tuticorin.

Vallinayagam Olaganathan Chidambaram Pillai is remembered as one of the most important figures in India’s struggle for independence. He is much loved and celebrated in the Tamil Nadu society till today. 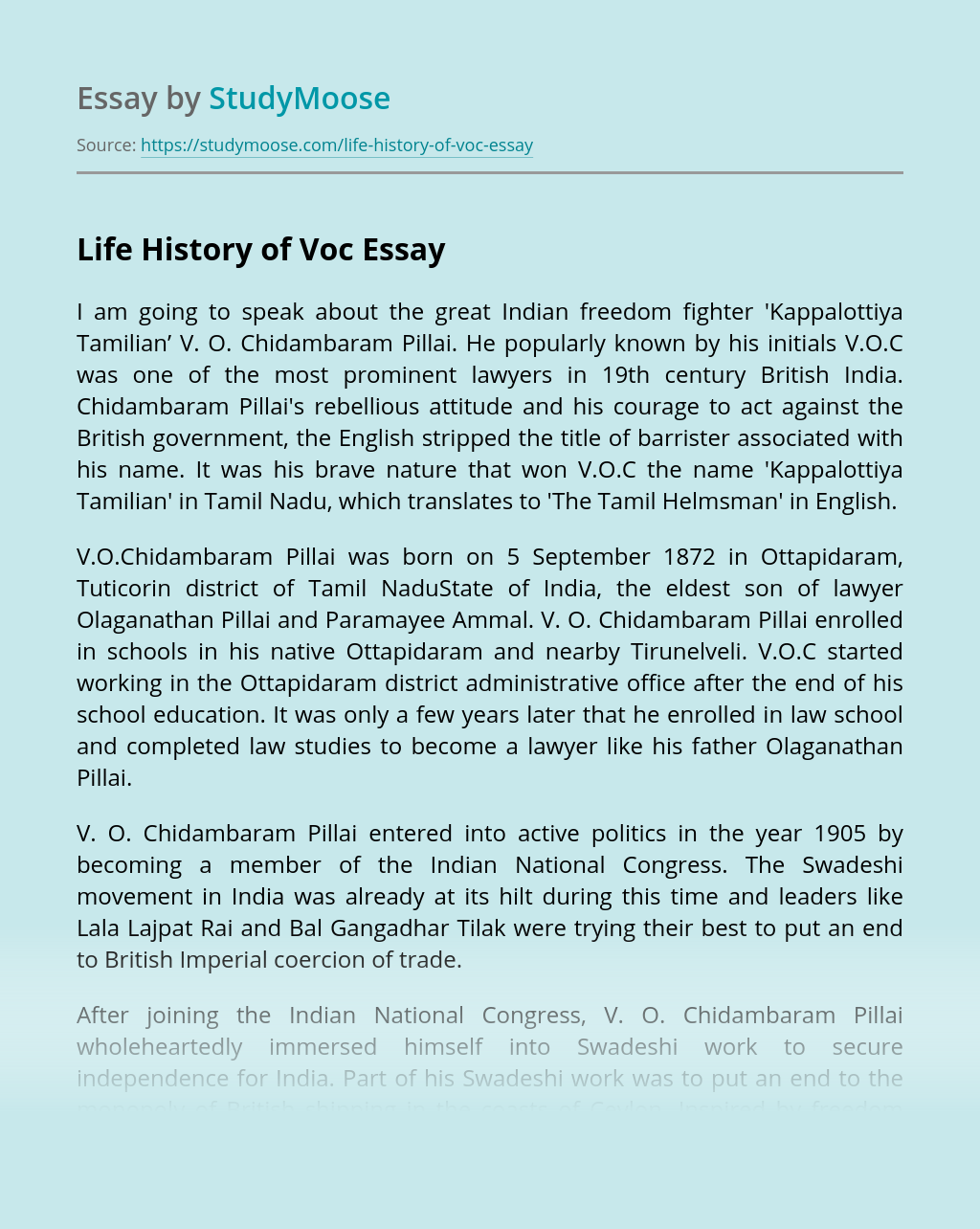 Walkers’ upbringing in Guildford, surrounded by country has left in him with a feeling of love when it comes to Britain’s landscapes that he wants to show it off in his images, in any which way he can. This essay compares and contrast two works by Tim Walker that are identifiable as his signature style,... VIEW ESSAY