Life from An Outsiders Perspective

In chapter one, the raconteur who is Ponnyboy was going back home after watching Paul Newman’s movie. In his way, he thought how he likes Paul Newman’ s look. He was alone because his brothers don’t like watching movies. They think watching movies are dull. Besides walking alone is risky for his gang. His gang is Greasers, they are the poorer group and they live in the east side. When they walk alone Socs regularly blindside them. Socs are the other society who lives in the west side and they are richer than greasers.

Don't use plagiarized sources. Get your custom essay on
“ Life from An Outsiders Perspective ”
Get custom paper
NEW! smart matching with writer

Ponyboy’ s gang’ s name is Greasers because they put Grease on their long hair. They often get into conflicts. They have to carry switchblades to protect themselves from Socs. While Ponnyboy was in his way, a blue Mustang was following him. They were Socs. They beat him. They cut the underside of his chin. Then all Greasers came to rescue him. Darry started to scold Ponnyboy for walking alone but Sodapop stopped him.

If I were Ponnyboy, I would ask someone to pick me up. I would not walk alone because it is risky. Chapter 1 is telling us the gang member’ s physical appearance and personality. Also we understood why 2 society are enemies in this chapter.

Ponnyboy has 2 brothers: Sodapop the middle brother and Darrel (known as ‘Darry’) the elder brother. Their parents died in a car crash so they live together. Dally always hollering Ponnyboy. Sodapop is different for him, Sodapop always understand him, he never hollering anyone.

He smirks all the time and he is cheerful. He also talked about Johnny. Johnny is the gang pet he is the youngest after Ponnyboy. Also, Johnny has beaten by Socs. His parents always had a fight and his father always beats him. Johnny is Ponnyboy’ s best friend. Two-bit is the most enjoyable and eldest member in the gang. He has gray eyes and a wide grin. His real name is Keith. He is famous for shoplifting. Steve Randle is Sodapop’ s buddy since grade school. Steve is seventeen years old. Sodapop and Steve work in gas station because they are buddies and his speciality is cars. He is arrogant, smart, tall and slim. He sees Ponyboy as Sodapop’s annoying kid brother. Dallas Winston is thougher than other members in greasers and he is a hood. Dallas used to run work with lots of gangs in New York and he is known as Dally. He has icy blue eyes and he does not put Grease in his blond hair like the rest of the gang. Dally’s violent bents make him more dangerous than the other greasers, and he takes pride in his criminal record.

Next night Johnny, Dally and Pony went to drive in cinema. They sat behind 2 Soc girls. Dally started to talk in immature way. With his talk the girls embarrassed. Then Dally went to buy a coke. Ponnyboy started to talk with the redhead girl, Cherry Valance. When Dally came back and gave a coke to Cherry, she threw it in his face. Dally started to touch her however Johnny warned him and stopped him. Then Dally left them. Cherry and Marcia – the other Soc girl- invited them to watch the movie together. Then Two-bit came and said that there will be a fight between Tim Shepard and Dally because Dally has slashed Tim Shepard’s tires. Then Cherry and Ponnyboy went to get popcorn and Ponnyboy told about Johnny beaten by Socs. Then she told him that Socs have problems too but Ponnyboy didn’ t believe her.

If I were Ponnyboy I would not sit with Cherry and Marcia because they are Soc girls. If a greaser hangs out with a soc it will be bad for both of them. In this chapter, we can understand that there is not so much difference between Socs and Greasers. In this chapter, we met with Sherri Valance known as ‘Cherry’ the redhead. She is a Soc girl and she is the cheerleader. She feels comfortable when she talks with Ponnyboy.

During the discussion between Ponyboy and Cherry, they find they have a surprising amount in common. They both like reading and watching sunsets. After their talk about Socs and Greasers, they decide that the main difference between their society is that Socs are too cool but the greasers feeling more intensely in everything. Ponyboy realized that even they come from different classes, he and Cherry watch the same sunset. Then a blue Mustang came. The Mustang belonged to Bob and Randy, Cherry’s and Marcia’s Soc boyfriends. Randy and Bob got out from the Mustang. Ponyboy noticed that Bob wears three heavy rings on his hand. Bob is the Soc who beat Johnny. The greasers and Socs almost get into a fight, but the girls accept to leave with their boyfriends. Then Johnny and Ponnyboy fell asleep in the lot. Then Johnny woke him and told him to go home. Ponnyboy walked home and noticed that Darry was angry with him for staying out so late. In the argument, Darry slapped Ponyboy. No one in Ponyboy’s family has ever hit him before, and Ponyboy ran away from his home. Ponyboy finds Johnny in the lot. He told Johnny that they will run away. Johnny agrees to run away without hesitating. The boys decide to walk through the park and decide that they really wanted to leave.

Cherry Valance is Bob’s girlfriend. Cherry likes Dally’s uniqueness and tells Ponyboy that she could fall in love with Dally. Marcia is Cherry’s friend and Randy’s girlfriend. Marcia is a pretty, dark-haired Soc. Randy Adderson is Marcia’s boyfriend and Bob’s best friend. Randy is a handsome Soc. Bob Sheldon is Cherry’s boyfriend. Bob has dark hair Soc who beats up Johnny before the novel begins. Bob has a set of three heavy rings. If I were Ponnyboy I would not run away because it is risky to spend all night by yourself.

Life from An Outsiders Perspective. (2021, Dec 02). Retrieved from https://studymoose.com/life-from-an-outsiders-perspective-essay 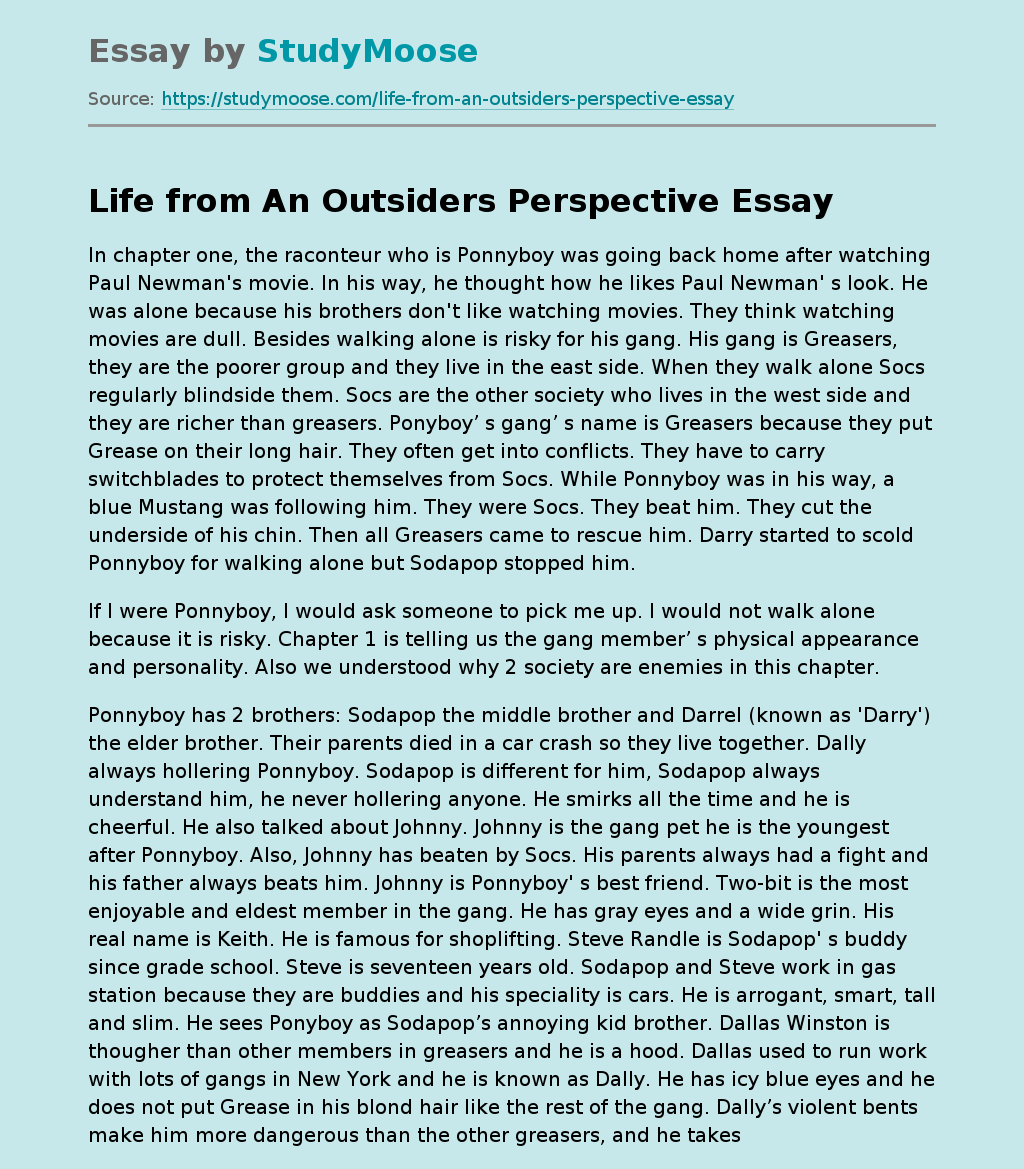