In the early 1950’s, Harry S Truman (president of the United States), created the ‘American dream’. The ‘American dream’ was the way American citizens helped improve their prospects. After World War II the money in America drastically raised, due to the increase of weapons and goods sold too many countries. Overall between 1945 and 1960 the money earned doubled from $284. 6 billion to $502. 6 billion per year. With the Americans getting richer they all bought houses and cars. Part of the ‘American dream’ was to own and live in a nice suburb; houses designed for richer people, own a nice car which would be kept in a nice garage.

Don't use plagiarized sources. Get your custom essay on
“ How life changed in 1950’s America? ”
Get custom paper
NEW! smart matching with writer

They also needed to have every luxury item coming into existence. During this era people would never want to be outdone by their neighbour, so if their neighbour got the new gadget, they would have to get a better one. The entertainment for the adults was quite popular, as there wasn’t many television sets around in the early 1950’s.

There was many singers in the 1950’s, Dean Martin, Frank Sinatra, Nat king Cole and Doris day a select few. These singers would usually dress in suits with ties and nice smart dresses. Their music compared with modern day music is quite dull, but it was the main music in the 1950’s.

For the rich people who had TV’s, there were many TV shows such as; ‘I love Lucy’, ‘Lassie’ and ‘Father knows best’. These shows were based around the perfect family, a father who ran the family, a mother who cooked, cleaned and looked after the kids and two children, a boy and a girl, who were brilliant at school and were never naughty.

A lot of movies were also based on these Television shows. About the mid 1950’s American culture changed a lot, this was due to the money increase in America, and the amount of pocket money given to children. As there was more money being given to children, there was more and more items of clothing and luxury aimed towards these children. They would aim these items at the children so they could make more money, as the children bought more, the parents gave more. The more the children got the more they wanted in other words.

But the children didn’t want what their parents wanted. If the parents wanted to buy a Frank Sinatra record, the children wanted to buy a totally different record such as Elvis Presley. The entertainment for the teenagers changed drastically. With Frank Sinatra and Dean Martin getting older, it was time for new, younger people too come in and take the world by storm. These new people were Elvis Presley and James Dean. Elvis and James were both seen as rebels by the older generation, but as heroes by the younger generation.

Elvis broke all the laws of music at the time, with his wacky dances and top button undone. He also made much faster music than the likes of Nat King Cole and Doris Day. James Dean was an actor whose motto was ‘Live free, die young and have a good looking corpse. ‘ This is ironic as he died young, just a couple of weeks after he finished filming his film, ‘Rebel without a cause’. ‘Rebel without a cause’ also broke many film rules as the mother ran the family in his household and the children smoked and drank alcohol in the streets. These sort of changes changed family life forever. 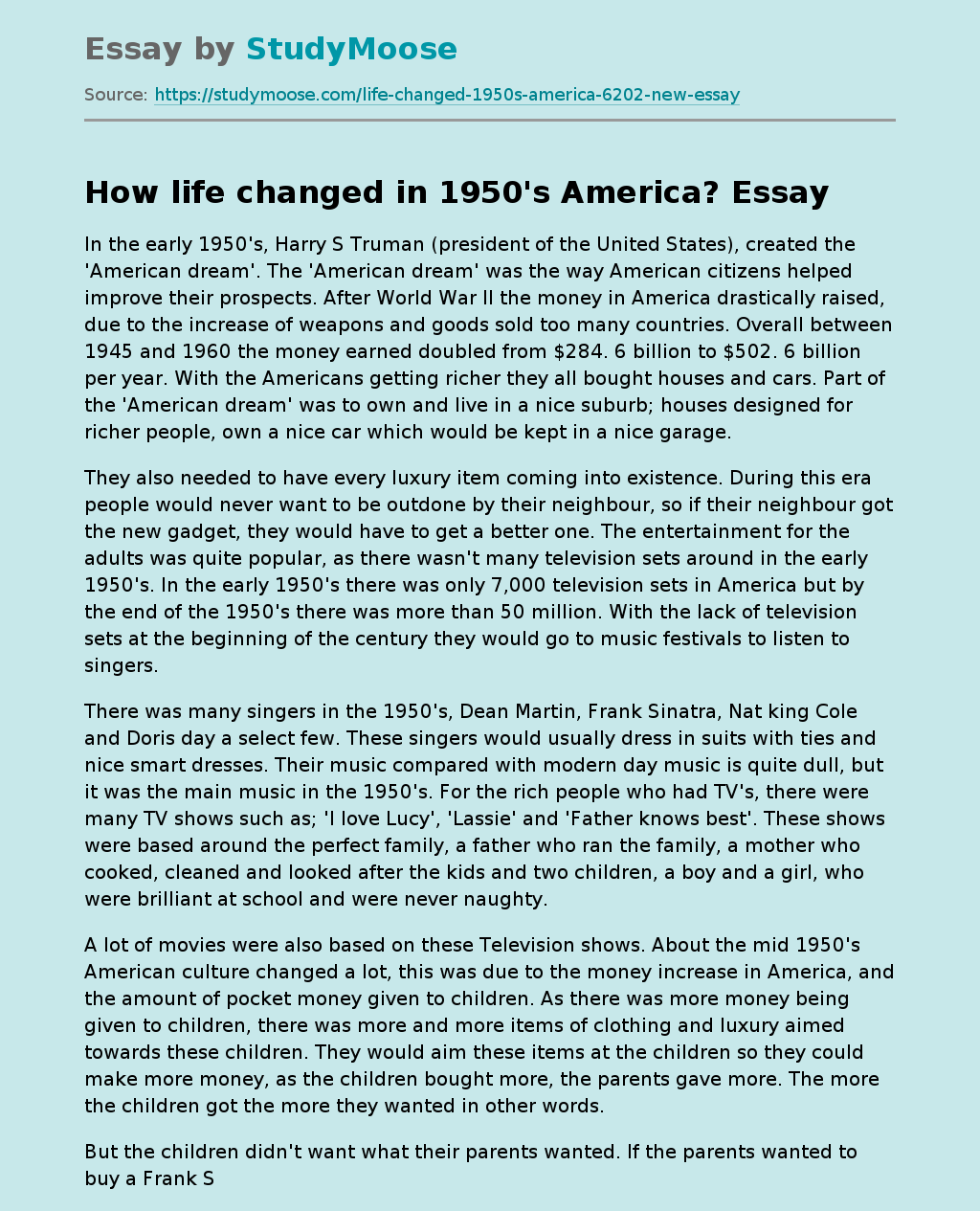