Life and Motives of Charles Manson, a Gang Leader

A paper which examines the life and motives of American cult leader, Charles Manson

Charles Manson Charles Manson. He and his cult, “The Family,” together killed seven people, bloodied and butchered. The people who he and others killed, the Tate and LaBianca families, were wealthy and well-off. What could have made them do such a thing without pity or remorse? Read on…….. MANSON: The Man Himself In 1954, Manson set up a commune-based cult, drawing in hippies, drifters. and the unemployed at the Spahn Ranch, near Los Angeles.

Don't use plagiarized sources. Get your custom essay on
“ Life and Motives of Charles Manson, a Gang Leader ”
Get custom paper
NEW! smart matching with writer

Manson had lovely ideas and his followers or “Family” regarded him as a Christ-like figure. They indulged in free love practices, pseudo religious ceremonies, and used drugs such as marijuana and LSD. The Black Panthers were a major black movement in the 1960’s. After killing a leader of this movement in self defence, Manson grew scared on the promise of revenge from the Black Panthers.

Scared, Manson ordered his followers to practice guerrilla tactics and they did so, without question.

Manson sad he taught love because in love there is no hatred, but John Flynn, a man who testified at his trial, testified to some very incriminating admissions by Manson. Barbara Holt, a “Family” member, fled the group before a raid. She later showed up as a prosecution witness, a potential danger to Manson, so faithful members of the “Family” tried to kill her with a hamburger laced with LSD. Before her testimony, another “Family” member, Gary Hinman, who had also fled he group, was killed because he had betrayed the “Family.

” As you can see, the punishment for crossing the “Family” was severe. Manson makes claims to thirty-five murders. Although he was convicted for others, there was not enough evidence to bring him to trial for the thirty five.

THE MOTIVE BEHIND THE MAN

The driving force behind Manson’s killing was hard to prove and hard to believe. Manson had a plan in his head. When the Beatles first released “The White Album,” it was a hit. Manson listened to it often. He had a great devotion to the Beatles, who he believed spoke to him across the oceans in their lyrics and songs. Manson saw the 4 Beatles as the 4 Angels that announced the ending of the world in the bible. (Armageddon) On “The White Album” there are two song titles containing the word revolution. These are “Revolution 1” and “Revolution 9.” Manson thought the Beatles were talking about a black/white revolution. The word rise can be found in “Revolution 9” and could be depicted as a prediction of a Black uprising. One song in particular, “Helter Skelter” seemed unexceptional to the normal ear, but was given a weird interpretation by Manson. Man saw the Blacks as stupid and felt he had to show “Blackie” the way.

His plan to kill seven wealthy white people and to blame it on the blacks would start his plan of a black/white revolution which he called “Helter Skelter.” He attempted to frame the black people by writing “Death to Pigs” in the victim’s own blood and carving the word “war” in the stomach of his victims. Manson denied allegations that this was the motive behind the murders but many of Manson’s followers said that Manson often spoke of this revolution, “Helter Skelter.” Another controversial song on the album was “Sexy Sadie.” It was believed by Manson that the song foretold his murder trial when Susan Atkins made a crucial mistake on the witness stand. She made the “Family” appear to be murderers of the seven butchered victims while Manson felt he was convincing the jury of their innocence. Manson believed he foresaw this even before the trial.

THE FOLLOWERS OF MANSON:THE FAMILY

The killers of the Tate and LaBianca families now serve life in prison. Four people, all part of the “Family” were convicted of these murders: Charles Manson, Susan Atkins, Leslie Van Houten, and Patricia Krenwinkle. It is interesting to see that most of the killers are women. Another woman, Linda Kasabian, who drove the killers to the murder scene, turned state’s evidence, and literally, got away with murder. Charles Watson was another member of Manson’s group and was a Texan citizen, so he was tried under Texan Law. The others were tried in Los Angeles. He was also given life imprisonment.

The trial, which lasted nine and one half months, cost Los Angeles one million dollars. Many people have wondered how these so called “normal” people could commit such morbid crimes and show no signs of regret or remorse. Its is suggested that Manson used threats, guilt, and partial fear to seduce these people into doing what he wanted. Manson’s followers were devoted to him, doing whatever he wanted. They so much believed in him that they did not question what they were doing.

Charles Manson is said to have kept a secret list of future targets, with graphic details of how he is going to “deal” with these people. Prisoners who have shared jail cells with members of the “Family” testify that this was a frequent topic of conversation among them. All individuals on the hate list were white (suggesting that Manson would blame the blacks) and the list seemed to deal with the rich and famous for whom Manson invented cruel tortures. Some examples: Frank Sinatra, skinned alive, Steve McQueen, boiled in oil, Doris Day, raped and impaled, Tom Jones, tongue cut off, Elizabeth Taylor, breasts cut off, Richard Burton, castrated, etc.

THE MANSON LIFE AND TRIAL

A movie, entitled “Manson” was taped prior to the trial in Los Angeles. It was questioned if the movie gave an accurate portrayal of the life of Manson, or if it made a mockery out of him. The information presented in the movie is considered to be a documentation of the life of the Manson Family. The film was taped prior to the trial and was ordered to be removed from public viewing because it was thought to be a possible influence on the jurors. The Manson trial lasted nine and one half months and cost Los Angeles tax payers one million dollars. Four people stood trial: Manson, Patricia Krenwinkle, Leslie Van Houten, and Susan Atkins. They were all convicted of five murders altogether. There were two other people with them on the night of the murders. Charles Watson was a texan citizen, and was deported to Texas to be tried under Texan law. Linda Kasabian turned state’s evidence and got away with murder.

All particpants in the murders, with the exception of Kasabian, were found guilty and were sentenced to death. This sentence was revoked and turned into life imprisionment. There was great concern for the possibility of the popular image of martyrdom being assigned to Manson and his “Family.” Manson used suggestion and passive hypnotism to make his followers answer any command of his. People did unquestioning acts of any sort, even murder at his whim. He found the fear in people and enjoyed playing on it. Manson’s followers frequently said, “He reflects back to you what you want to see.” Manson himself said: “You are using us fpr a scapegoat, trying to look past Nixon, and past Vietnam. I am only what your world made me.” Another quote of Manson’s is: “I hate the world I live in.”

By the age of thirty, he had fifty convictions against him. Manson believed in free love and experimentation with drugs. Followers of Manson came from all over the globe. They believed they had to go to the desert and bring along all the children they could convince to join the,. Children were not excluded from anything and this “freedom” appealed to may yound people. They could participate in free secual activities, experiment with drugs, or use guns and cars. Manson’s ranch became a home for runaways, people in trouble with they law, and hippires. Manson did not like hippies, and he said they were just trying to be different and were looking for trouble, hence the name he gave to them: “slippies.” Girls in Manson’s “family” made a ceremonial vest that tells the life of Manson in thread. Bruce Davis, Manson’s second in command, overdosed on LSD and was mentally and physcially disabled. On August 11, 1972, police raided the ranch and arrested the killers for auto theft with the intention to later convict them of the murders once they had firm evidence.

The motive was the strangest and most unbelievable thing that the police had to deal with. Manson saw the Beatles as prophets that described a race war between the whites and blacks. Manson planned to start this war up by blaming the murders of members of black society. Only it didn’t work out that way. Manson planned to hide in the desert until the war ended. Manson believed he would later have to take over because the blacks were inexperience leaders. He called this plan Helter Skelter. The seven deaths the “Family” were convicted of were oriented around the rich and famous. Sharon Tate, who was eight and a half moths pregnant, was hanged and her baby was cut out of her. She was the wife of movie director Roman Polanski. Abigail Folger was the heiress to the vast Folger estate and was killed along with her lover Voityck Fryowski, a famous writer. Jay Sebring was present at this gathering because he was a former boyfriend of Tate’s.

Life and Motives of Charles Manson, a Gang Leader. (2020, Jun 01). Retrieved from https://studymoose.com/life-and-motives-of-charles-manson-a-gang-leader-essay 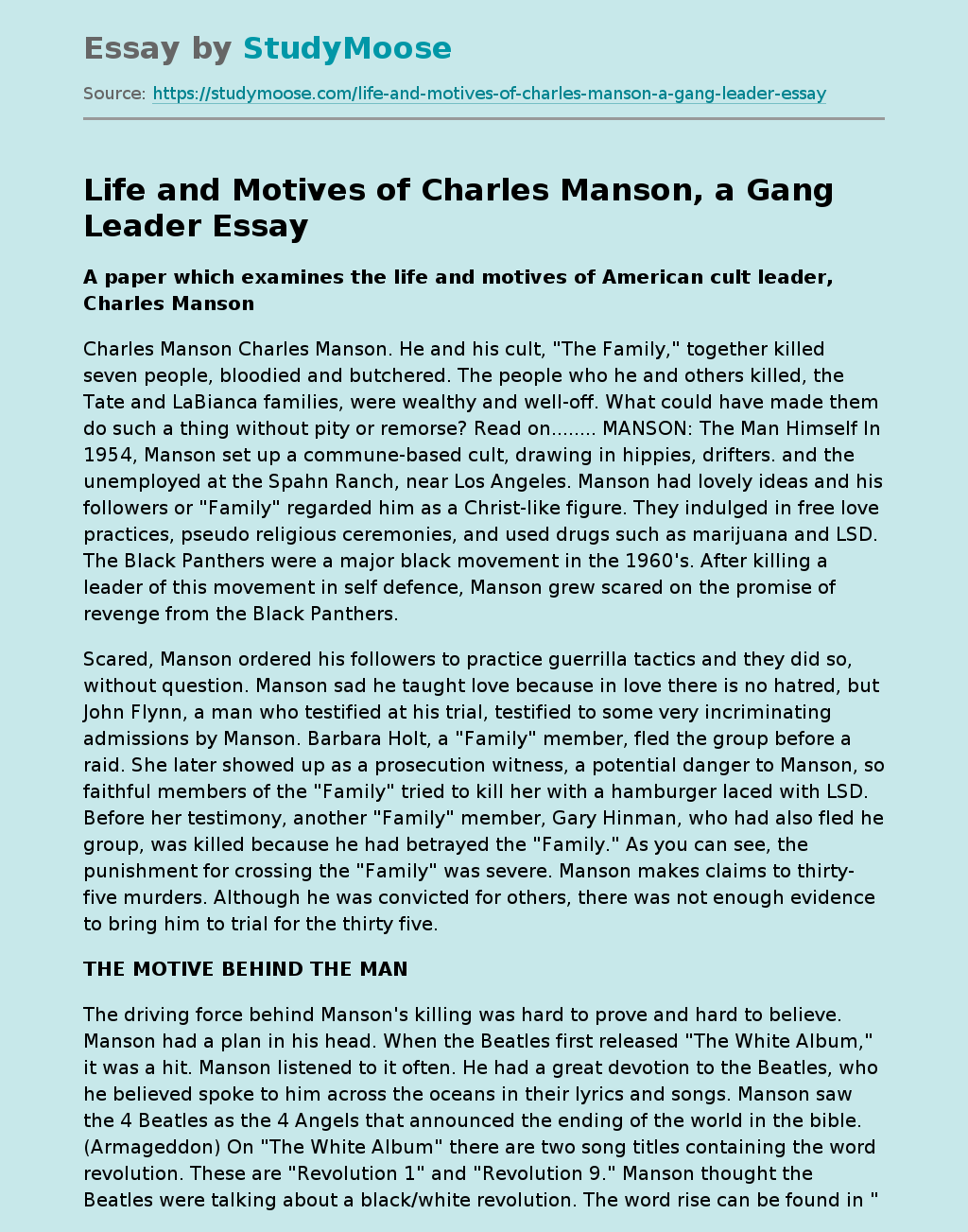